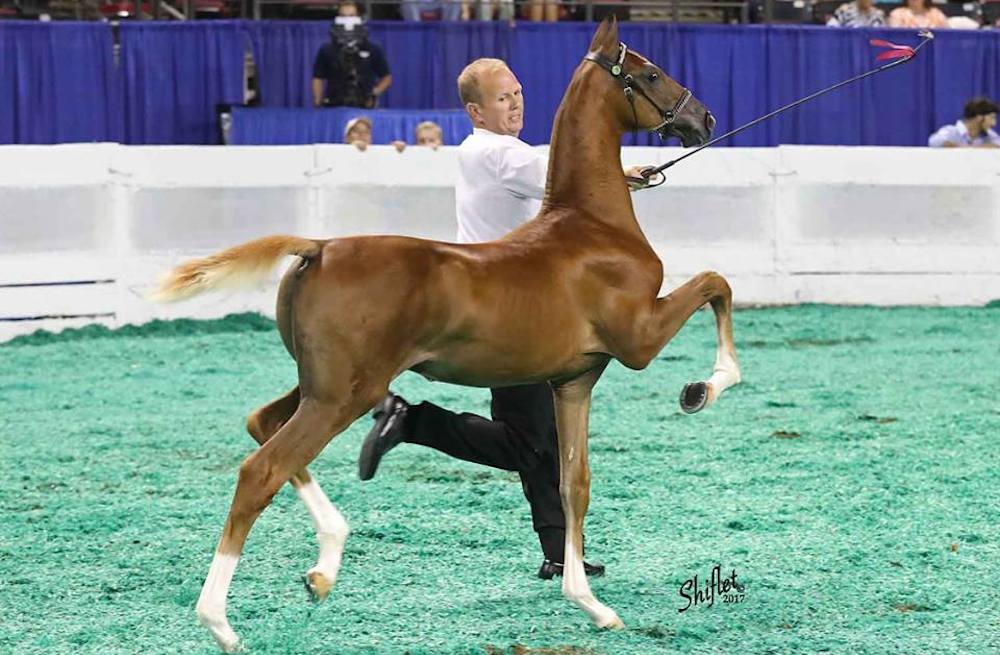 Saturday night at the World's Championship Horse Show was a big one for Willowbank Farm, as they captured both the ASR Weanling Futurity and Yearling Futurity with two of their outstanding colts.

Both colts were by the incredible stallion Undulata's Nutcracker, who stands at Willowbank. Weanling winner, Rogue One, out of Robert's Passion, and owned by Sandra Corney and Willowbank Farm, wowed the audience with his incredible motion. Guitar Murphy, out of Nanette Roulette and owned by Willowbank, displayed beautiful conformation to win the yearling futurity just six classes later. 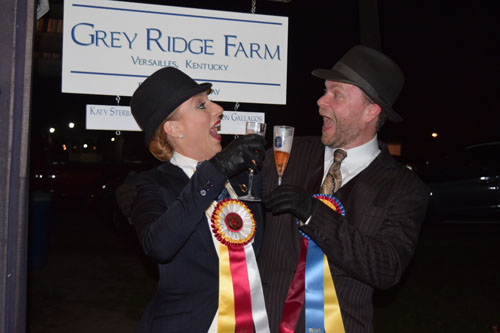 Tampa Charity may have been a testing site for dozens of new horse and rider teams for 2016, but it was not a warm-up show. Instead, it was like jumping right into the heart of show season, with ultra-competitive classes and barns that came from as far away as Kentucky.

For example, the Junior Exhibitor Five-Gaited classes contained five exceptional horses, all of which had a chance at the victory pass. King’s Carma and Nissa Sultan took the blue in the qualifier, with Tango Mango and Emily Candelaria earning the red ribbon. In the championship, however, Belle Reve’s So Photogenic and Rose Marie Wheeler took the tricolor and The Hathaway Man and Victoria Robinson earned the reserve.

Grey Ridge was one of the barns that made the long trek to Tampa, and it was well worth it for them. Among other wins, the barn dominated the eleven horse Adult Show Pleasure Championship when CH Mighty Thor and Michael Petty took the tricolor and Michelle Partridge rode Takin’ It To The Street to the reserve honors.

Besides the impressive level of competition, there was plenty of time for fun as well. One of the most interesting events took place on Thursday at Helen Rich’s property, just thirty minutes from the show grounds. Helen welcomed attendees off the chartered buses, and invited them to enjoy brunch as they watched a demonstration with her German Shepherd dogs. Afterward, everyone was free to walk around the grounds and visit her menagerie of animals.

The following night was the show’s exhibitor’s party, which included a live and silent auction, 50/50 raffle and a delicious dinner of chicken, mashed potatoes, green beans, salad, cake and more. Exhibitors also had the chance to meet and greet a number of NFL players who were on hand, and even hold a Super Bowl ring. 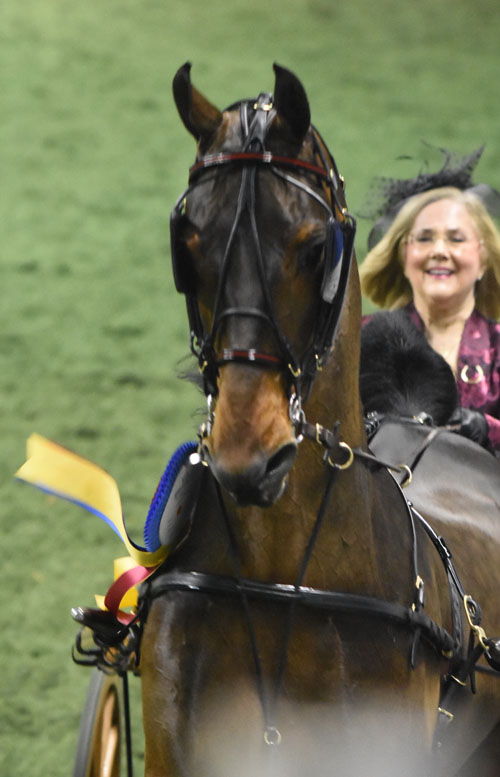 The Royal always brings with it a mix of emotions. For many it marks the end of show season or the end of a rider’s junior exhibitor career. Home to two national equitation finals, as well as many other National Championship classes, it comes with an immense amount of pressure. But there is a lighthearted side to the Royal, too, and this is seen most clearly in the ever-popular Donkey Races, hosted by the UPHA Young Professionals, and a well-attended exhibitor’s party where tables are set up all along the vendor hall for exhibitors to mix and mingle.

This year’s show saw beautiful fall weather, and a number of touching presentations. Since Wednesday of the show was Veteran’s Day, announcer Peter Fenton introduced veteran and exhibitor Dr. Alan Raun to center ring for the opening ceremonies, and “Doc Raun” read the names of many professionals from the show horse industry who have served in the military, whether in the United States or other countries.

Another moving presentation took place on Thursday night, when Solomon Gallagos was presented with the UPHA Caretaker's Award. Through the years, Solomon has taken care of horses such as World’s Grand Champions CH Sky Watch, CH Wild Eyed And Wicked and CH Memories' Citation, along with many others. He received a standing ovation from the crowd.

For all those who missed out on the “glory days” of horse showing, this year’s Stake Night gave a glimpse into how it must have felt, and we have an indomitable stallion named Marc Of Charm to thank for it. Saturday night’s session was one of the most exciting on record, with breathtakingly competitive classes from start to finish, but it was Marc’s win in the Five-Gaited World’s Grand Championship that clinched it — this one was going down in history as the night that the magic returned to horse showing.

The attempts began in 2011. He won the Three-Year-Old Five-Gaited class, the Junior Five-Gaited Stallion/Gelding class, the Junior Five-Gaited Championship, and even the Five-Gaited Stallion Stake. But that World’s Grand Championship kept eluding him. In 2011 he placed fifth, but it wasn’t too unusual — he was still young. In 2012 he placed fourth. At least his fans could console themselves with the fact that he had moved up a notch. But in 2013, in the prime of his life and after placing second in the stallion stake, he didn’t even make the workout and was pinned fifth again; to those who loved him, it was a huge shock. In 2014 he returned to win the qualifier, made the workout, but once more finished fifth.

Yet, through all this and despite all the highs and lows suffered by his fans and caretakers, the chestnut stud himself remained unperturbed, returning each year with Vedic calm and entering the ring with the same gusto to try his heart out on the Green Shavings again. And finally this year, in a storybook ending that brought tears of joy to many, after a six-horse work out, he won. It was a story that couldn’t have been invented had one tried. 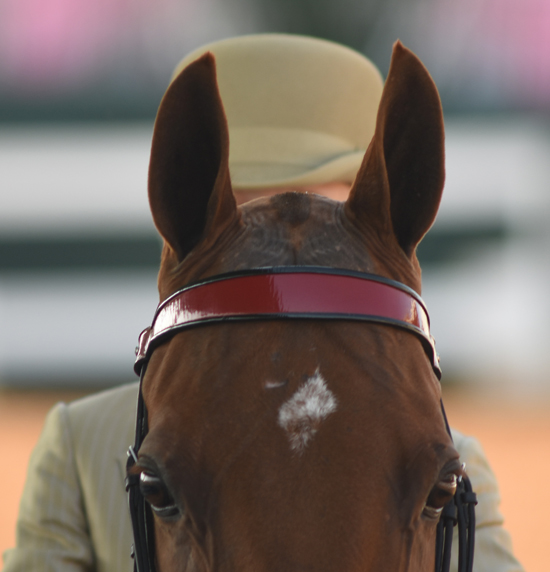 The Lexington Junior League Horse Show is an area tradition that draws people from all over the country. This year, The Red Mile was in the middle of getting a facelift with the front of the grandstand building and parking still under construction. The dedicated women of the Lexington Junior League made all possible accommodations, moving the horse show office and providing parking on the infield, to help the show run smoothly despite the construction.

They also had to accommodate the weather when the bright skies and warm temperatures early in the week turned to rain and storms by the weekend, postponing Friday night’s session until Saturday afternoon to have time to get the ring in shape again. This show is always known as a drought buster locally, but the amount of rain that came down in just one afternoon/evening was excessive along with the high winds. Some exhibitors who saw the ring early on Saturday scratched due to the footing, but just a few hours later, the ring was back in show shape and ready to go for the 3 p.m. and 7 p.m. sessions. Luckily, the bad weather on Friday afternoon came after the end of the last day session and spared Family Night on Thursday. Also, while the Friday night exhibitors party was cancelled, Siren Song Stables still went on with their barn party, welcoming all attendees.

While we love the show for the horses and competition, it shouldn’t be forgotten that the show is the Lexington Junior League’s biggest fundraiser, raising money for many meaningful local charities including the Alzheimer’s Association, Hospice of the Bluegrass, and the University of Kentucky’s Children’s Miracle Network to name just a few. By supporting this show, exhibitors and attendees provide much needed support for the local area as well.