When CH Honey Badger entered Freedom Hall Wednesday night at the World's Championship Horse Show, it was the first time his fans had seen him compete in over a year. It was a serious and even life threatening injury that had kept him from the show ring, so it was an emotional moment when he trotted and racked his way to the blue in the Five-Gaited Gelding Stake looking possibly better than ever, eliciting tears from his Matt Shiflet Stables family and his fans alike.

Here is everything you wanted to know about Honey Badger, or "Rocky," and his comeback.

Rocky is nine years old; his birthday is  2/17/2008. He is by CF First Night Out and out of Worthy's Even Then, by Roseridge Heir, and was bred by Blythewood Farms LLC. He is owned by Christina and Andrea Athanasuleas of Killen, Alabama.

He has an incredible show ring record. 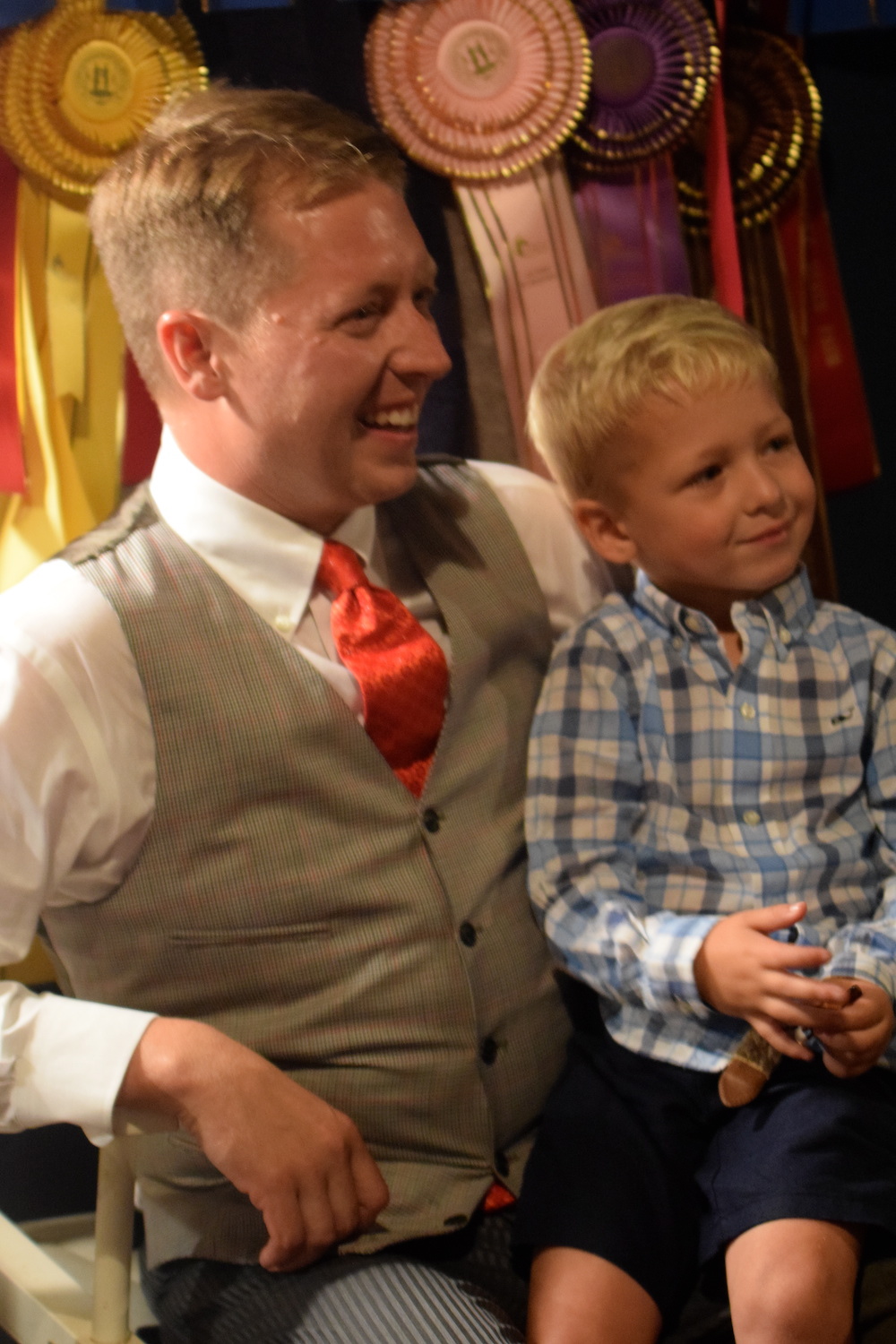 He has a fan club.

Young Riley Huff is known as the president of that fan club. Riley first saw Rocky at a show in 2013, and was immediately impressed by his athleticism.

"He's not your typical horse," he said. "If he was a person he would be an athlete -- one of those people that does four different sports."

The Shiflet crew has happily welcomed Riley into their barn, and he's even gotten to spend time with Rocky. He's also taken hundreds of pictures of him, and was excitedly showing them to Matt after the class.

"I've never had that before, and it's so fun," Matt said of Rocky's following. "Last year we gave hats out. This is an intense sport and an intense week for everybody ... it's hard to keep things in perspective, and it has to be fun. It's really enjoyable when you have a horse like that, and I don't think they come along very often in your lifetime as a horse trainer or owner."

Rocky was in the process of beginning another exciting show season, winning the Five-Gaited Stallion/Gelding Stake at Asheville Lions and Five-Gaited Gelding Stake at Lexington in 2016, when he was injured. Though at first it seemed manageable, by the time Louisville rolled around, it became clear that it was getting worse.

"It was really unexpected, and I don't really want to go into a lot of details about it," Matt said. "We got here last year and the injury became worse, and every day it got worse until it became life-threatening. Thanks to John Cummings sending him to the right place at the right time, we were able to bring him home."

It was an emotional time for those who love Rocky.

"We were all devastated and in tears," Matt said. "At first we were really sad because we weren't going to get to show him, and then it became nothing about showing, it became about the horse. We all agreed we would do whatever it took. We were scared and disappointed and worried; all those things. It was a tough time."

The jog cart was key to his recovery.

Rocky did travel to one show before Louisville, but he didn't show there.

"We took him to the Roanoke Shenandoah Valley show and worked him there and rode him as if I would show him," Matt said. "I needed to see where I was endurance-wise and bridle wise. After that, I knew I was on track to be where I wanted to be fitness-wise to come here."

Matt's goal for last night was simply to make it into the ring.

"I told my guys that it would be a win for us if he entered that ring tonight," Matt said. "That was our goal. And when we went in the ring, whatever happened after that was icing on the cake." 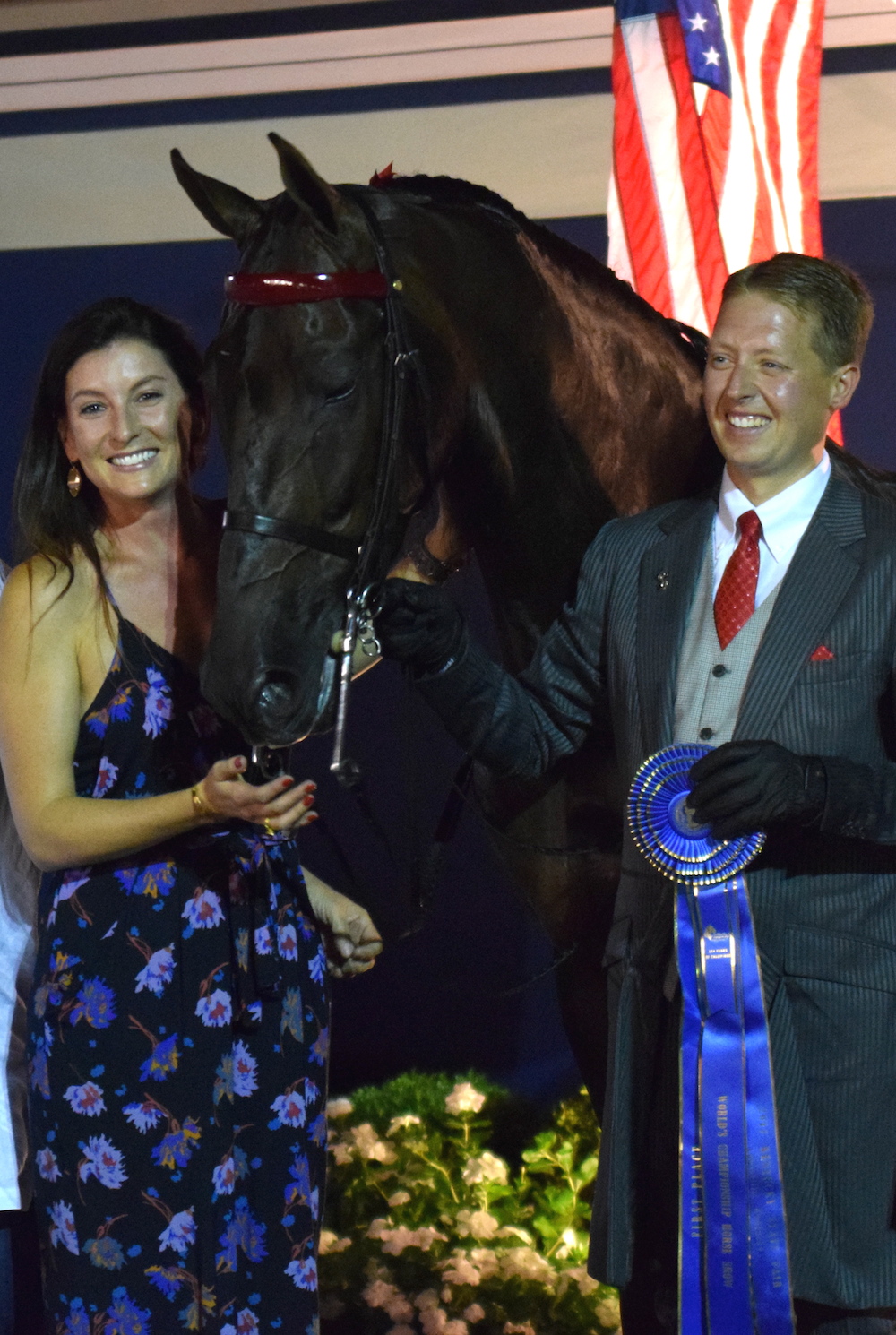 Rocky with Andrea and Matt.Matt was emotional even before Rocky's number was called for the win.

"In the line up I was honestly fighting back tears, because it all kind of hit me that we made it to the class and he showed great for me," Matt said. "I was just so proud of him. When they called our name, he's just always had a lot of people that cared about him and are here for him, and to see them all there for him was amazing."

Rocky and Matt have a very special relationship.

"As a trainer, in your career you'll have a few horses in your life that you create a bond with that are very special to you," Matt said. "They may not even be the best ones, but you just have a connection. I knew right away there was something special about him. He'll always be very special to me."

"Next is to try to get ready for Saturday night," Matt said. "Hopefully he'll stay in good order and we'll get people and the horse rested up between now and then. We'll just see when the gate opens if we're one of them that shows up."

Getting Rocky this far has been a team effort.

"We are just so thankful to be here and to compete at this level, and to have Rocky back in order," Matt said.

He believes that Rocky owes his recovery and comeback to many people, including his blacksmith, vets, caretaker Alonzo, owners Chris and Andrea Athanasuleas, his wife Whitney and son Clayton, as well as Rocky's many fans.

"Everybody that's ever cheered for him or called about him when he got hurt -- we really, really appreciate it, and they helped us make dreams come true," he said.