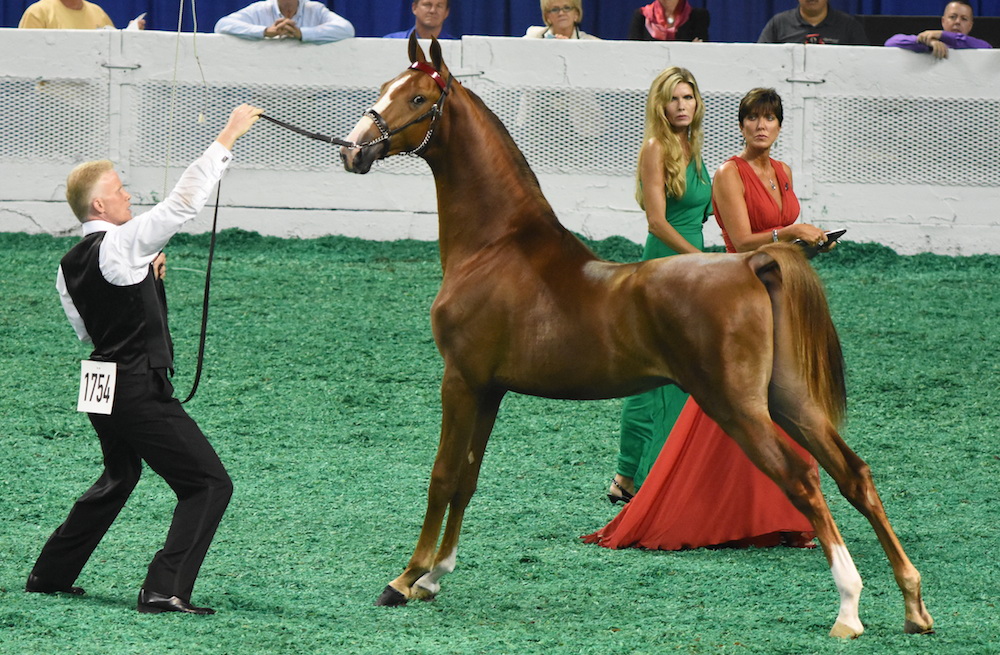 A name says a lot about an individual, and when it comes to Saddlebred show horses, it says even more. Not only is the chosen name expected to fit the horse’s looks and personality, it also needs to sound good when being called over loudspeakers all across the country.

Because of these expectations, coming up with the right name for a show horse can feel like a lot of pressure. But the experience of naming your horse should be exciting, not stressful. With a little knowledge and a bit of creativity, you can come up with a suitable barn name, as well as a name that looks good when someday written in lights.

The basics of naming

No one knows the naming process better than Lisa Duncan, Registrar at the American Saddlebred Registry, who oversees the daily operations of the registry. Her position encompasses everything from enforcing the rules of registration and transfer of ownership to collecting fees. 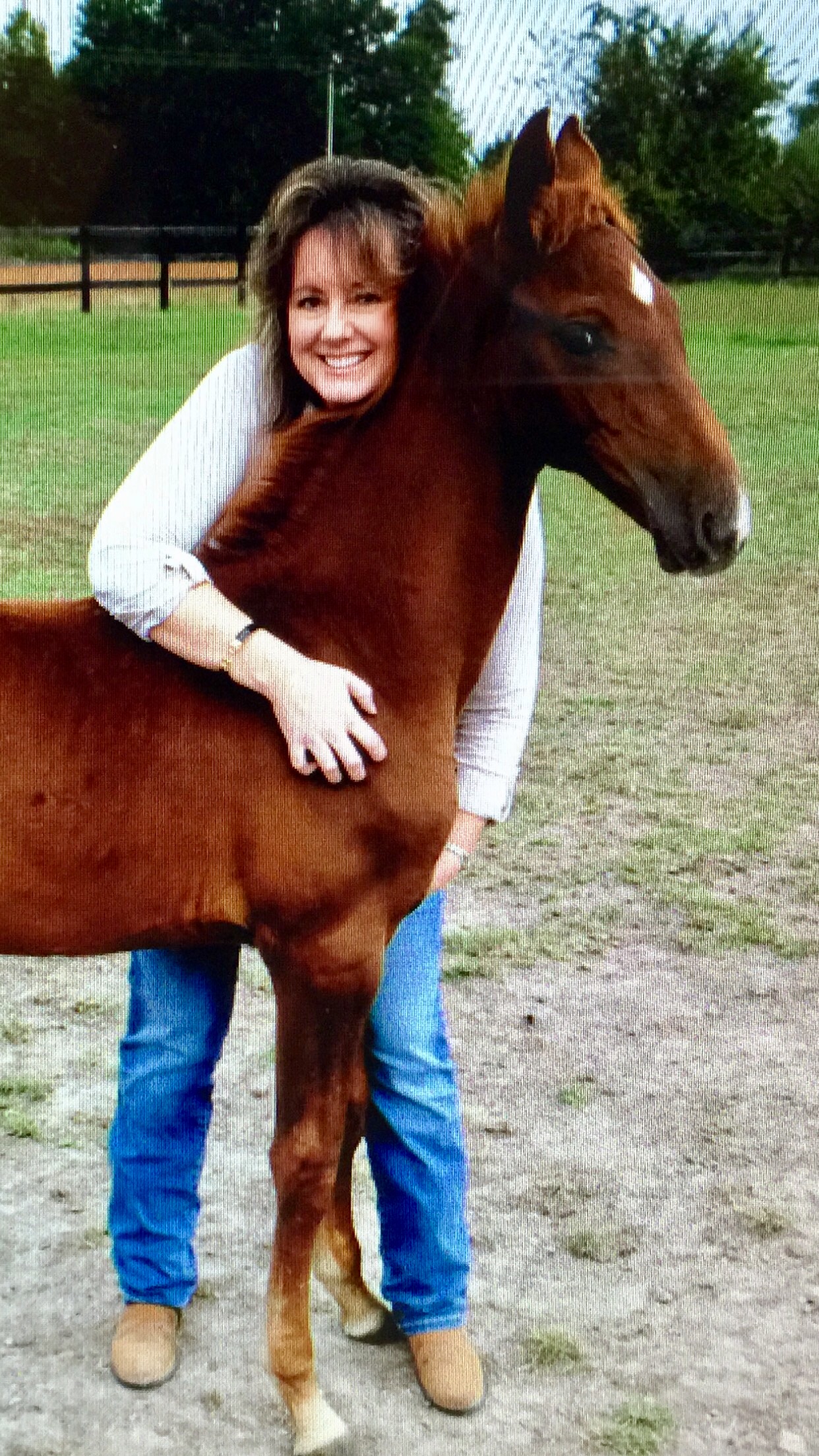 “Finding a name is so hard, because you want a special name, and you want something that people will remember, and you want it to fit the horse,” she said.

A good horse name can be inspired by almost anything. Horses are commonly named for different characteristics, whether personality, color or other physical attributes. Many owners name their horses after favorite fictional characters, and some (especially those who have a large number of foals to name each year) like to have a theme or process for the naming – all named with baseball terminology, or named in the same manner as hurricanes, following the alphabet.

According to Lisa, one of the most common naming methods involves the horse’s pedigree, pulling the name from the sire’s name, dam’s name, or both.

When it comes to registered names, Lisa prefers one-word names to long-winded ones, but admits that it’s really just a personal preference.

“I just feel like maybe it’s more memorable, and stands out,” she said. “When names get too long they’re harder to remember, so I think the shorter the better.”

One of her own foals is named Winslow, a name she arrived at by considering both his pedigree and pop culture. Winslow is by the stallion Desert’s Supreme Memories, who goes by the barn name Arizona.

“I’m a big Eagles fan, and the Eagles have a song that has the line, ‘standing on a corner in Winslow, Arizona,’” she said.

While Winslow’s name currently serves as both a registered name and a barn name, many horse owners are tasked with coming up with not one name, but two. When choosing a barn name, some simply pick a useable word from the registered name, and others spend hours scrolling through baby naming websites as if they were naming a child. The beauty of barn names is that there are no rules.

When it comes to registered names, however, there is a lot more to consider. If you name your horse after an obscure reference, will people understand it? If you use a long or complicated word, will anyone be able to pronounce it?

“If it’s going to be a show horse, a name that’s hard to pronounce may be a problem,” Lisa said.

And regardless, whatever name you choose will have to abide by the rules of the American Saddlebred Registry. 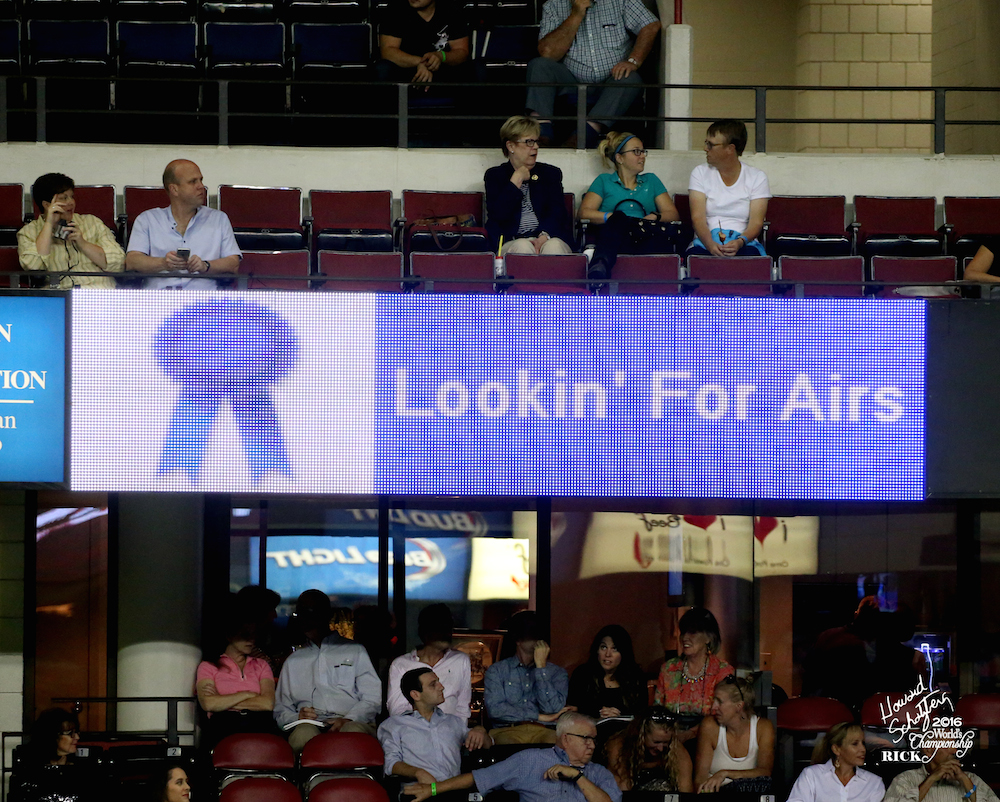 Horse names submitted to the American Saddlebred Registry must meet a few requirements. They cannot be longer than thirty-five characters, including letters, spaces and punctuation, and may not contain numerical prefixes or suffixes, Jr. and Sr. as suffixes, diacritical marks, or punctuation marks as prefixes.

Most importantly, they must not conflict with the name of any other registered horse, whether living or dead. The registry defines conflicting as “one which is judged to be too similar to an existing name either in spelling or pronunciation.” So, while the names Black Knight and Black Night are spelled differently, they are pronounced the same way, and so deemed too similar. In the same way, you can’t repurpose an existing name by adding or removing words like “A,” “An,” or “The,” or by adding initials as a prefix or suffix to the existing name.

“I think the most important thing is to be familiar with our naming rules, because I know a lot of people get disappointed when they send a name in and they’re really counting on getting that name and it’s already in use,” Lisa said.

For this reason, it is recommended that breeders provide three name choices when filling out the registration form. Though the registry still reserves the right to accept or reject any or all of the names submitted, Lisa said that most people get at least one of their top three name choices.

Anne Neil of Blythewood Farms LLC in Cleveland, Tennessee breeds anywhere from twenty to thirty foals a year, and registers all of them. While you can register a horse at any age, the ASR has a graduated fee schedule, and encourages people to register as soon as they can. The fee to register a foal from birth to six months is $45, and rises from there, so Anne tries to register hers by the fall of their foaling year.

“If I am really organized sometimes I can save a little money, because the fee goes up the older they are,” she said.

While Anne doesn’t have a specific system for naming her foals, like many breeders, she tries to give credit to the stallion whenever possible. For example, all of her current stallions are by the great sire CF First Night Out – WC At Night, CF Rare Night Out and First Watch – so she chooses to continue paying homage to that lineage in their foals with names like At Your Best, Busting Out, Emmy Night, At School, or It’s At Night. However, she strives to be more creative than simply combining the sire and dam’s names to form a new one.

“It’s not very original in my honest opinion,” she said of that method. 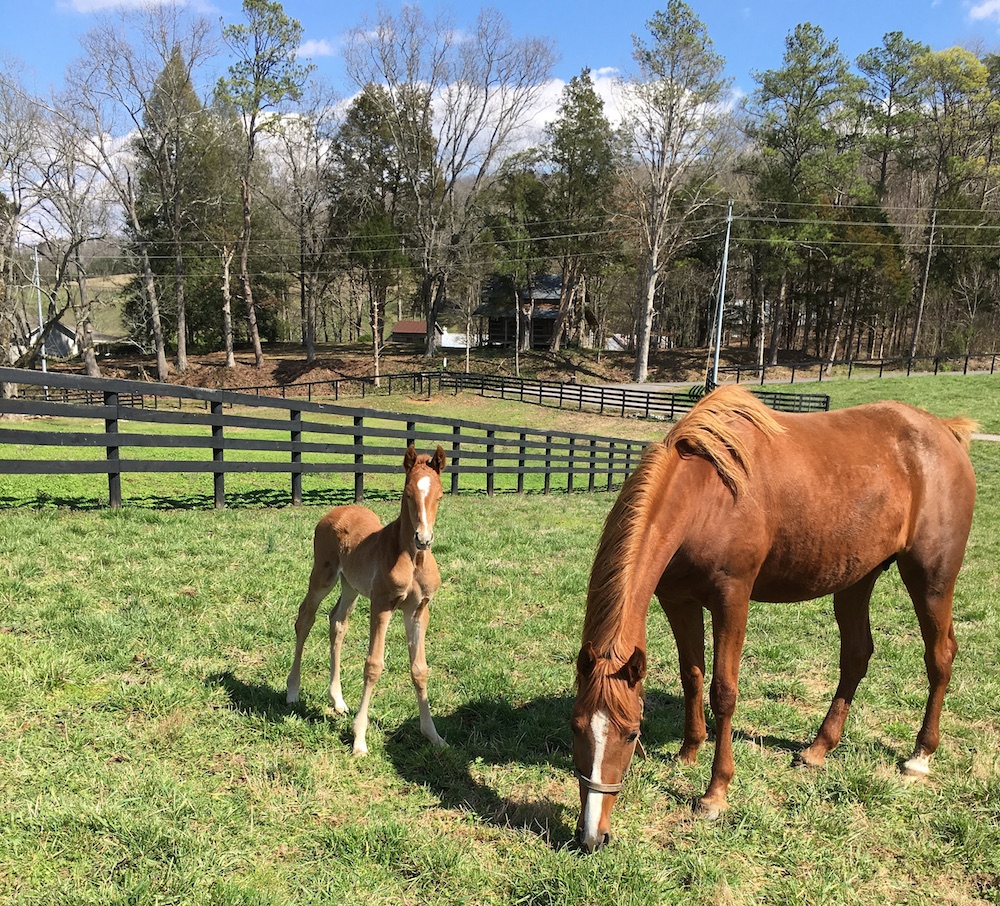 But, at the same time, Anne recognizes the challenges of the naming process.

For those wanting to check on the availability of a certain name, the American Saddlebred Horse Association website offers a horse name search that can be extremely useful. ASHA members need only select “Registry” and then “Horse Search,” and enter the desired name to check if it is in use.

However, while the Horse Search is a useful preliminary tool, it should not be taken as verification of availability. There are a number of reasons why the name may not show up in the search, but may still not be available for use. For example, the aforementioned name “Black Night” may look available on the website, but would be rejected by the ASR because there is already a horse registered with the name Black Knight, which may be spelled differently but is phonetically the same.

“It’s a good place to start,” Lisa said of the Horse Search. “Then if they think the name is available after checking the website, they may want to give us a call or send us an email and we’ll just double-check it for them.”

However, even if the ASR confirms the availability of a desired name, they will not guarantee that it will still be available by the time you want to use it. That is, unless you fill out an application for name reservation.

Name reservation is one of the little-known tricks of the ASR, and it can be especially useful for someone who intends to breed their horse in the near future, has already chosen the perfect name, and wants to make sure they won’t lose it before they are able to register the foal.

There is a $50 fee associated with the application, but once filled out, the application reserves the desired name for a full year, and can be renewed each year as needed. 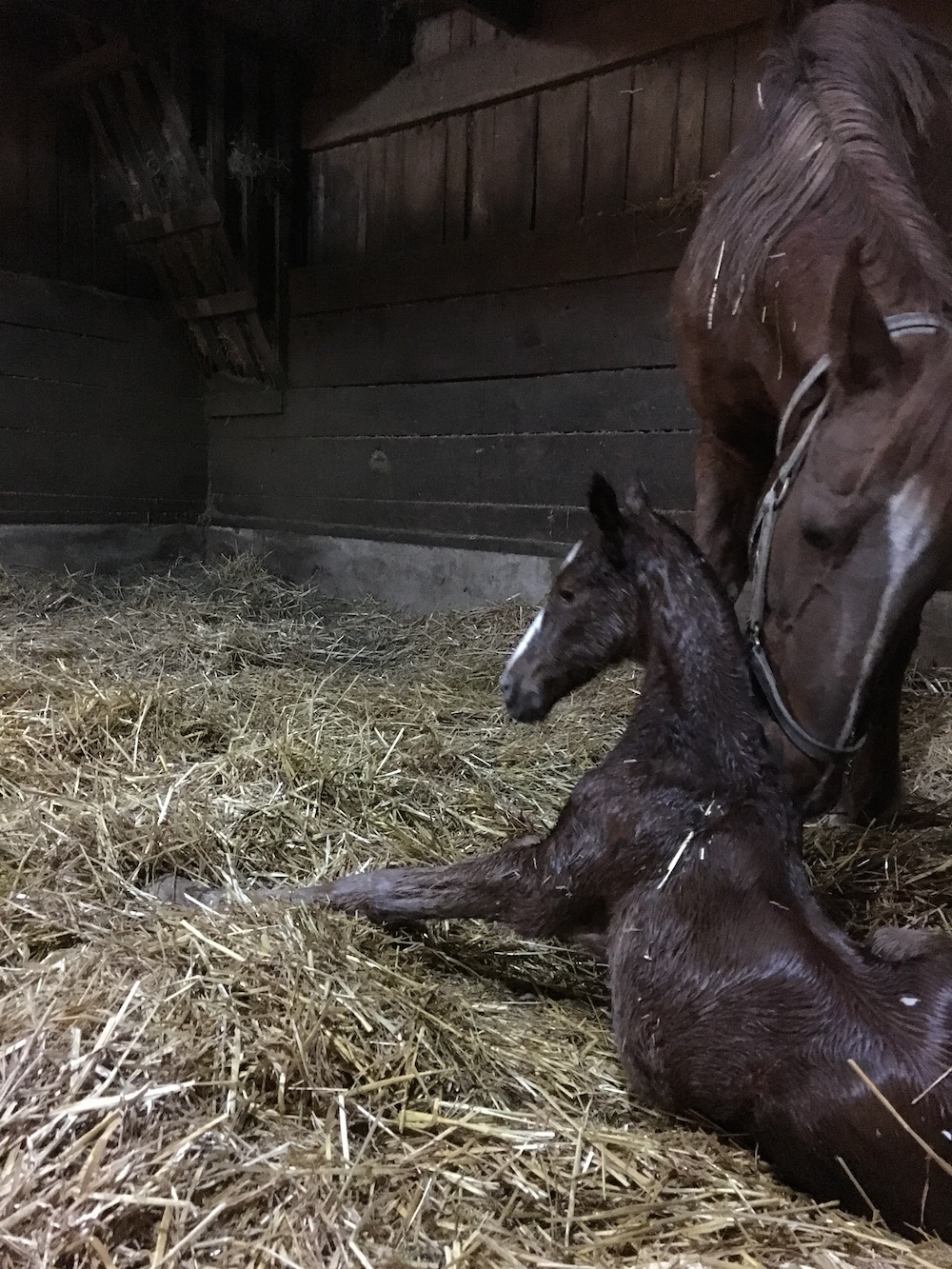 For those with the opposite problem – having a foal before they’ve chosen a name – another little-known rule allows owners to pay the regular registration fees and get the foal registered even without a name.

“We have a new naming rule that has gone into effect where people can send in their application for registration, and if we have everything we need, all the requirements are satisfied and the only thing lacking is the name, we’ll give the foal a registration number,” Lisa said.

The owner then has until February 1 of the horse’s two-year-old year to claim a name for just $25, before the fee rises to $250.

Another rule of interest is the rule regarding registered farm names. For a fee of a thousand dollars, the ASR allows farm owners to register their farm name or farm name prefix to guarantee exclusive naming rights with that name.

“The ASR has a rule that no one can use a farm name prefix without written permission from the farm owner, which I think is very appropriate,” Anne said.

Though the horse’s name can be changed, the registered farm name cannot be removed without permission from the farm owner, either.

Anne doesn’t usually use her farm name when naming horses, but after learning that it is not uncommon for farm names to be used by people other than the farm owner, she recently reserved the prefix “Blythewood” just in case. However, she thinks it should be common courtesy for someone to get permission from the farm owner before using a farm name prefix, regardless of whether that name is reserved or not.

“I would not appreciate someone else using it,” she said.

This courtesy, along with knowledge of the rules, and a little creativity all play a role in picking the perfect name for a show horse. If the process still feels too stressful just remember that names may be important, but there is something even more important – the horse itself.