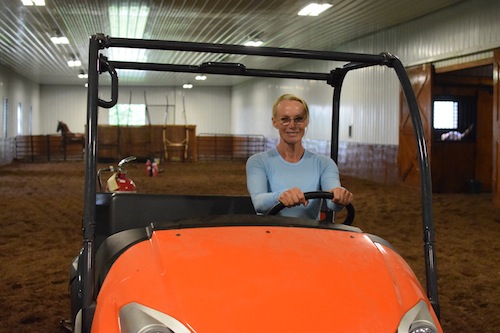 When I arrived at Visser Stables that Wednesday afternoon to meet Elisabeth Goth, I was surprised to find her at the wheel of an orange Kubota RTV 500, dragging the indoor. I’m not sure where I expected her to be – socializing with other customers on the sidelines? Giving orders from the doorway? – but this wasn’t even close to what I had envisioned.

She stepped out to let me aboard, and when she did, I saw that she was wearing three-quarter length workout pants. I climbed, mystified, across the seat, settling next to someone’s cell phone and an empty coffee mug, and discovered it felt surprisingly natural to be bouncing along in a Kubota beside a woman I’d watched from afar since childhood. But that’s Elisabeth; she has no interest in putting on airs. Every ounce of her energy is focused on one solitary goal – being the best horsewoman she possibly can, and doing it all with class. 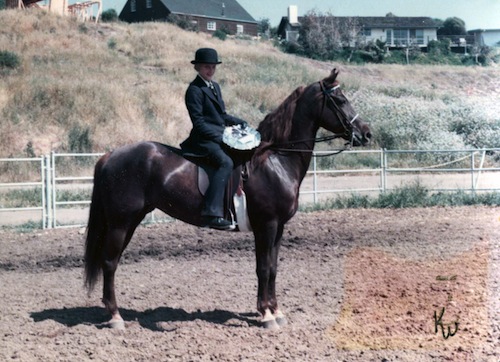 “Wednesday is my barn day,” she said, as we circled the ring. “I get so excited for it. The happiest I ever am is Wednesday when I'm here all day.”

She was wearing workout clothes, she explained, because she had just finished working out in the barn’s lounge. During show season she works out with her trainer four to five days a week, in addition to riding three to four times a week; being in shape helps her feel much tougher mentally.

“I was going to have you work out with me if you got here in time,” she told me.

As we circled the ring at a steady pace, the flow of our conversation was interrupted once or twice by an apologetic Elisabeth, asking me if I would mind opening the round pen gate or securing an errant piece of paper that had gotten mixed into the arena footing – tasks that made me feel even more at home. I had grown up at the barn doing these things, and, as it turned out, so had Elisabeth. 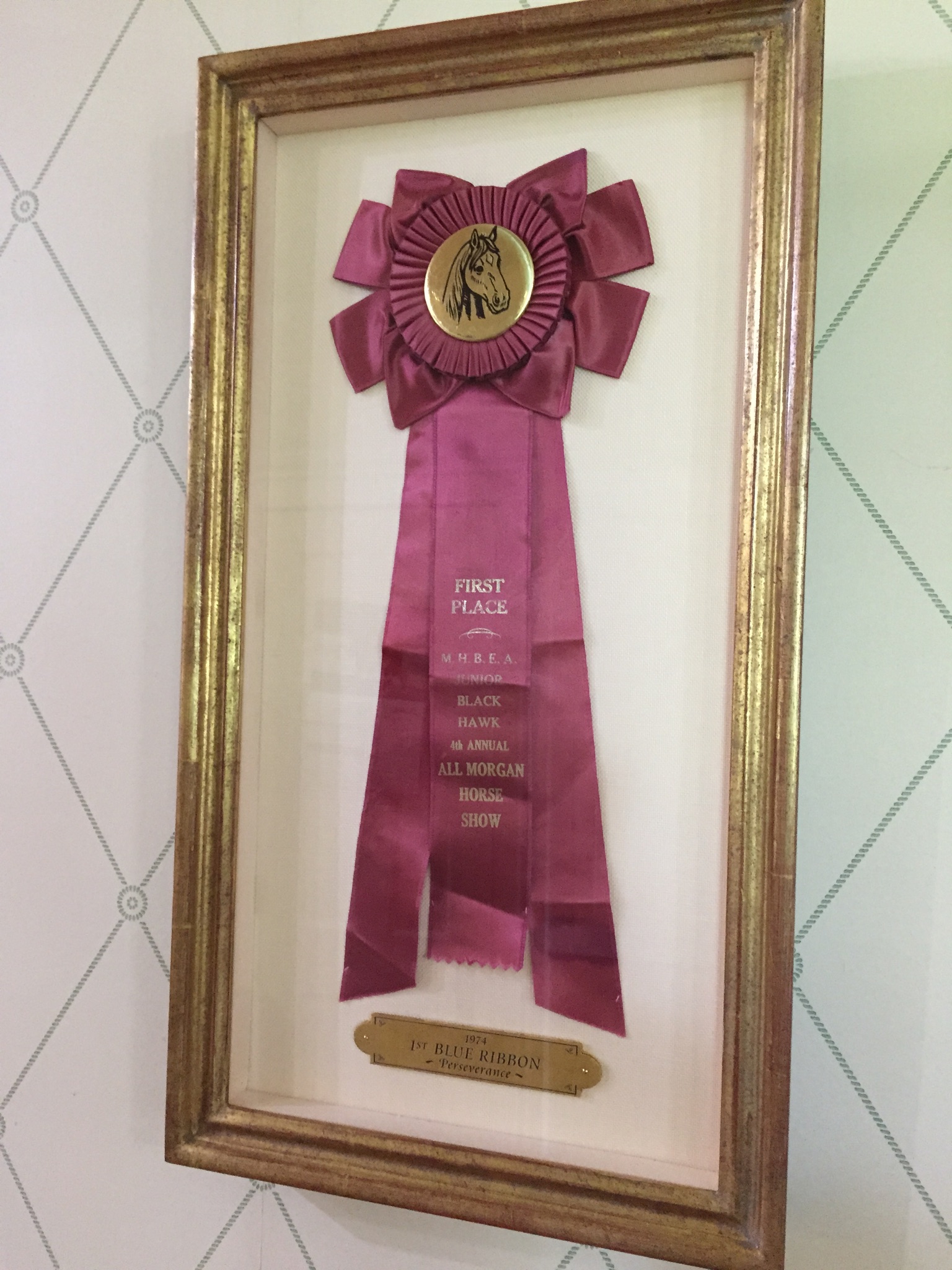 With grandparents who had hunters and jumpers, a great aunt who had Saddlebreds and another who had Hackney horses and ponies, she was born into a horse-loving family. She began taking riding lessons with Bill Gobie in Rancho Santa Fe, California, at the age of four, and began riding at Bobbin Hollow Equestrian Center, then based in Amherst, Massachusetts, when she was seven.

“I would clean stalls and clean tack to get extra lessons,” Elisabeth said.

Bobbin Hollow offered a riding camp for riders nine years and older. However, Elisabeth was allowed to attend at age seven, since she was a constant face at the barn anyway.

“They thought, ‘if she starts crying her parents can come get her,’” Elisabeth said.

It was a three-week camp, and there was no crying. Elisabeth stayed the entire time, riding the old school horses and watching in awe as the Saddlebred and Morgan show horses were worked.

By the time she was ten or eleven, she had her own horse on which to compete, a Morgan named Waer’s Miss Marcie. She would load up the trailer and enter every class for which her horse was eligible, and it was for this determination that she received her very first blue ribbon.

“The judge came on the microphone and said, ‘Sometimes you just have to reward perseverance,’” Elisabeth said.

The faded blue ribbon, now more purple than blue, hangs in a frame in her kitchen, as she still carries that lesson with her today.

“Every time I've had a failure it’s ended up helping me,” she said. “When I was defeated with Hollywood Excellence we came back and won the Stake. When I was excused with Bravo Blue we went on to win Louisville that next year. I let my failures be my inspiration rather than letting them mentally defeat me.” 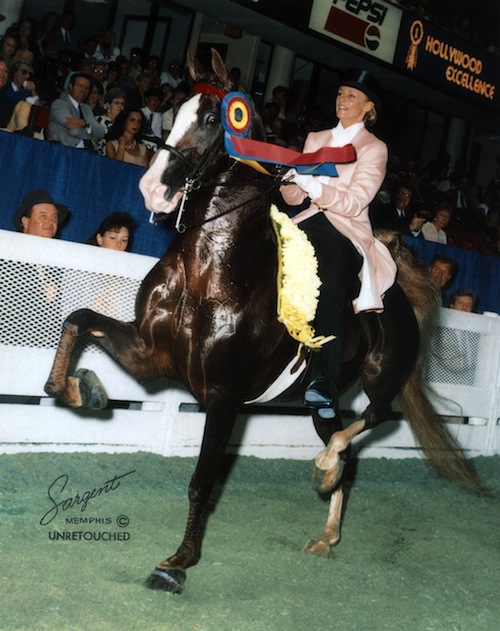 This determination has served her well in all her equestrian endeavors.

“I’m still in the horse business because I still want to learn, and they teach me every day,” she said.

There is nothing Elisabeth enjoys more than furthering her knowledge about horsemanship, health, shoeing, bitting, or breeding, and she likes to do that learning up close. She prefers direct involvement, whether that means rubbing on her horses after a ride, dragging the arena, serving as ground person for trainer Neil Visser, or working closely with the vets and farriers.

“It’s definitely not a very typical situation,” she admitted.

This level of involvement was apparent once again when Elisabeth paused our lap around the arena at the arrival of her breeding manager Donnie Pyburn. Her breeding program is currently situated just down the road from the Visser Stables training barn in Versailles, Kentucky, and, through the years, it has turned out horses such as CH Signify, CH So Fortunate, CH Hollywood Agent, CH Mega Star, Drosselmeyer, CH Glinda The Good and many more. She spent ten minutes discussing plans with Pyburn, and then we were off again.

Multitasking is typical of Elisabeth’s day, because she is involved in so much. In addition to her breeding operation, she supports the horse industry as a sponsor and organizer of various programs, but also serves it as Vice President of the United States Equestrian Federation and co-chair of the Mileage Rule Revision Task Force, which deals with USEF’s licensing of competitions. Though the committee work has been time consuming – an average of 10-25 hours a week – Elisabeth feels the work is worth it.

“I like the idea of governance in general,” she said. 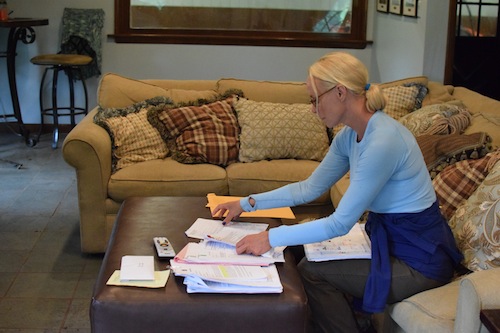 “It helps every aspect of every business and sport if it’s done properly. But there is definitely an art to it, especially in the horse business. You have to build consensus.”

Yet, with all this outside work, she never loses sight of her main purpose.

“It’s not really my goal to be Vice President of USEF,” she said. “It's my goal to be a great rider. I really don't care if I get re-elected, and I think that's going to make the difference. I'm going to speak the truth and not be protecting my title.”

If you ask Elisabeth about any of these high principles by which she lives – integrity, kindness, sportsmanship – she’ll tell you it’s just the way she was taught, first from her mother, Bettina Bancroft. 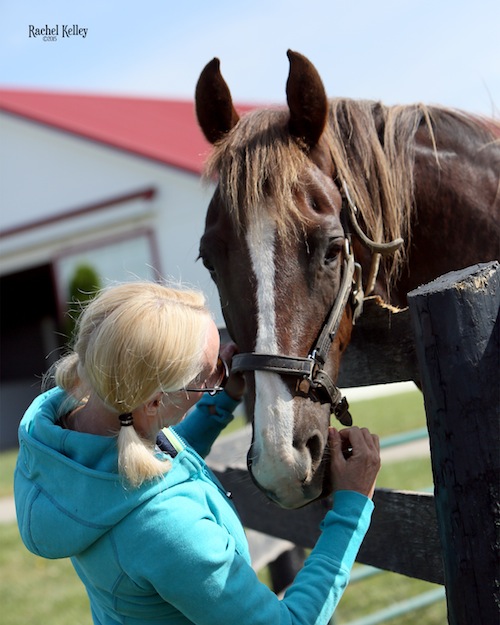 “It's important to me to behave that way,” she said. “I'll never forget one time I showed Hollywood Excellence at New York National. We suffered a rare defeat and I didn't really want to go to the dinner party that night. This was after Mom had passed away. Michele Macfarlane said, ‘You're going to that dinner!’ After my mom passed away she kind of helped reinforce that.”

Elisabeth is also a surprisingly frank person, just as apt to talk about her struggles as her successes. The sensational five-gaited World’s Grand Champion CH Bravo Blue has been both for her. It was a lifelong goal to ride and successfully show a horse that powerful, and the road to get there was not easy, but in 2014 her dream came true when the pair won their first class at Midwest Charity. Later that year they went on to win to the Ladies Five-Gaited Gelding World’s Championship as well as the Five-Gaited Reserve World’s Grand Championship honors. She is still working hard, and she had a fantastic ride on him that very afternoon.

“If I share my struggles, I might help someone else,” she said. “There is nothing sweeter than overcoming adversity for your insides! A great horse and a trainer you work well with will teach you more about gratitude and life than just about anything else.”

Elisabeth has had a number of great horses and ponies through the years, and she has trainers she works well with, too, in Rich and Maureen Campbell and Neil Visser. Neil has been working horses for her for 18 years, and he has seen Elisabeth’s drive and ambition up close. 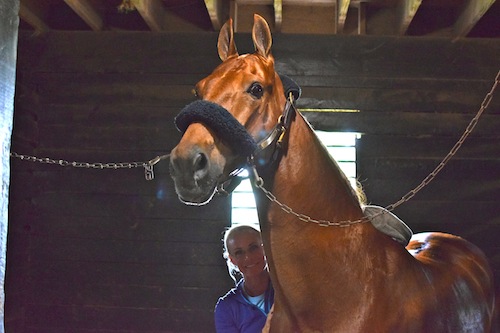 “Maybe we’re both a little bit crazy,” he said. “For the kind of horses she wants to show and the kind of classes she wants to win you need a pretty high-powered horse to accomplish that goal. Like the Bravo Blue thing, sometimes it takes a while to get that done.”

However, Neil has noticed that all Elisabeth seems to need is one good experience with a horse in the show ring, and things seem to fall into place.

“With high-powered horses, the big hurdle to overcome is to have that one good ride,” he said. “She is an extremely talented show person. Once she trusts the horse, she can show a horse as good as anybody. She's very good at putting the horse in the right place in the ring in order for them to shine.”

He feels fortunate that Elisabeth provides him with the right kind of horses, vets and farriers in order to get the job done, and he appreciates her involvement in the daily lives of her horses.

“It’s not that she wants to tell you what to do or anything, it’s just that she cares that much,” Neil said of her interest in their training, vetting and shoeing. “She knows more than the assistants sometimes.” 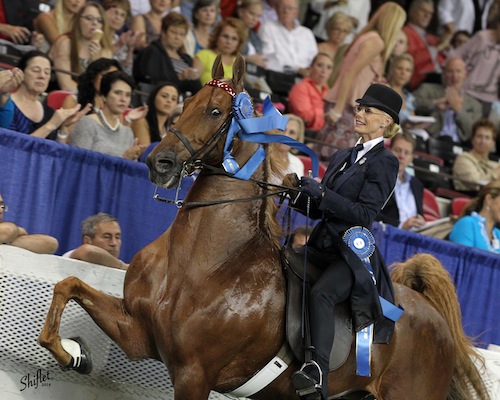 But, perhaps what he appreciates the most about Elisabeth is that they have the same goals.

“We are trying to create something that's a little bit different than the norm, something that just takes your breath away,” Neil said. “And she’s had some performances like that already.”

“Great performances like that are so much more meaningful than just winning a blue ribbon,” she said.

In the pursuit of this elusive breathtaking performance, Elisabeth has picked up a very important skill – the ability to ride a horse right to the edge.

“I think when some people get on a horse that starts to do that their immediate reaction is to try and shut it down,” she said. “I've become very comfortable in that place where it's free and wild and at any moment it could all just explode.” 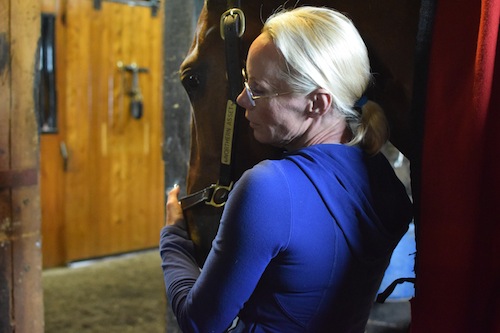 If you ask Elisabeth who her all-time favorite horse was, you’ll get a list, some more famous than others: CH Hollywood Excellence (BHF), CH Bravo Blue,  Fort Chiswell’s Royal Kiss,  CH Thunder Country and  Buck Be A Lady, as well as two of her up and coming younger horses, Carson Nation and Northern Asset. But even narrowing it down that far is difficult, as she loves them all.

This love is never more apparent than during her end-of-the-day ritual when she journeys through the barn, visiting individually with each and every horse. The horses appear to look forward to this one-on-one time as much as she does, and when you bear witness to their nuzzles and loving eyes, it’s easy to believe it’s for more than the treats.

“Ready?” she asks, arms loaded with apples and carrots.

As soon as she steps into the aisle, the whole barn starts nickering.