I don’t like Apple very much right now. I don’t even have anything witty to say about that. Remember how I said that I would do anything for that horse? Well apparently the feeling is not mutual. I may love her, but I really don’t like her at this particular juncture in time. “Why, Ashlea? Oh, why are you so dismayed?” you ask. Don’t worry I’ll tell you, and how. 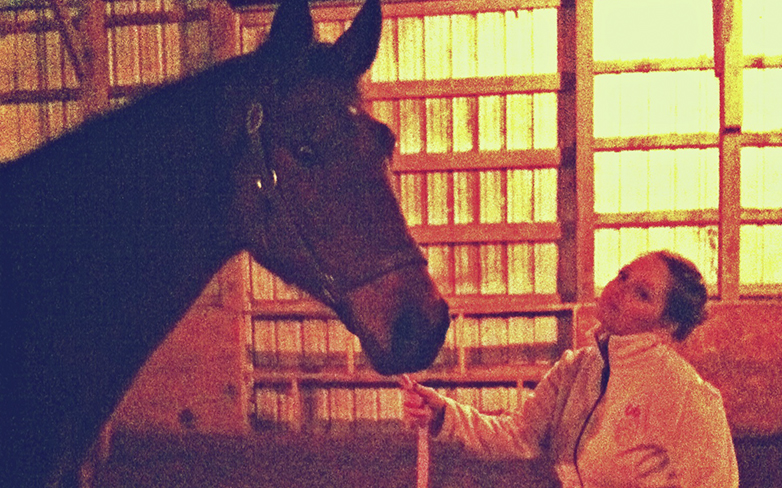 It’s been a really long day. I won’t go into details, but as far as winning goes, let’s just say I didn’t. We decided it had been a day or two since we had gone to see Apple and that we should probably go do that, so off we went. We arrive and begin to groom her, and it was made abundantly clear from the get-go that she was in a rough mood. This isn’t too off-putting since her ground manners don’t always dictate how her work manners will be, so we continued on. We decided whilst we were grooming that we would lunge her over long-lining today, as we were tired and it was quite chilly, and that I would be doing the honors this evening. I had done it a few times before with no major issue, so we figured it would be short and painless. We had agreed earlier that it would be a quick work out today, so I even wore my street boots to the barn. One should surmise that sort of decision usually leads to trouble…

I hooked her up to the line and off we trod to the ring. We started off decently enough, with an even trot counter-clockwise with no fuss. After a few minutes working like that, I wanted to bump her up to a canter. So I clucked, voiced the command and cracked the whip. Nothing. I repeated this process. Nothing. Actually one could make the argument that the word “nothing” wouldn’t quite cut it and that “less that nothing” would be more appropriate. She instead shifted into a mutated trot/walk/ amble that a Shetland pony would balk at.

“You give up too easily,” comes the voice of reason from the door way. “No kidding,” I reply. “Okay, let’s try this again, shall we?” Again I cluck, voice the command and crack the whip. Still trotting. “That’s not cantering. That’s a trot. Which is lovely, but still not a canter.” Rinse and repeat on both our accounts a few more times until I begin to jump up and down in place, flailing my arms. I am wracking my brain to figure out just what I am doing wrong. I hear raucous laughter from the door way. I look over and my roommate is just having a ball over there. My face flushes and I feel even more like a complete nincompoop. She stops laughing just enough to tell me that I have to keep doing it consecutively until I get what I want. So I recollect myself and try it again. Cluck cluck cluck, “canter” and whippy whippy. What did I ever do to this horse to warrant this? In all actuality, had I not been so tired, this likely wouldn’t have been so dramatically disheartening.

“Apple, pleeeaasssseee!” I begged. “Just a little canter! The sooner you do this, the sooner we leave you alone.” My roomie is laughing hysterically at this point, but clearly she can see frustration and deep, deep depression seeping into my face. She offers to help, which I politely and defiantly refuse. She then offers advice, “You’ve got to use your energy to convey to her that you fully intend for her to do what you want and you won’t leave her alone ’til she does.” Energy … right. Clearly full of that. So I take a few deep breaths, ground myself and cluck. “Canter,” I commanded. There is was! It was a sight for sore eyes and I could have cried right then and there. I let out a sigh of relief and quickly had to snap back to reality to keep her in correct canter lead, which I managed for a few passes before I slowed her back down. I was beaming with pride and giddy at the thought of dinner and my pajamas. “Okay, reverse direction,” my friend directed. You have got to be kidding me. It took an Olympian effort just to get that. I grabbed hold of Apple’s halter and went to send her out into the reverse direction to start her trot, but what actually happened was just the two of us bumbling about in ring-around-the rosie. Nailed it. I tried time and time again to get her to start off, but to no avail, only to be informed that she often dislikes this direction. Golly, who would have guessed.

Every time I tried to send her out, she would follow behind me like a puppy. Usually this would be cute, but Apple doesn’t do cute, she was being a twit. I sent her out once more, moved to the side and flicked the whip. “Trot!” She turns toward me and amps up for the trot. “Not at me, Apple!” Clearly this was not my finest hour and words were had I’d rather not repeat. I decided to try a different approach … any approach, really. I tugged and tugged, clucking away like an old farm chicken. Let’s be honest, I know better than to tug on a horse, especially one that has no intention of going anywhere. But there I was tugging on this horse like it was going to magically make a difference. “Why are you so heavy?!” Like I said, not my finest hour.

The abridged version of this bit of the story involves 15 minutes of various tugging techniques. I finally abandoned my tugging efforts and adopted an even more hopeless approach: bargaining. I am beyond pretending I didn’t do this and that I would never stoop to that level. I grabbed that horse by the halter and I did everything I could to strike a deal. “I think we can both agree this is going nowhere, mostly for me. I would like to stop looking like a ninny and get home to my dinner and comfy bed, and you would like me to leave just as badly. So I will offer you not one, but two, TWO treats. Just work with me here.” My roommate came over laughing and took the rope and whip from my limp fists and decided to finish this little lesson so we could get home. Apple gave her the same attitude and work ethic that she gave me, which was a boat load and zilch, respectively. Finally she just put on her game face and made that pony run. (We put her up to cool, and my roommate asked me if seeing her have difficulty made me feel any better. I told her not in the least, and she proceeded to tell me all the stories of times she had troubles and hit roadblocks in her training. I pointed out how she was still super awesome stellar and I was a doofus.)