As a journalist, I'm trained to not have favorites. In fact, during college and graduate school, my classmates and I studied and debated topics of journalist ethics and integrity constantly. I graduated in 2011 with a strong belief in the need for impartiality, and a determination to bring that level of professionalism and objectivity to the show horse industry. 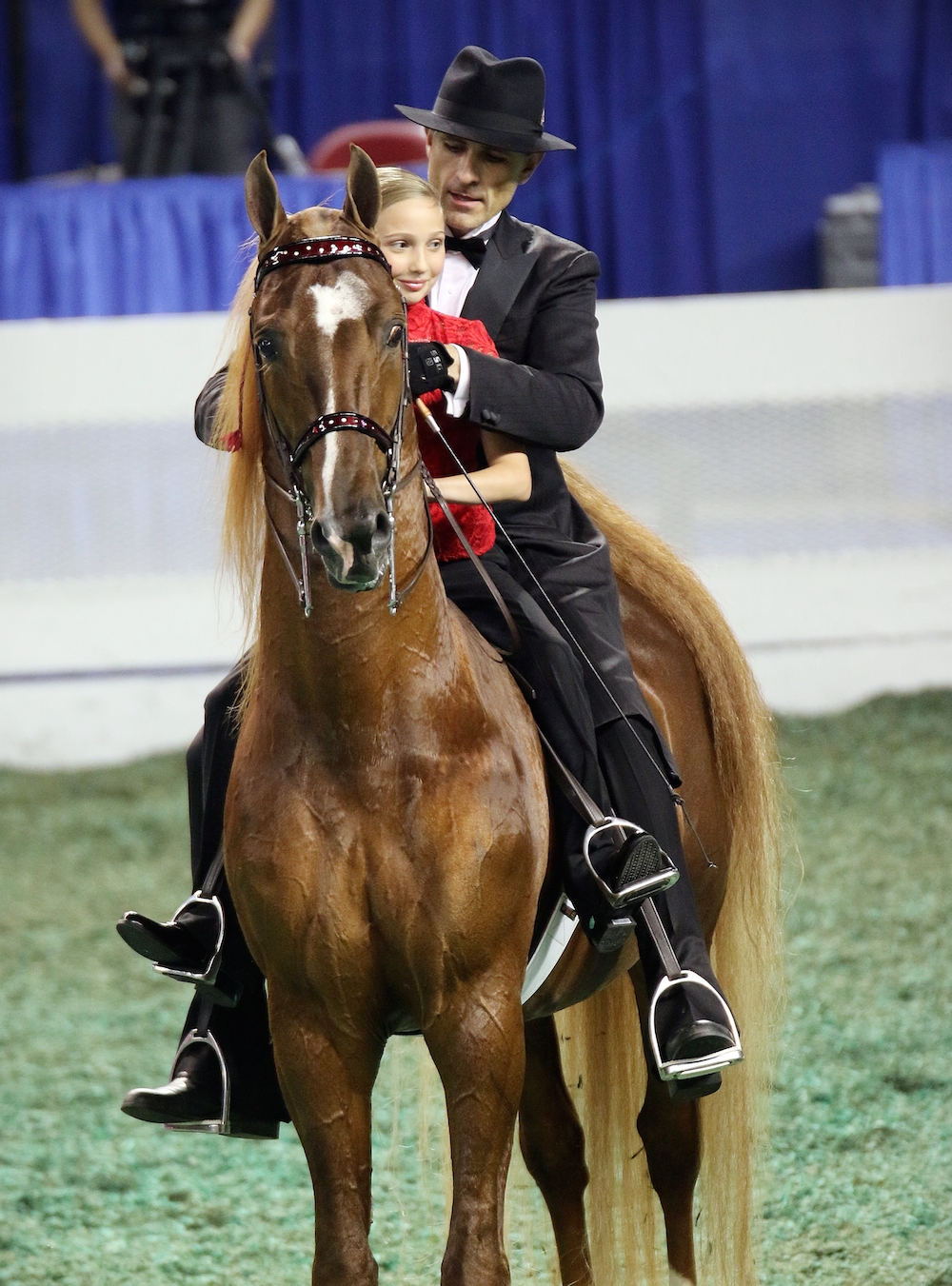 Marc during his retirement ceremony on Friday night of the World's Championship Horse Show, with Lionel and young fan Ella Herrin. Photo by Julia Shelburne-Hitti.I was excited. I was certain. I was ready. And then I met Marc Of Charm, the horse who ruined it all.

I had heard of Marc before, but I think my love affair with him really started during the very first horse show I covered as an editor for Saddle & Bridle. It was Midwest Charity, and it was Marc's first year in the open ranks, but I didn't know that as I wandered the barn aisles. Though I have been involved in the Saddlebred industry my entire life, I grew up in the Northeast and knew few people on the Kentucky and Midwest circuit, so I didn't really recognize the man who gave me a friendly hello from where he sat in his director's chair, dog at his side. He asked me about myself; I asked about the dog and learned that his name was Porridge. The man, of course, was Lionel Ferreira, Marc's trainer, and though he probably didn't realize it, he had just given me a very great gift – during that time of transition and uncertainty, he made me feel welcome. 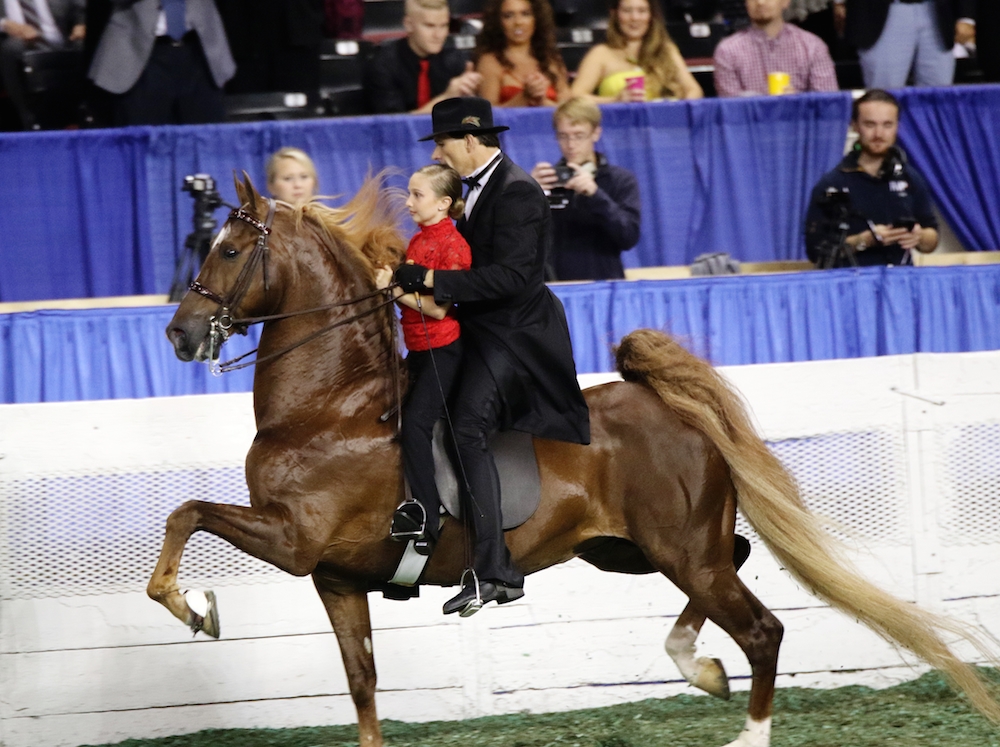 Marc gave young fan Ella Herrin the ride of a lifetime. Photo by Julia Shelburne-Hitti.Those wins will always be a part of Marc's legacy, but I happen to believe that his legacy will reach far beyond that, too, because it was never just Marc's talent that enchanted me. Back in the Monnington barn aisle Lionel and owner Carolyn Koch let me pet him, feed him peppermints, take a picture with him. It made me feel special, but it wasn't because I was special, or even because I was media. They did that for everyone, because that is who they are, and more importantly, that is who Marc is.

This was never more apparent to me than on two occasions. The first time was 2014, the year Marc did not make the workout in the Five-Gaited World's Grand Championship, and all his connections trudged back to the barn with heavy hearts. I found Lionel, deflated, hot-walking him in the aisle, and I wasn't sure if I should bother him on such a disappointing occasion, but I decided he might appreciate my interest, so I asked if I could get a picture with the two of them. As usual, he obliged, and when we were finished another person stepped forward and made the same request. My question seemed to have given courage to all those standing on the sidelines watching and hoping to interact with the great stud, because this person was followed by another, and then another, and then a line began to form. People loved Marc, whether or not he was wearing roses, and I suspect that was either the moment Lionel realized it, or at least the moment that solidified something he already knew. I know it was for me. 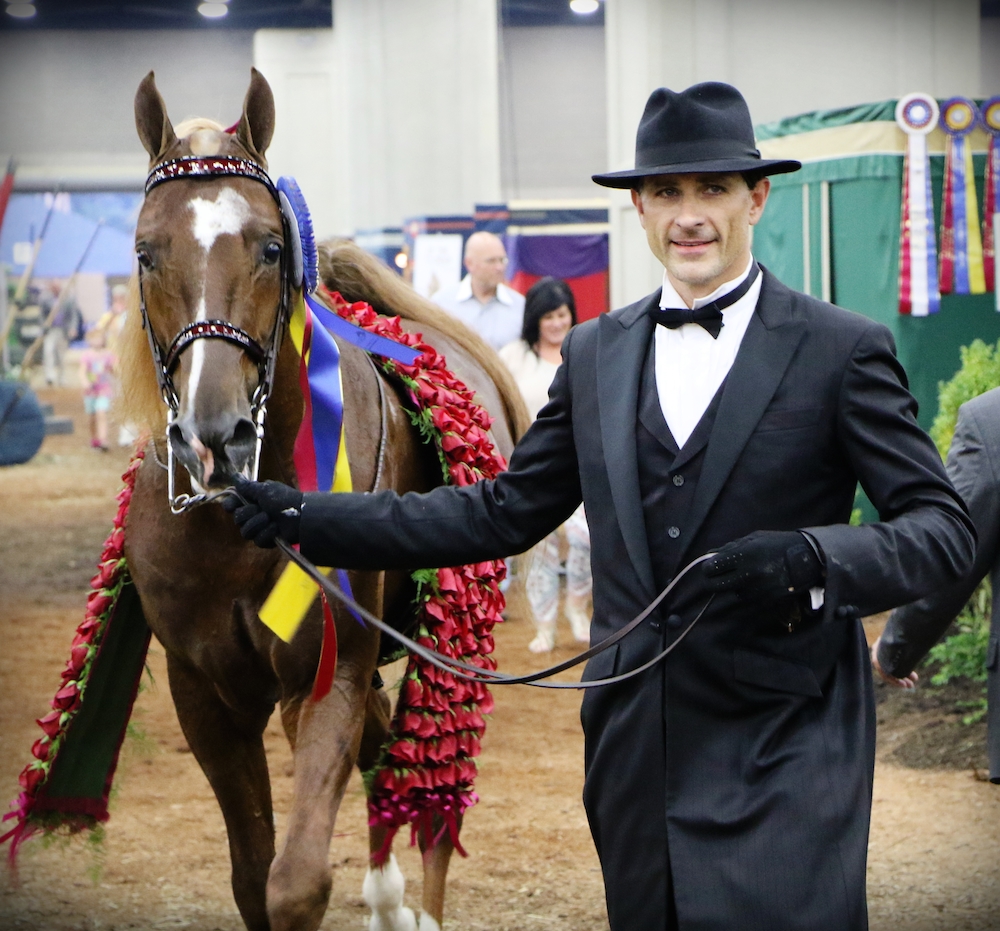 Marc and Lionel after the retirement ceremony. Photo by Julia Shelburne-Hitti.The second occasion took place after his World's Grand Championship win last year, as I watched Marc stand quietly in that very same aisle and allow himself to be swarmed by people from all sides, people that wanted to see him and touch him and congratulate him. Most trainers would keep the crowd back; they would have to, because most horses wouldn't stand that calmly for that long, but Marc did, as Lionel knew he would, and that is why it seems entirely fitting that he became known as The People's Horse.

From the junior exhibitors he performed for and entertained at Lexington this year, to Ella Herrin, the lucky young lady who got to take a spin on him during his retirement ceremony at the World's Championships last night, Marc has never been held back from the public that wanted to see him, and the public has never been held back from him. They were there to root for him when he lost and cheer him when he finally won, and they were there during his final appearance in Freedom Hall to bid farewell to an outstanding example of everything that is right with our breed, and a horse that we are all lucky enough to have been given a little part of.

As he goes on to his breeding career, there is much to reflect on. I know what he inspired in me: a sense of possibility, and of hope and of enduring love for a breed of horse that never stops giving. I don't normally like to speak for anyone but myself, but judging from the smiles on the faces of those in the crowd last night, I think in this case I probably can.

And, with apologies to my journalism training, I can never be impartial about that.