It was after midnight and the horses were restless, unaccustomed to human company at that hour. The fans were going full blast, the barn door at the end of the aisle cracked open, light spilling onto the grass outside. 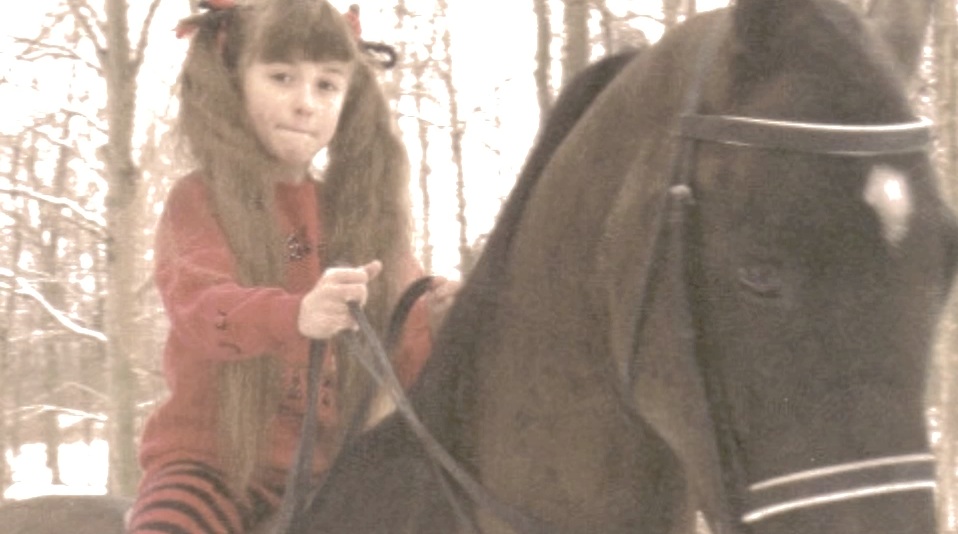 Katy and Beauty when they were both very young.One of the horses whinnied; another walked a circle and stood, ears pricked, eyes locked on something I couldn't see as the rain began to fall. Were they just excited about the possibility of getting more night hay? Or did they know, too, that the day that had now rolled fearlessly into June 1 was a special one – the day my big brother was coming home?

I wouldn't make a four-hour round trip for just anyone at that time of night, especially with the prospect of work the next morning, but I would for him, because he had always been there for me. Before my equitation career and my beloved horse, Leroy; before college and graduate school; before the fiction novels and the journalism dream and before I came to write for Saddle & Bridle; before I ever entered the show ring; before I even put a single word down on paper; before all of that, and pretty much everything else, there was Beauty. 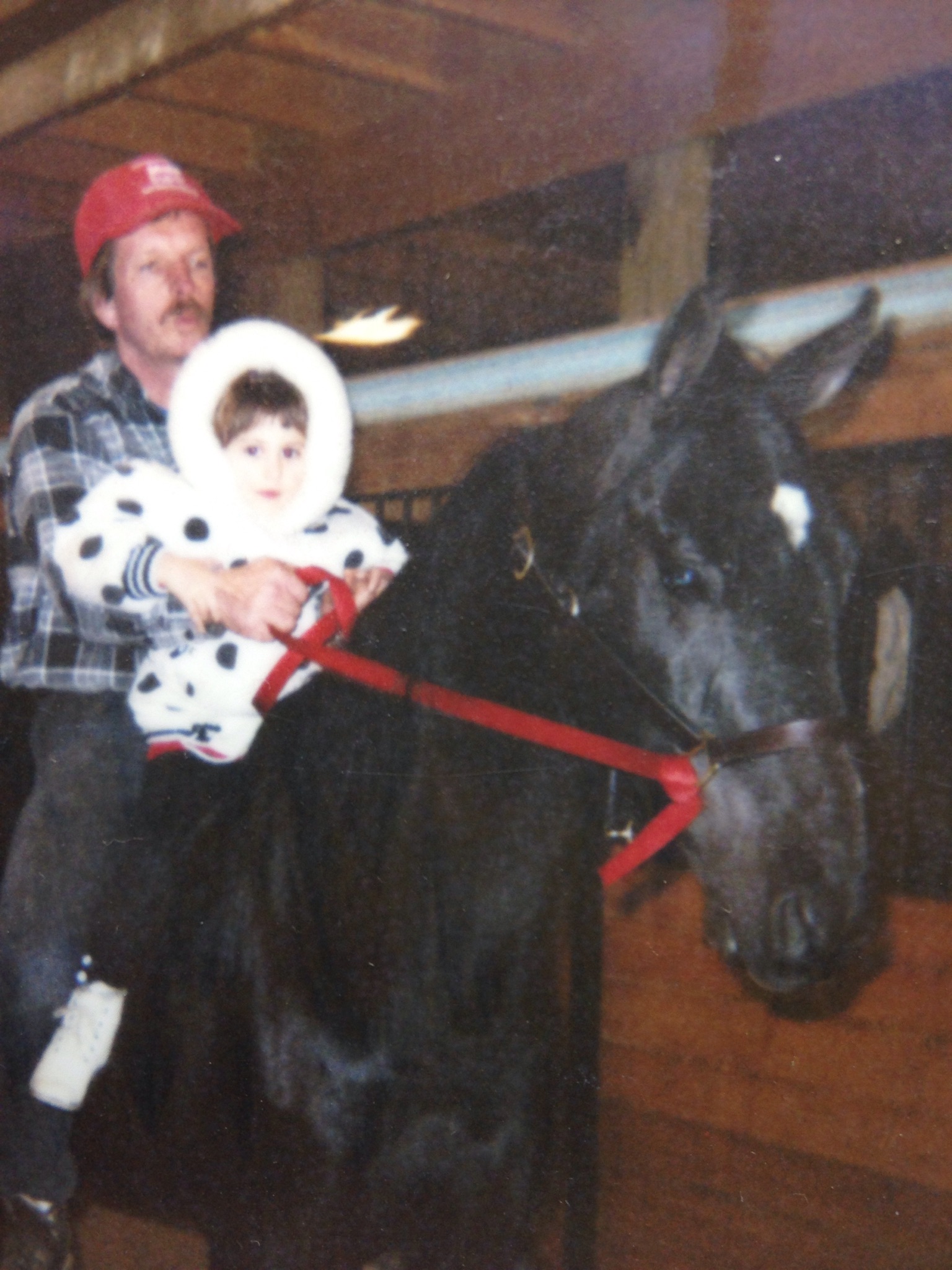 One of my many childhood rides aboard a young Beauty. A 16-plus hand black Saddlebred with a white star and three white feet, Beauty was my mother's dream horse come to life. As a horse-loving child she fell in love with Anna Sewell's classic tale "Black Beauty," and longed for a black horse of her own. When my older sister Katy showed an equal obsession with horses – wanting to do nothing but ride the ponies at the fairs – my mother decided to get her kids involved in horseback riding. Though we started off with a Welsh pony, it wasn't long before Beauty joined our family, thanks to a confused horse dealer who stopped by the barn asking directions to a nearby auction. Our trainer asked to see the horses on the trailer, and upon spotting the young black one immediately called my mother and said the long-awaited words: "I found your Black Beauty." Mom bought the horse sight unseen, and, of course, named him Beauty. But his life has been very different from his fictional counterpart, because he has been with us ever since.

I remember the day I met Beauty. At five years old, I could barely see over the stall partition, but if I had, I would have seen a towering black stallion with a long, shapely neck and intelligent, inquisitive eyes, a beauty in every sense of the word. Still, I had my opinions about the monicker. "That's a girl's name," I said with disdain, unfamiliar with the classic novel. Luckily no one listened to me. 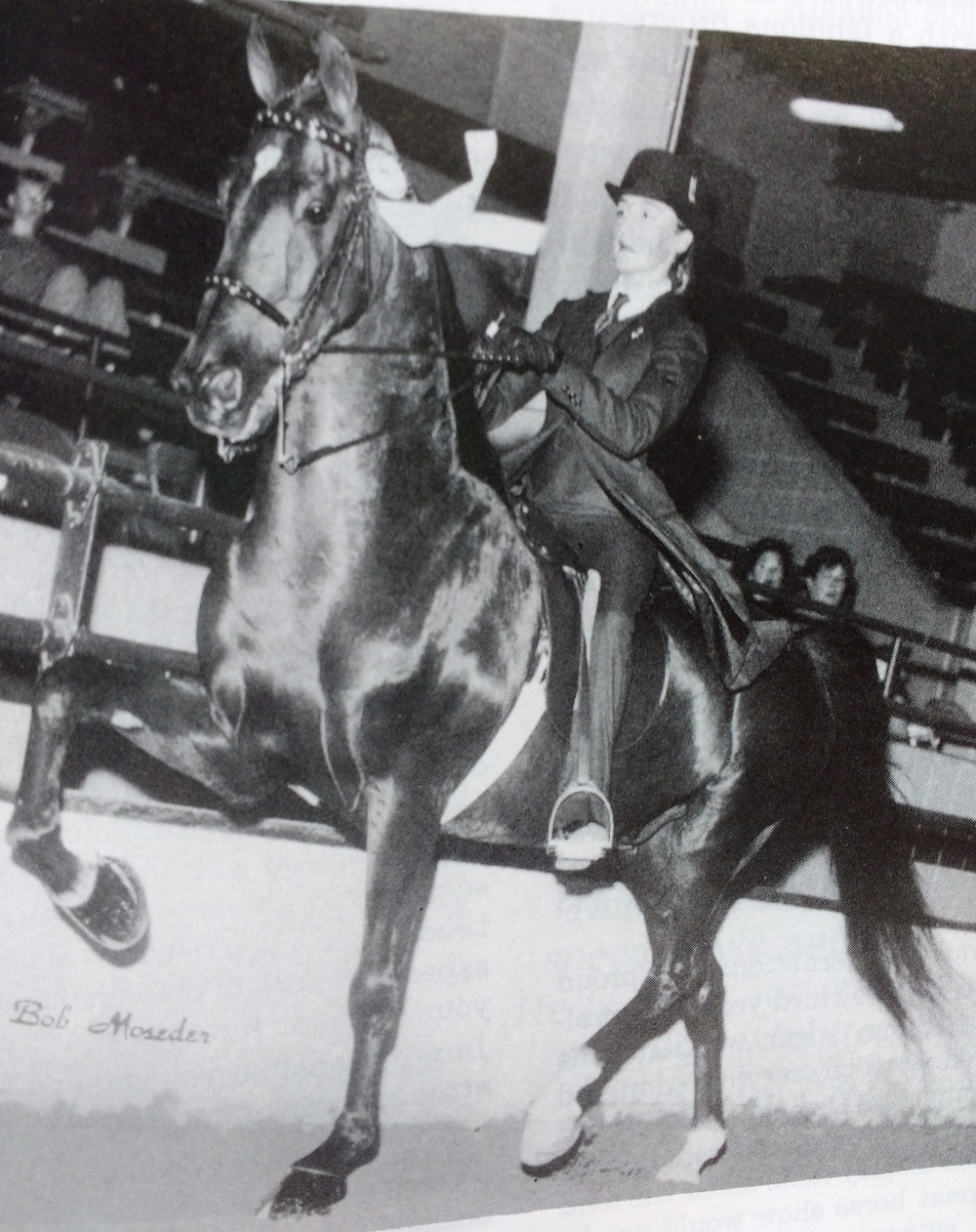 Katy and Beauty in the show ring.Most families have a cornerstone, someone who has been around a long time, seen the family through all its ups and downs, served as a guide for tough choices. This role is usually filled by a grandmother or grandfather, someone older, someone wise. A human. But not in our family. For 23 years our cornerstone has been Beauty. The handsome black colt was personable, goofy, child-like and easy to love, and quickly became the reason behind every major decision my family made. Since he was six years old when we purchased him in the winter of 1993 and I was five, I took to calling him my big brother. Like any younger sibling I admired him, and he became the main character in some of the first stories I penned. And, like all big brothers, he teased me, raising his head up after I put on his halter, literally picking me right off the ground. 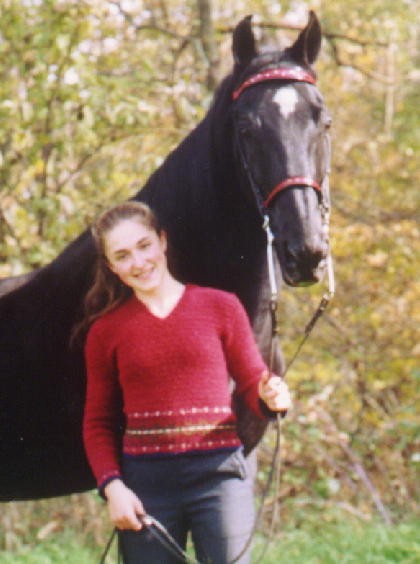 When it came to riding, Beauty was a collection of opposites. He was expressive, exciting, with tons of motion and unlimited energy, the epitome of power, and so started life in the three-gaited and park divisions. But in another sense he was about as wild as our first pony had been; his preferred method of dealing with something scary was to stop and look at it. In his almost 30 years, he has never spooked at anything. Because of this, he has pulled carriages at the local KOA Kampgrounds during holiday festivals, given bareback rides to young children, carried my sister into many a lead line class (even when he was still a stallion!), and provided me with many fond memories of riding him double in front of my trainer, cantering up and down the lane, his long black neck towering in front of me. 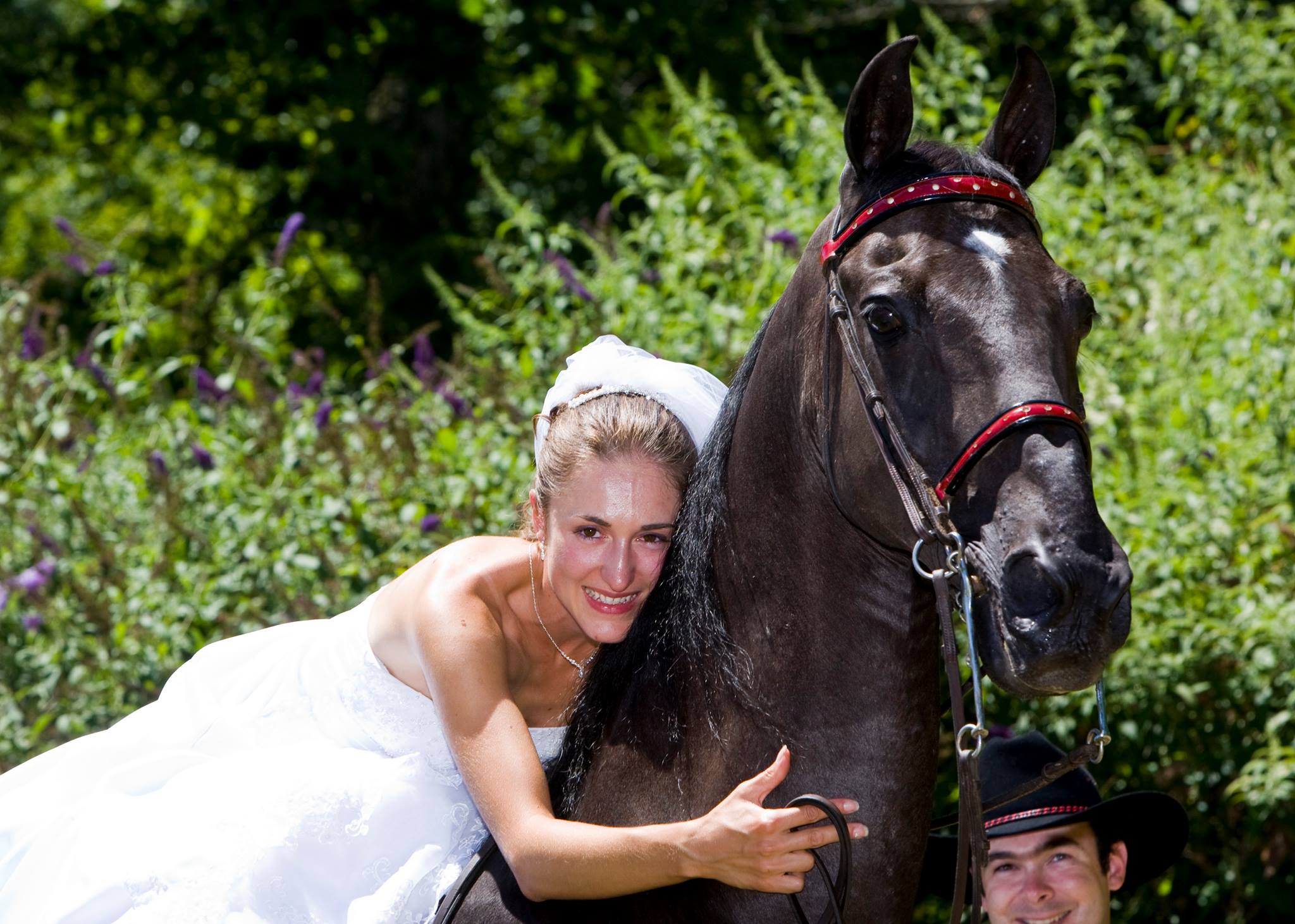 Beauty as part of Katy's wedding.

But just because Beauty might have been the safest horse to ride didn't mean he was easy to ride. He never liked to flat walk, or to canter, and was constantly swapping leads, cross-cantering or falling out. While we searched for and tried to address physical reasons for this, the canter remained a constant battle throughout his show career. Even so, he and my sister racked up an impressive array of ribbons and other honors in the show pleasure and pleasure equitation divisions, teaching her a lot in the process. He was my mother's dream horse, but in a very real way he was always Katy's.

When Katy's junior exhibitor career came to a close and she moved halfway across the country for college, Beauty stayed in Pennsylvania. My parents could no more sell him than they could sell my sister or I. He was truly part of the family. I, too, moved to Missouri a year later, but since I had lost my special equitation horse, Leroy, years earlier, I didn't have a horse to leave behind. I said goodbye to Leroy in one sense, and Katy said goodbye to Beauty in another. I'm still not sure which was harder. 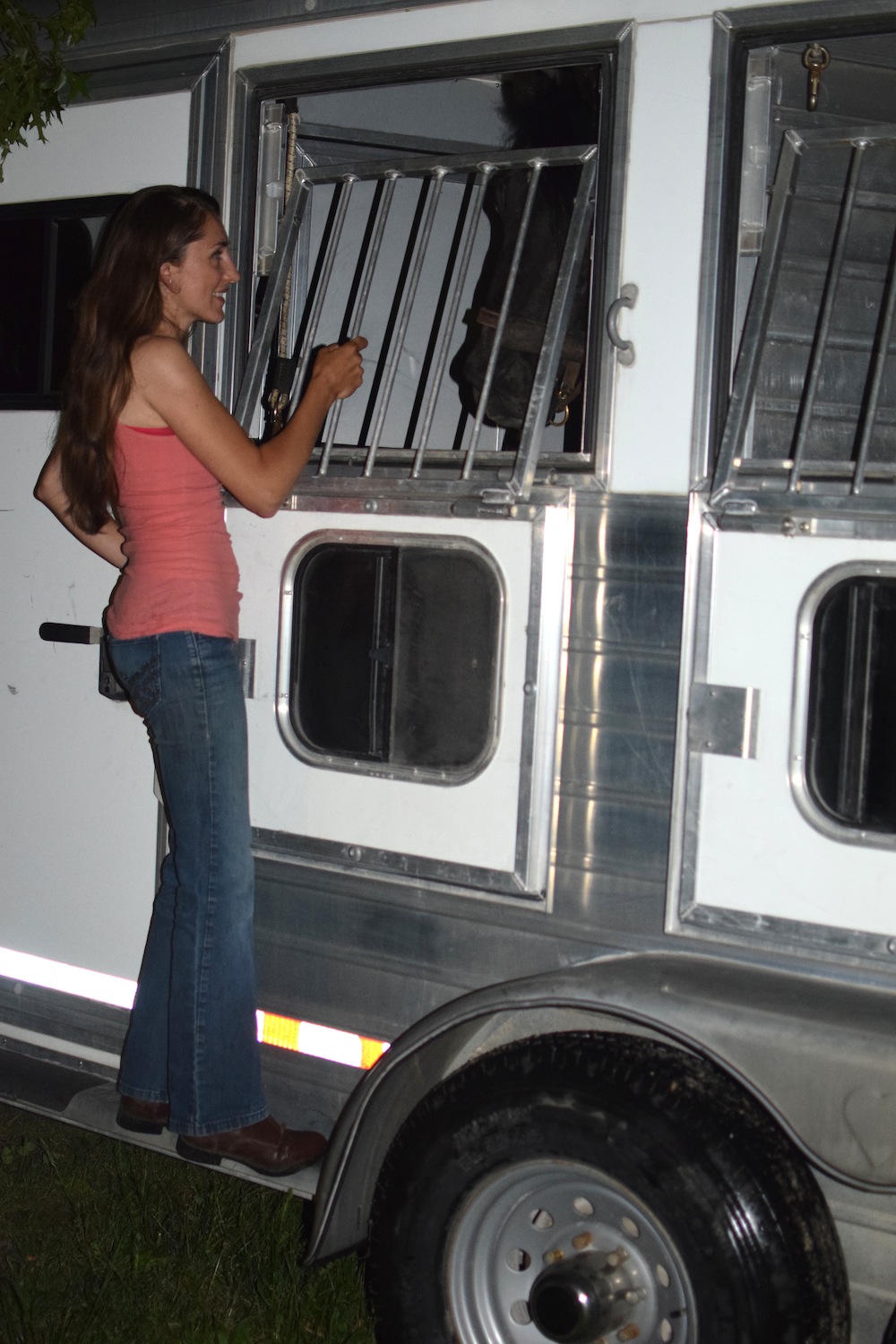 Katy talking to Beauty before unloading him in Missouri.

After college Katy found a job, married and and stayed in Missouri, and Beauty continued to live out his retirement in Pennsylvania, both of them living for the rare but joyful reunion that took place every few years. Katy's dream was always to open a barn and run a lesson program, and in 2014 she finally made that dream a reality. But the most important part of the dream was yet to be – she wanted to move Beauty out to live with her.

Beauty had seen us through so much of our lives – our childhood and teenage years, college and graduate school – but throughout all these changes, he had remained the same, still bumping me with his nose every chance he got, still refusing to flat walk. But at 29 years old, we had to face the fact now: somewhere along the way, he had actually gotten old.

He needed special feed now, special farrier care, and he had never eaten well when away at horse shows anyway. It was difficult to find a suitable hauler that was willing to transport an almost 30-year-old horse a thousand miles across the country because the good ones were all worried he might not make the trip. We knew the risks. But we also knew that Beauty was in excellent health for his age, and more importantly, that it was time for Katy and Beauty to be together again. So Katy and her husband John got a trailer and went to get him themselves. 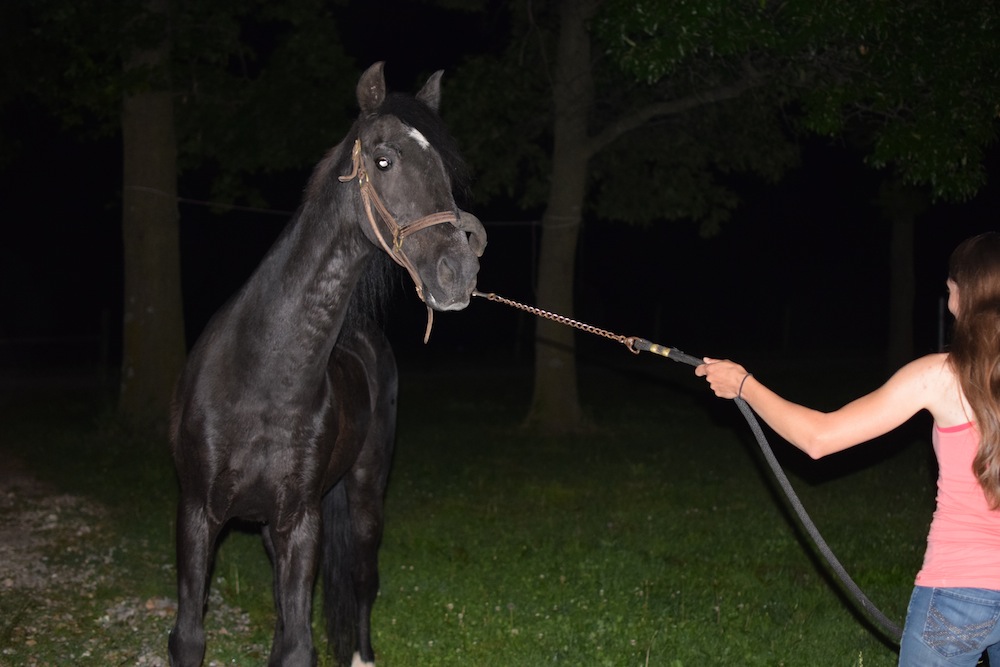 Typical Beauty, not wanting to walk on the concrete into the barn.Katy planned the trip for months, getting multiple vet checks, Soft-Ride boots for the trailer, a camera so she could watch him during the trip, a goat to keep him company on the ride. She scoped out vet clinics along the route, packed an equine first aid kit, and planned to stop every few hours to walk him and give him a break from the moving trailer. And it worked.

"Okay, so I really think he knows what's going on. He's so chill," Katy texted me mid-trip. And he remained so the entire time, riding calmly, eating his hay, ears forward, looking perfectly happy and at peace. And then 15 uneventful hours after leaving Pennsylvania, and just after the storm had passed, they pulled in at the barn.

"Hey, Beauty, look who it is!" Katy called to him, motioning toward me as she climbed up on the side of the trailer. Beauty looked out at me with that same calm expression, as if he knew just who would be waiting for him. 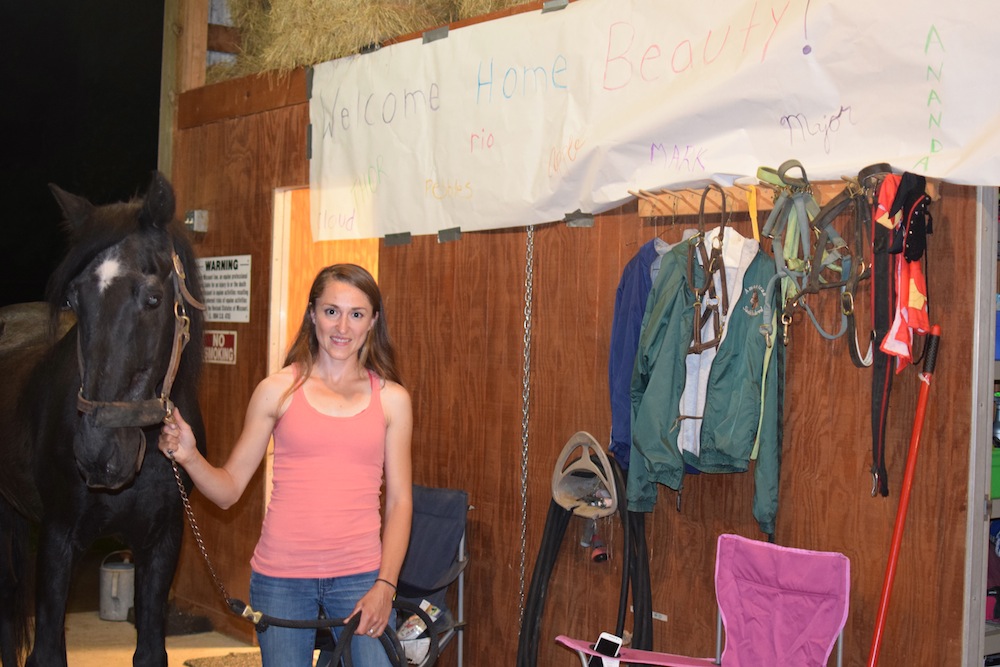 Beauty safe and sound in Missouri, greeted by his welcome sign. Unlike the fictional Black Beauty, our Beauty was lucky. He never suffered from abuse or overwork or malnourishment, he was never forced to pull heavy loads or put up with reckless riding. He was always with people who loved him. But, despite the outstanding care he received throughout his life, and especially these past few years, something was missing, because he didn't have Katy.

But two days shy of his 30th birthday, that problem was rectified for good. And as Katy led him down the ramp, into the damp grass and toward the barn lights and the freshly-bedded stall that awaited him, the final words of Anna Sewell's "Black Beauty" never seemed more appropriate.

“My troubles are over, and I am finally home.”