I am by no means a horse trainer. I have never started a colt, or taught a horse to rack, or even won a prestigious ribbon at an upper level horse show such as Louisville or the Royal. What I do have, however, is a vast collective of knowledge from a variety of trainers whom I have worked for over the years. 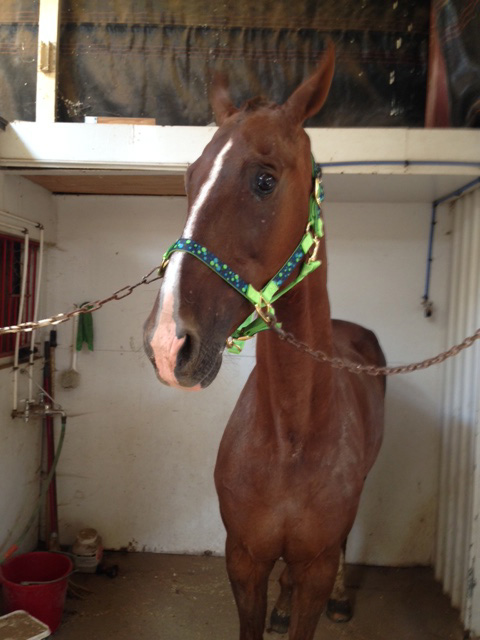 I took this right before his bath, on day 1. He was very dirty and very depressed.

I mostly teach lessons, but have also worked on the training side of the Saddlebred industry, watching trainers work horses and melding together my own methods. Therefore, some of the training methods I will describe here are methods I have learned during my journey to become a professional horsewoman.

I unloaded Slider at 4 a.m. into his stall. I gave him some hay, and watched him for a bit, completely ignoring the fact I was in pajamas and tennis shoes. You know, appropriate barn attire. He stood in the corner of his stall, hiding from me and refusing to eat. He did slurp down his water, which I refilled before I left to go back home.

When I returned around noon he was still sullen and sad. He had not touched his hay but had continued to drink water. He’s had a long few days of travel, I thought, so perhaps he was just tired, confused or depressed. Maybe he was thinking he was just in another place to be a driving horse. I can’t imagine how these horses must feel while being transported spot to spot with no one to love on them or pet them, but whatever Slider was feeling did not seem to be happiness. As much as we want to humanize that they “know” they are in a new home, or they “know” they have a better life now, I am more of the opinion that we, as caring owners, riders, trainers, etc., need to SHOW the horses this through our actions and our treatment of them. They can’t tell where they are, and need to be shown how they will be treated. I have been working him to this creed and it seems to be working. 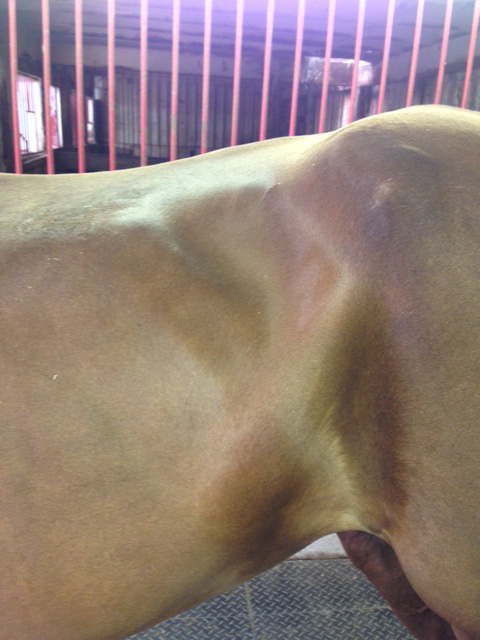 Slider is very thin in the hip area.

Anyway, on that first day I initially took him to the wash rack and gave him a bath. His ears were back, not to show anger, but in a nervous sense. His eyes were wide and he was snorting slightly with each exhale. I know it will be a while until I gain his trust. My Caraman never knew a rough hand or an agonizingly long day of work. This horse, on the other hand, probably had.

I ran my hand over his body, which he allowed. Hard work pulling buggies and not getting adequate nutrition for the level of work had taken its toll on him. On the horse body weight scale he is probably higher than a 2 but not a 3 quite yet. His hipbones are protruding and ribs are visible. There is little to no muscle tone on his neck and his withers are overly prominent. There is a socket between his last rib and hipbone.

I bathed him carefully with a sponge, cleaned a scrape on his leg, and toweled him. He stood like a gentleman but still had an air of nervousness and distrust. My number one grooming tool is a towel. I do use brushes and curries but after those, a toweling is best to stimulate the oil glands in the skin and remove dirt, as well as move the hair around. As he received the towel massage, he began to relax. We went outside for grass, and his ears perked up instantly. He ate the grass like there was no tomorrow and seemed much happier than when we had started bath time. 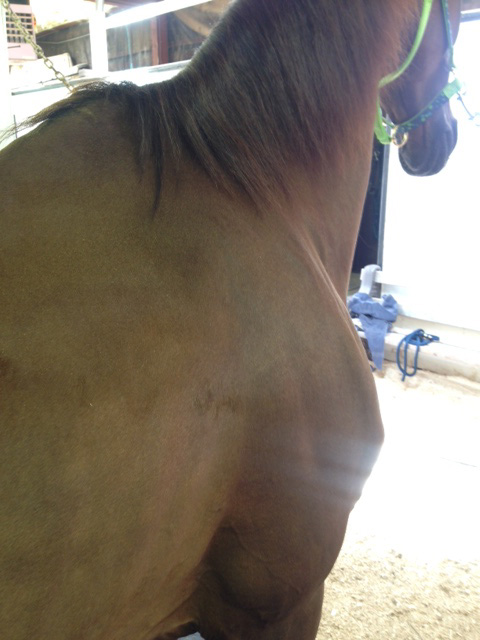 A view of his shoulder, thin neck and protruding withers.

Training wise, I feel it is wise not to ride him until I can long line him and get a feel for what his mouth is like. Being an ex-Amish horse, I can assume he has a hard mouth. He does have a show record, so I also know that he at one point knew how to walk, trot, and canter. I received a video of him being ridden at the trot before I purchased him, so I did know how he looked when being ridden. Due to his weight, I am not going to put him to work for about two weeks. I want him to get the chance to eat and put on a little weight. I also do not want to ride him until I can’t see his ribs or his hipbone. I plan on lunging him and brushing him for the time being to let him learn more about me and begin to develop some trust.

His current diet is a plethora of hay, and only a handful of grain. We don’t want to overload his stomach and cause colic. He is also receiving electrolytes to encourage water consumption, Cool Calories fat supplement, and a daily treatment of being spoiled by peppermints, which he accepts very timidly. 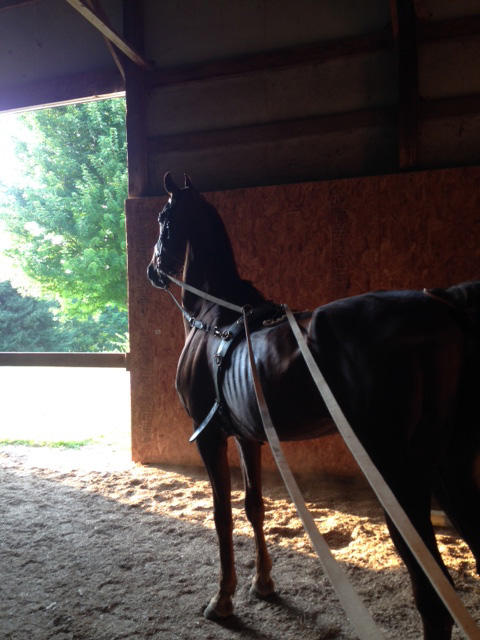 His ribs were very visible on day 1 of long lining, but he still has a gorgeous neck and is willing to work.

After about two weeks, he has gained a little weight. It isn’t that noticeable but his mood has improved. Another improvement is his coat condition. It has become shinier and has a little more shimmer to it. He is still very thin though, so we only work for about five to ten minutes. He usually doesn’t break a sweat yet when we work, but he is puffing and his nostrils are flared when I call it quits with him. The fastest way to do anything correctly is slowly.

Our current lesson is very basic; I want to be sure he understands what “whoa” means, and be sure that he can steer and turn, as well as shoulder fore (to the inside of the ring) when asked to on the long lines. He seems to be making progress. I am just taking my time and going over the basics with him; if I rush him or myself, I might cut corners or skip areas that would be detrimental to his training in the future. 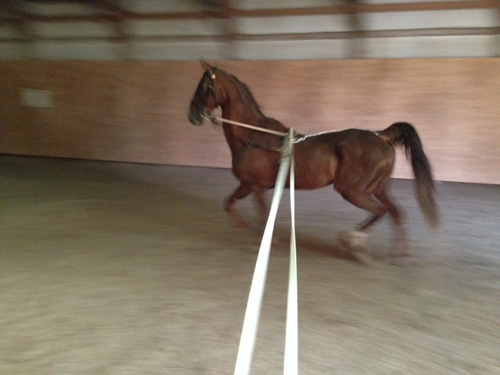 There's a Saddlebred in there somewhere!

I learned that with my lesson students. I used to feel this big rush getting the students to go from a trot to a canter once they mastered diagonals and trotting posture. In my haste I neglected to teach collection at the walk, which is vital to picking up a canter. Needless to say, once I watched my students struggle transitioning into and maintaining a canter, I did some self evaluation and realized my mistake. Now, I take much more time teaching collection and timing before the thought of cantering even comes into play. Such is life; we live and we learn. The same is true in horse training and horse rehabilitation.

I have been long lining Slider with straight lines because I haven’t been able to order long lines with a draw line on them. I have used the draw line in my recent job at Reedannland, and I think when used lightly and with sensitivity to the horse’s mouth, they are a phenomenal tool. I also have been using a straight bar rubber bit. I am of the opinion that the lighter and softer the bit the better, until the horse tells me otherwise. So far, Slider is responding well to the bit and has not been diving down on it or working in an out of control manner that says he needs something to help redirect his attention to the task at hand.