Welcome to our new blogger, Erica Mundt! Erica graduated from William Woods University with a degree in equestrian science, and is a riding instructor in her home state of Iowa. She will be blogging about her journey with her new rescue Saddlebred, Fast Friends, or "Slider." 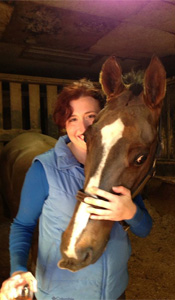 I hated Caraman at first, but as the years passed, we developed a very special bond.Everyone has that one special horse. That horse that is your soul, your everything, your entire reason for loving horses. For me, it wasn’t the first horse my parents bought for me, or even the second. My perfect horse was the third horse my family purchased, and he wasn’t even bought for me. He was intended to be my sister’s. As a result I was extremely jealous and hated him at first. Even when I grew and my sister didn’t, and my 15 hand Saddlebred pleasure horse became hers, and I gained her 16.2 hand tall Saddlebred, I still hated him. I hated his lumbering canter and his inability to walk through a stall door. He had to run through it, every time.

As the years passed, we slowly developed a bond. We had decent shows together, never winning much, but it was fun. Then one summer, my trainer Vikki Vogel suggested something foreign to me: hunt seat.

The next year we never placed lower than third, winning plenty of hunt seat championships and even placing third in a huge field in Saddle & Bridle’s Hunter Seat Classic in St. Louis. Being a freshman at William Woods, I interned that summer with Vikki, and worked my own horse. I definitely will not take the credit and didn’t do it alone, but there is a bit of an accomplishment when working that hard to change divisions and placing so well. Throughout his hunt seat career he was a formidable opponent. 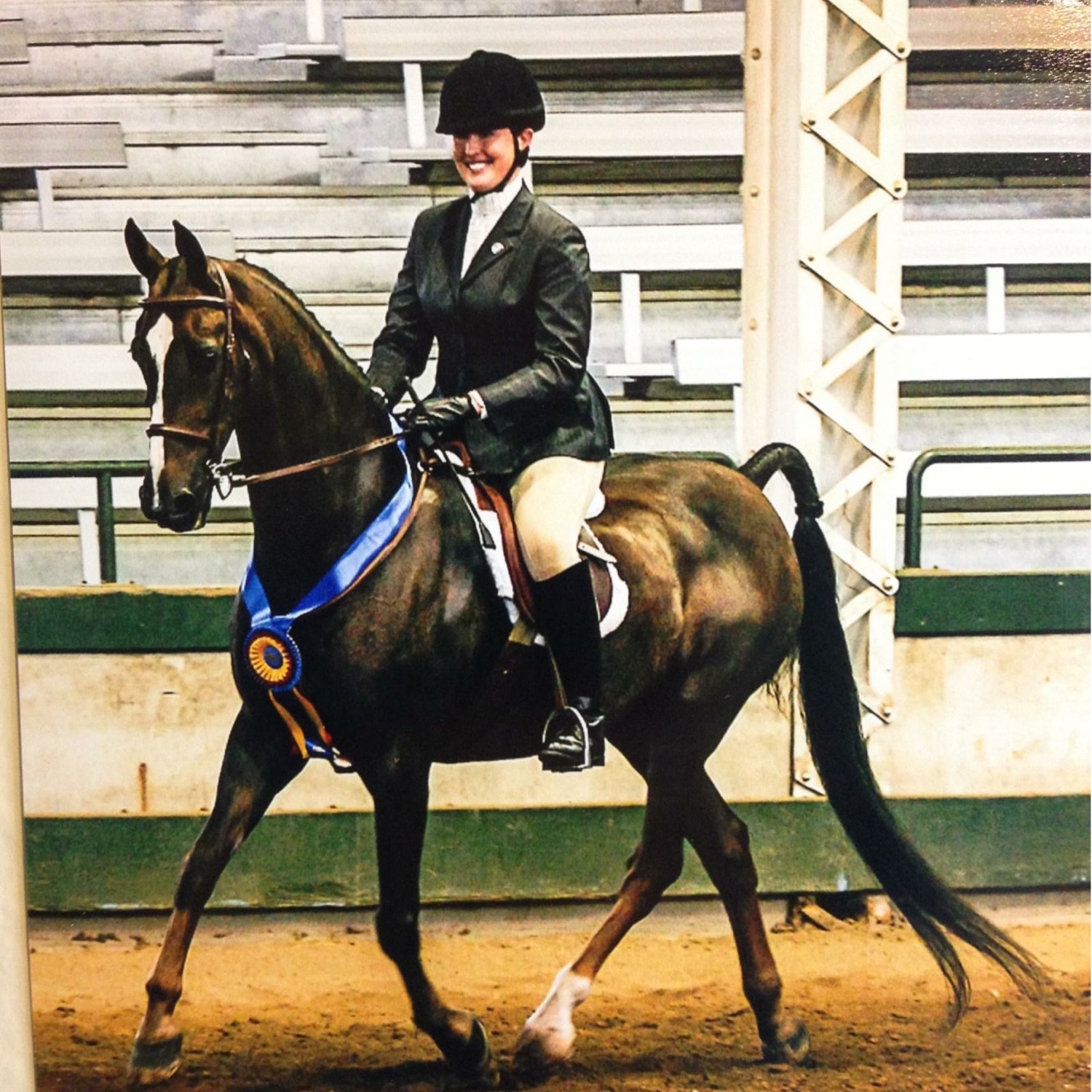 Caraman and I, taking one of his many hunt seat victory passes. Photo by Cool Shot Photography.

I won’t dwell on him much longer, just to say that he never won a CH. He will never be known as CH Caraman. But to me, he was a CH. He worked so hard for me. He never had a mean bone in his body. I eventually became a riding instructor and he was my go-to horse. Safe, dependable, happy. Just one of those once-in-a-lifetime versatile horses that defines the breed and kept stability in my ever-changing life. No matter what, Caraman was there with bright eyes and bright ears.

Fast forward to May 30, 2015. I was recently engaged and headed to a friend’s wedding when I got the call no owner wants to hear. He was colicking and it wasn’t looking up. He had, that morning, just given a beginner lesson to a small 9-year-old girl, and had seemed okay during noon barn checks when I left. In two hours he was on the ground sweating and rolling. I returned to the barn and walked and walked and walked him, but the gut sounds never returned and Banamine was not helping. He was taken to the emergency clinic, and from there I waited up all night, wondering and worrying and praying. At midnight I received a call asking for permission for surgery because his colon had flipped over his spleen. And two hours later, I received a phone call saying on top of this, he had a seven-foot tumor in his small intestines that was going to be difficult to remove. 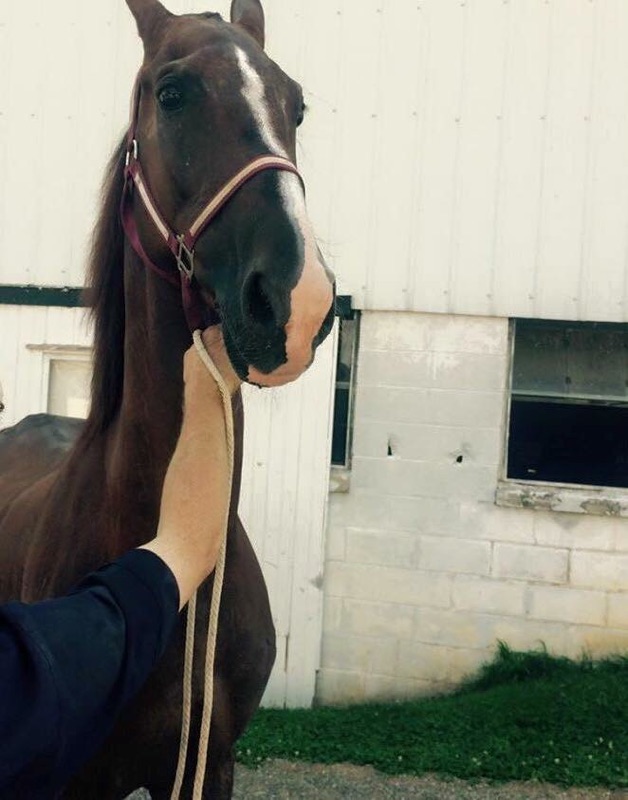 This is the first picture I saw of Slider.

I know it was for the best. He was suffering. But as any horse owner knows, the pain of losing your special horse is so real, and so painful, it was difficult for me to function for weeks on end. Walking by an empty stall for several days was too difficult for me.

I told myself that I would never buy another horse. I couldn’t do it. I would never find a Caraman again. Plus, I said, you are getting married. Focus on that. You don’t need a horse.

Life went on. I kept teaching lessons. Worked on wedding details. Grew a garden. But there was still that empty heart.

As time went on, my emptiness began to fade and my world grew brighter again with the love and support of my family. I was able to talk about Caraman, laughing about his horse dorkiness and silliness. I began to feel okay, like I was getting over his death.

But the real changing point took place when I was scrolling through Facebook over lunch. I usually just sit in my car over lunch and browse Facebook while I eat. I’m not much into liking, or commenting, or even adding to conversation. I hardly post anything to my own Facebook. But that day I happened upon a post from a college friend from William Woods. Her name is Jenn, and she runs Team American Saddlebreds. I have seen her post horses in need of homes or horses headed to auction, sometimes horses that used to be show horses, but, for whatever reason, didn’t make it in the show ring. 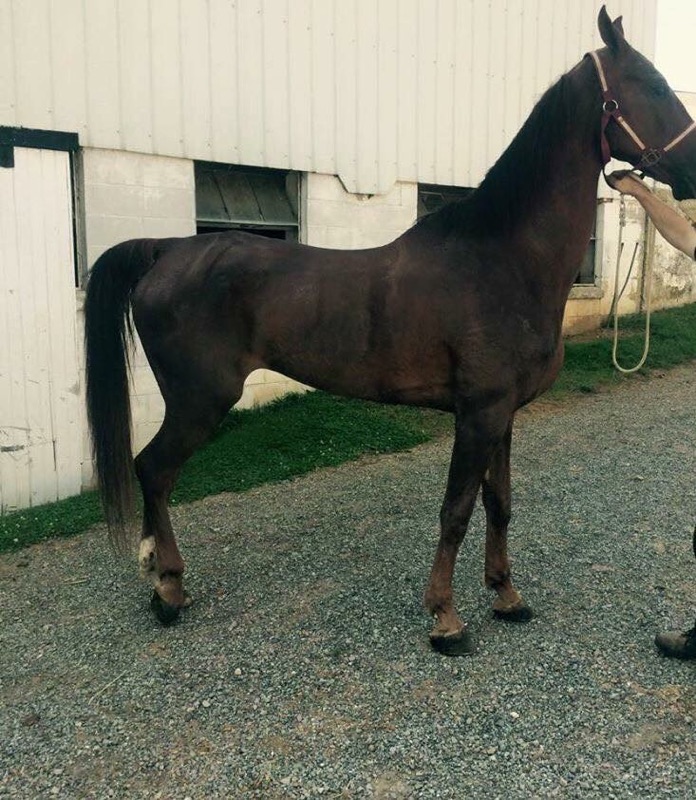 This is the photo that sold me on Slider. He looks so much like Caraman in this shot.

She had posted an older gelding. His picture just looked sad. Ears back, no emotion on his face, hopelessness apparent in his stature, expression and carriage. I remember thinking to myself how sad he looked. I side swiped and about choked on my lunch.

The picture was a simple side shot of this horse’s body. Yes he was skinny, yes he had pronounced withers, and little muscle tone. But the neck and head from the side, along with the coloration, was a dead ringer for none other than my beloved Caraman.

“No Erica, don’t do it,” I said to myself, and shut off my phone. I didn’t need a horse. I had a wedding coming up and needed to focus on that.

But it wasn’t long before my heart won out and I had contacted Jenn. “What can you tell me about that Fast Friends horse?” Not long after, the horse was on the trailer from Pennsylvania to Iowa. I met him on a humid night at 4 a.m., unloaded him from the trailer, and settled the wide-eyed, emancipated ex-Amish horse into his stall.

This is where his new story begins. And where my own heart learns to reopen, heal, and accept a new horse into its life. This is a story of our journey together. I do not know where it will take us, but I want to document it to bring light to helping these rescue horses, because sometimes we just need to open our hearts and help repurpose our breed, even if those hearts are still on the mend.