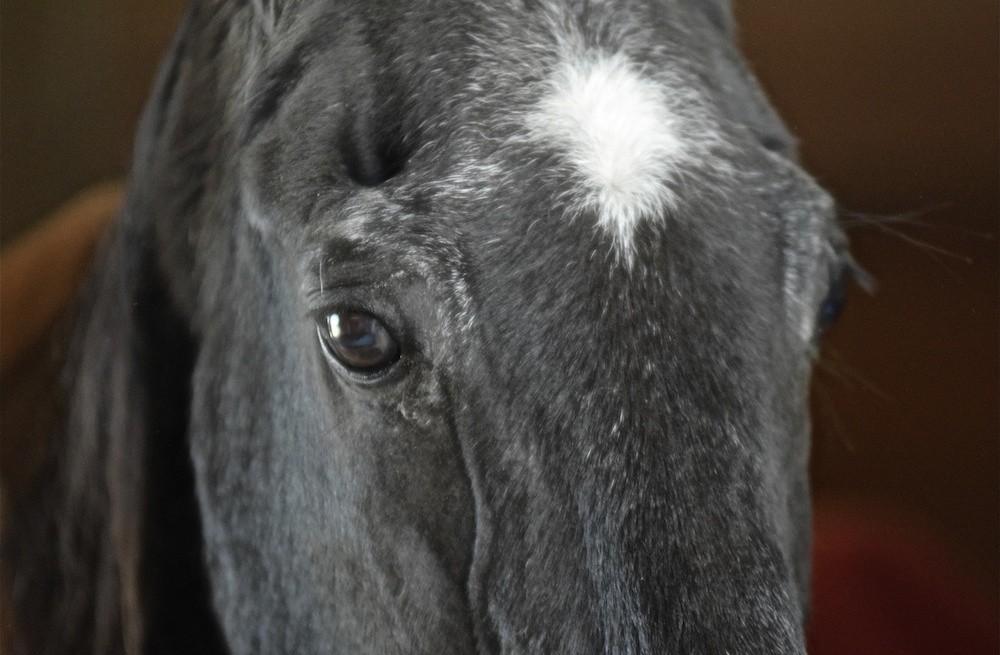 Today’s American Saddlebreds may look quite different than their original ancestors, but even then, the long necks, smooth gaits, endurance, and willing personality stood out to the founders of our country. In fact, the American Sadddlebred breed is deeply rooted in the history of the United States of America itself.

The first documented case of one of these special horses, back then referred to as “The American Horse,” was in 1776 in a letter written by a United States diplomat asking Continental Congress to send one to Marie Antoinette as a gift. He knew the beauty of this grand breed was unlike any the queen would have ever seen. Due to their impressive speed, stamina, endurance, and striking looks, these horses quickly became the preferred mount for generals and other higher-up military officers throughout the Civil War. 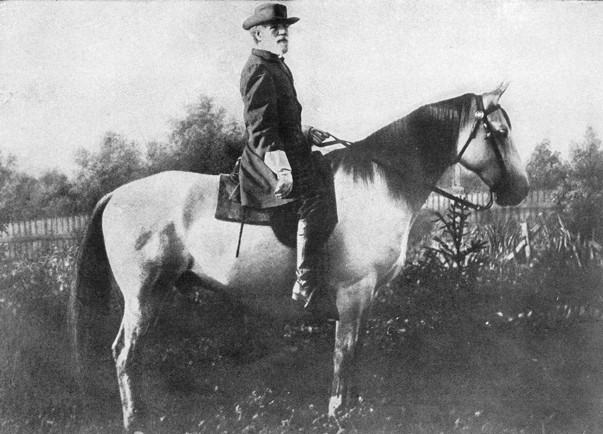 Perhaps the most well known Saddlebred to face the battlefields was Traveller, the gray warhorse of Confederate General Robert E. Lee. Traveller was known for his strength, speed, and stamina when in battle, and was said to have held up better in battle and on long marches than any other breed in the military. There has been some debate as to whether Traveller was a Saddlebred or a Tennessee Walking Horse, but in truth, he – like the rest of his Civil War comrades – wasn’t officially either. The American Saddlebred breed registry wasn’t formed until 1891, and the oldest Tennessee Walker breed association wasn’t founded until 1935. However, Tennessee Walkers and Saddlebreds descended from similar ancestors known as Narragansett Pacers and Canadian Pacers. Traveller was classified as a “Kentucky Saddler,” and depending on what breeds were mixed with these horses at the time, they developed into either American Saddlebreds or Tennessee Walking Horses.

Traveller was originally named Greenbrier, and born and raised in Greenbrier County, Virginia by Andre Johnston. He took first prize at the Lewisburg, Virginia fairs in 1859 and 1860. He came into military service in 1861 when Joseph M. Broun was commanded to purchase the best horse of all of Greenbriers County’s stock, selling for $175. 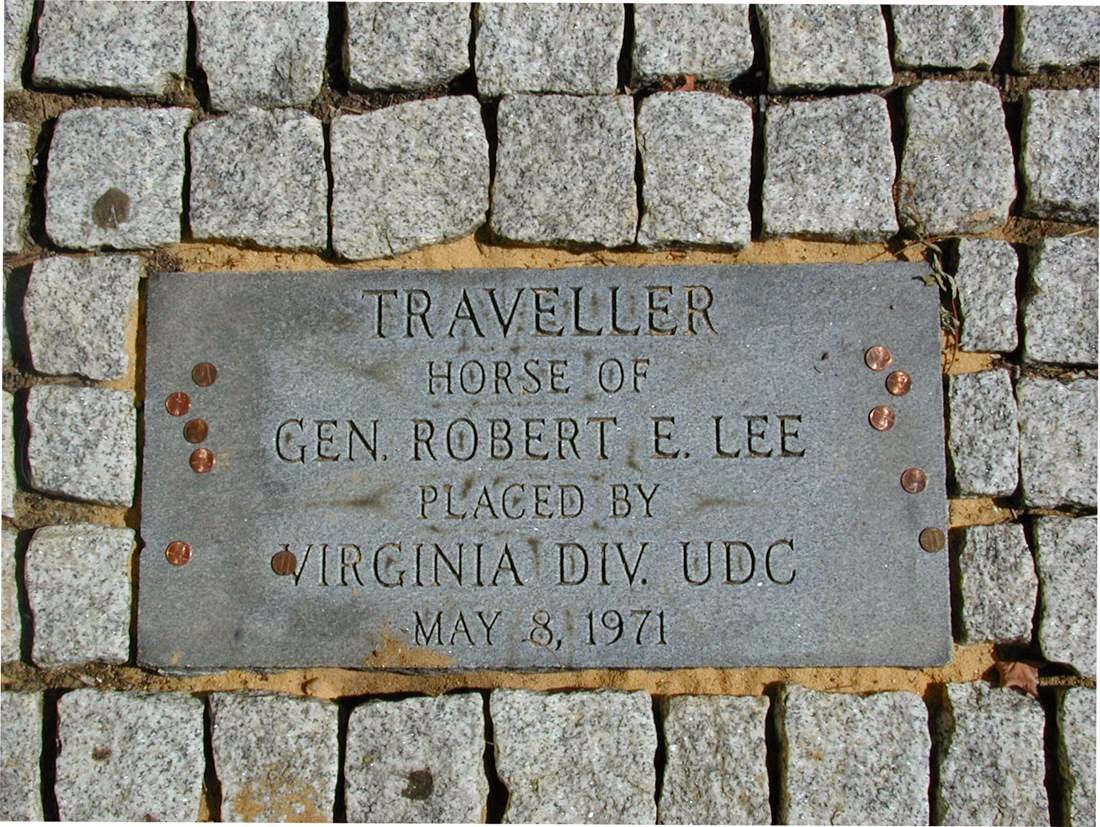 The grave of Traveller on the Washington and Lee campus.

“... Greenbrier was greatly admired in camp for his rapid, springy walk, his high spirit, bold carriage, and muscular strength,” Major Thomas L. Broun wrote in Confederate Veteran: Volume 6. “He needed neither whip nor spur, and would walk his five or six miles an hour over the rough mountain roads of Western Virginia with his rider sitting firmly in the saddle and holding him in check by a tight rein, such vim and eagerness did he manifest to go right ahead so soon as he was mounted.”

After taking a great liking to the gray colt, Robert E. Lee purchased Greenbrier for $200 in February 1862 and renamed him Traveller. However spirited Traveller was, he was hard to frighten in battle. Neither cannon fire nor gunshot could rock his nerves. After the war, Traveller went home with Lee to Washington College in Lexington Virginia where his admirers would come from all over for a look, and if they were lucky, a hair from the famed horse.

Traveller outlived Lee but only by a few months. In retirement Traveller was punctured by a nail and contracted tetanus, for which at the time there was no treatment. After having his bones moved around for many years, Traveller came to his final resting place in 1971, next to the Lee Chapel on Washington & Lee Campus. The gates to his stable are traditionally left open to let the spirit of Traveller wander freely.

The most artistically depicted Saddlebred from the Civil War was Cincinnati, the horse of Ulysses S. Grant, General and later 18th President of the United States. Cincinnati was known for the speed he inherited from his sire, Lexington, the fastest Thoroughbred of his day. He was immortalized in virtually every statue or bronze of Grant, the most famous being the Ulysses S. Grant Memorial at the base of Capitol Hill, Washington D.C. 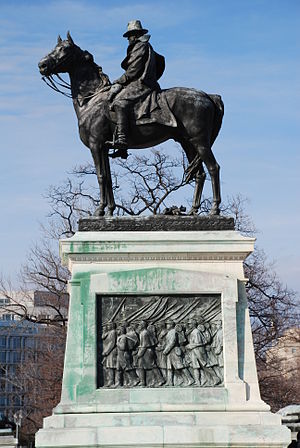 Grant always had a love for horses; at graduation from West Point academy he gave a jumping demonstration for the crowds, and throughout the war was given many beautiful horses. He came to own Cincinnati when he received a letter from a man known as “S.S. Grant” who said he had great news for the general and he must tell him right away. Grant wrote back and met the man in a hotel. The man said he owned “the finest horse in the world” and that he would like to gift him to Grant. The man was ill and would no longer be able to ride, therefore he wanted the horse to go to someone who would appreciate how special he was. He did have one condition: Cincinnati was never to be in the care of someone who would treat the horse badly, and would never be sold to a home that would ill-treat him. From that day on Cincinnati was Grant’s preferred mount and used in all cavalry charges the rest of the war. It was written that Grant never let others ride the grand horse, with two exceptions: Admiral Daniel Ammen, who saved Grant from drowning as a boy, and President Abraham Lincoln, who spent a lot of time with Grant near the end of the war.