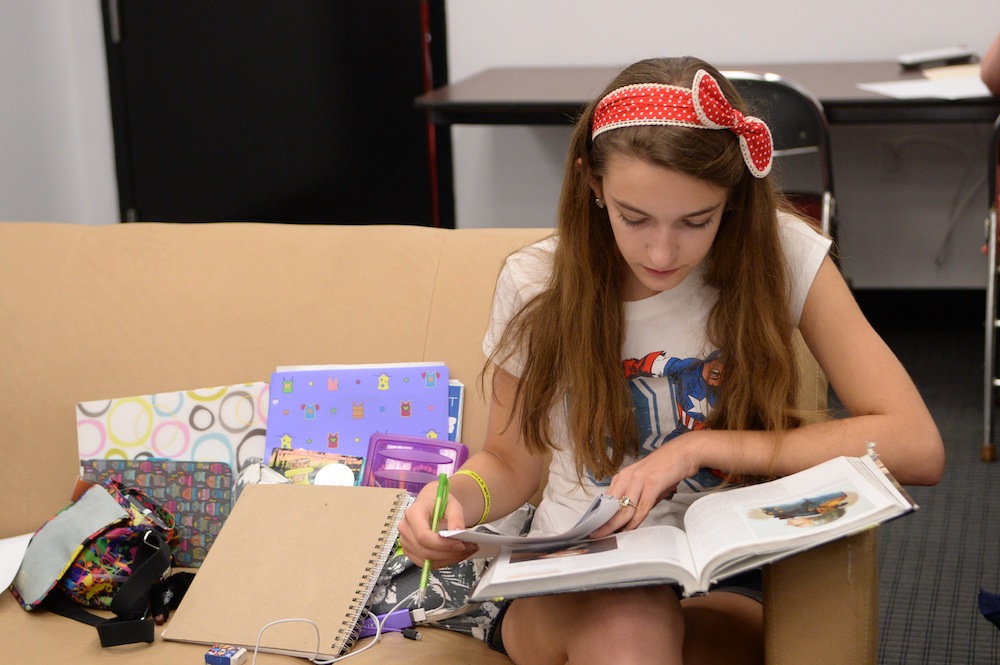 As August and the World’s Championship Horse Show quickly approaches, it brings with it the end of summer and a new challenge for young riders on every show circuit: balancing the time and dedication essential to competitive riding with equally demanding academic requirements.

From grade schoolers to high schoolers and college students, young riders make up a large percentage of the show horse industry. While student status works in their favor during the summer months, the fall and spring shows, and sometimes even Louisville, can become a nightmarish juggling act of missed material, makeup tests and suffering grades, but it doesn’t have to be that way. It is possible to keep up with schoolwork while showing at a high level; it just takes a little communication and a lot of planning ahead.

While it may sound obvious, the first and often biggest hurdle to overcome in regards to balancing school and horse shows is simply managing missed class time. Multi-time World’s Champion rider McGee Bosworth has experienced this firsthand.

“A lot of times it is just difficult to understand certain concepts if you aren't in class,” McGee said. “So, the hardest part about horse shows conflicting with school is simply missing the chance to actually be in class and listen to my teachers firsthand. Sometimes it is difficult to teach myself concepts that I miss during class.”

And, of course, many schools, especially public schools, have a strict policy on how many school days can be missed, even for excused absences. Because of this, many competitive equestrians, including McGee, have turned to private schools or even home schooling.

“I went to a private high school, so I never had to worry about seat time or missing a certain number of days of school,” McGee said.

But McGee, who will begin her sophomore year at Wake Forest University this fall, has found this more challenging now that she is a college student.

“It is definitely trickier to manage horse shows with college,” McGee said. “My classes are small, so my teachers know when I'm not there. A lot of my teachers only allow you to miss two or three classes before they dock your grade or fail you completely.”

The strict policies make a bit more sense when you realize how much material can be missed even by a single absence; according to Marjorie Hanneman, a coming senior at Franklin High School in Franklin, Wisconsin, who rides under the direction of Equitate, LLC, the material missed in just a day or two can often take weeks to make up.

“I would say the hardest part would be making schoolwork up I missed from horse shows,” Marjorie said. “For example, last Mane Event I missed two days of school which resulted in three missed tests and missed content that took three weeks to fully complete.”

“If a teacher announces there’s a test and you miss the announcement then you’re left without studying,” Marjorie said.

And for high school students like Marjorie who are involved in any accelerated programs like Advanced Placement classes, life gets even more complicated.

“AP courses are technically college classes so they move fast and expect a lot of you, so by missing a class it sets you behind everyone else,” Marjorie said. “And the end of the year exams can’t be missed and normally require months of studying, which tend to take priority.”

In high school, the type of scheduling affects how much material is missed from each class as well. While traditional scheduling calls for a six to eight-period schedule, block scheduling, which has been gaining popularity in recent years, consists of three or four longer periods of daily instruction.

“My school has block scheduling with four classes a day, each an hour and a half, so missing one day is like missing two,” Marjorie said.

And then there are the classes that are difficult or impossible to make up.

“Gym is actually one of the hardest to make up, which is ridiculous,” Marjorie said. “If you miss a class you have to swim at seven in the morning.”

While some may think that advances in technology might make it easier to keep up with schoolwork while away, Marjorie’s younger brother, Harrison, a fellow equestrian and coming sophomore at Franklin, has found the opposite to be true.

“A lot of our homework is done on the computer, so it’s hard to do it on the road or at the show,” Harrison said. 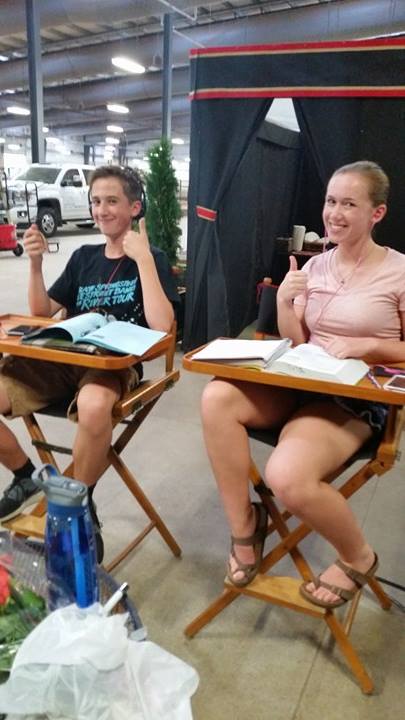 Equitate's directors chairs did double duty for Marjorie and Harrison Hanneman at the Madison Classic Horse Show as they caught up on school work while Marjorie got her hair done.To counter these problems, there are a few things students – and parents – can do. Though Tina Budzinski’s daughters, Sydney, eighteen, and Ainsley, fourteen, have been dedicated to equestrian sports for over twelve years, they have always been encouraged to make school their top priority.

“Doing well in school equals the privilege of riding,” Tina said. “They keep the balance by staying organized and keeping an open line of communication with their teachers.”

According to Marjorie, this organization and communication is vital when preparing for the longer shows.

“For the Royal I’ll typically tell my teachers I’ll be gone for a week a month in advance so they at least know and can look that far into their lesson plan,” Marjorie said. “Then two weeks before I’ll ask for the work I’ll miss and then divide up the work evenly per day to get done before I get back without stressing myself out too much and so I can focus on the show.”

And at a busy horse show, when you do things is nearly as important as what you do.

“Set a plan as to which assignments you are going to complete or what pages you are going to read and when in the day you will do so,” Harrison said. “Personally I suggest in the morning or afternoon break depending on when you show.”

But sometimes homework can’t be completed before the show or during the breaks, and it may require making a few sacrifices.

“Even though you want to watch every session of the show, sometimes you just can’t,” Tina said. “Choose the sessions you really want to watch and set aside homework time.”

Some students also get creative with their study time, making use of travel time in the car on the way to practice rides, or on the plane on the way to the show.

“I live an hour away from my stable so I’ll typically do homework in the car to keep up with basic schoolwork on school nights,” Marjorie said. “This past Madison Classic, I got work from my teachers and was working on it while I was getting my hair done.”

Some shows, like the UPHA American Royal and the World’s Championship Horse Show, have even begun offering a special space for students to complete their assignments through a program known as the UPHA Open Gate Learning Center. Designed to help students in grades 5-12 keep up with their school work while away at shows, the Center provides a quiet study space, internet and printer access, and even a certified teacher to provide academic support and even monitor tests. It is a good alternative for many students, especially those who learn better in a more structured setting. 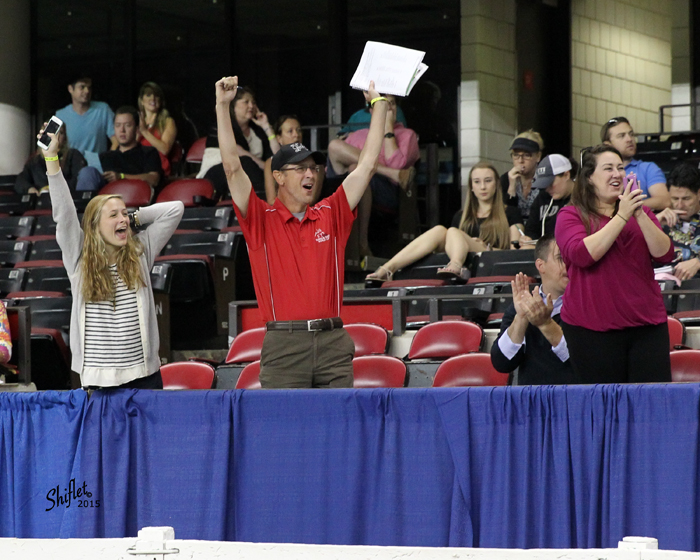 McGee Bosworth and her father Allen celebrate trainer Mary Orr's win with CH Lets Talk at Louisville in 2015. McGee was unable to show T because of her college orientation schedule.While it’s never easy to miss school, certain times of the year are easier than others. As a general rule, spring shows affect school more than fall shows.

“I think spring shows are a little more stressful because of finals approaching and grades wrapping up,” Marjorie said. “With fall shows it’s more content-focused so you might have to teach yourself the content more than in spring when you’re doing assignments and studying.”

And though it takes place in August, the World’s Championships can sometimes be a problem, particularly for college students, since it is such a long show right at the beginning of the school year. Luckily for McGee, the fall semester at Wake Forest starts the week after the show so she won’t miss any class, but she will be rushed to move back in at school once the show is over. Her freshman year, however, was a little more complicated.

“My first year at Wake, though, Louisville was during my orientation week,” McGee said. “So I had to fly or drive back and forth to Louisville in order to show. It was definitely difficult and a lot of stress and emotions.”

Because of this stress, you may not want to plan a show right at the end of the quarter or semester, or right when school is beginning.

“I have to pick and choose when I can go to horse shows and what days I can miss,” McGee said. “A major thing that I have learned and that my trainers, Mary and Evan Orr, have really helped me to understand during my first year in college is that if I'm stressed, sometimes it's okay to miss a lesson or even a show. If I have a lot of work going on in a week, it is okay if I can't get out to the barn.”

But if you’re determined to make that show, whether it be Louisville, or any other, there are still options. Hiring a catch-rider to qualify the horse can help a student compete while limiting how many school days they miss. This is a choice McGee has had to make a few times, and she doesn’t regret it.

“College and high school are once in a lifetime things and they go by so fast, so it's super important to enjoy it,” McGee said. “Take every opportunity you can to enjoy everything that's going on in your life. You may feel overwhelmed, but also feel super lucky that you get to participate in such an amazing sport.”