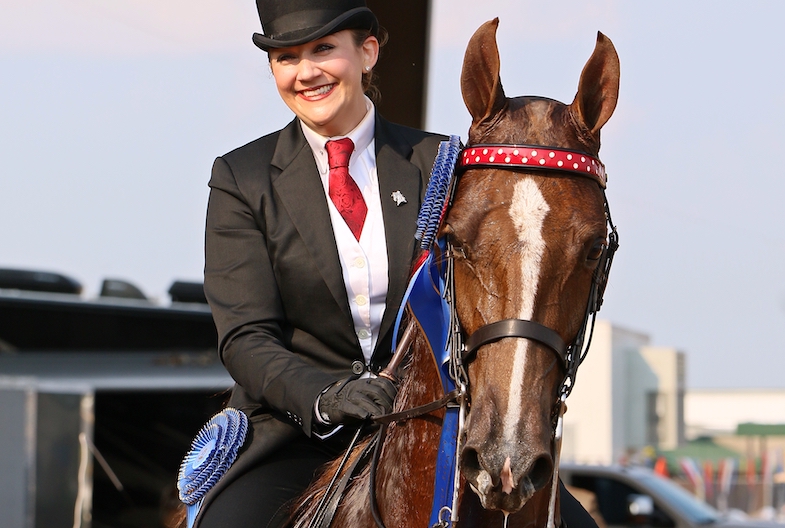 Most in the show horse industry know Morgan King as a skilled photographer and sales representative for National Horseman Magazine. But Tuesday morning at the World’s Championship Horse Show proved that she is an equally talented equestrian, as she rode HS As Lovely As Ever to a unanimous Amateur Three-Gaited Park World’s Championship win. Here are five things that you may not know about her and her ride.

Morgan began riding when she was just 3 years old.

Her first horse experiences took place with her mother in their backyard, but in 2003 she began competing under the direction of Silver Run Stables with Bill Rodgers and later Judd Stables. Throughout the years she has shown such talented horses as CH Meadowlark Jubilee, CH Hillside’s Sensation, My Minuet, and more recently, under the direction of Grey Ridge Farm, Nuttin’ But The Blues and Groundhog.

HS As Lovely As Ever goes by the barn name “Rosie."

Now 5 years old, she is by Our Axel Rose and out of HS Ima Cool Girl by Undulata’s Nutcracker. Morgan purchased her last fall, and sent her to Andre van Schalkwyk’s Lead Way Farm in June. “He just clicks with her so well,” Morgan said.

Rosie has a short (but impressive) show record.

“Her first horse show was here last year at Louisville,” Morgan said. “She didn’t do anything in the fall and she’s only had a couple of them under her belt this year … so that definitely has just been the biggest hurdle – going from an open horse to an amateur and a 4 turning 5-year-old.”

In that show ring debut at Louisville 2019, she was named Junior Park Pleasure Div. II Reserve World’s Champion with Gabriel DeSoto aboard. This season she took home wins at Gasparilla Charity with Bret Day and Kentucky Spring Premier with Andre before Morgan took the reins for the first time at Shelby County Summer Classic where the pair won the Amateur/Junior Exhibitor Three-Gaited Park qualifier and then took third in the championship. That meant that their qualifier on Tuesday morning at Louisville was just their third class together.

Their class had a workout.

After running the entire class with 19 horses, nine were put back on the rail before Morgan and Rosie were chosen as the winners. “We got a two-for-one special,” Morgan joked.

Morgan had been reserve at Louisville a number of times, but this was her first victory pass.

“When they called my name unanimously that was just amazing, and after the class it was just a feeling like no other,” Morgan said. “I couldn’t really believe it happened, and I’m still kind of having a hard time believing it happened.”

Morgan and Rosie will return to Freedom Hall on Friday night for the Amateur Three-Gaited Park Championship, but for now here is what she had to say about her qualifier experience.