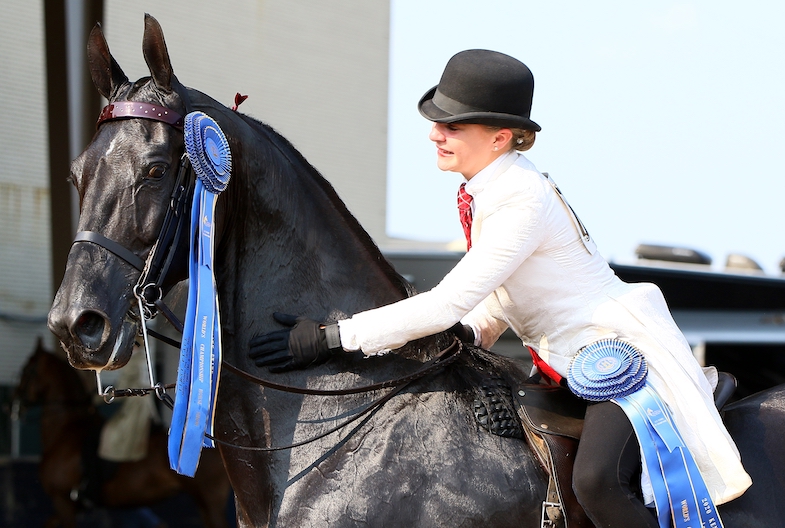 Photo by Julia Shelburne-Hitti.Exhibitors from the state of Michigan dominated the Junior Exhibitor Five-Gaited 13 & Under class Tuesday morning at the World's Championship Horse Show.

Racking away with the World’s Championship honors was the powerhouse team of Apocalyptic and Alexa Finley of Leonard, Michigan, under the direction of Whispering Oak Stables. Meanwhile reserve honors went to Dancing Warrior and Kamryn Smith of Swartz Creek, riding under the Taylor Creek Stables banner.

The win was incredibly meaningful for 12-year-old Alexa, who has known Apocalyptic since he was born. By Kalarama’s All Time High and out of Santana’s First Lady, he was bred by Alexa’s mother, Stacey Finley and grandmother Denise Siess. His dam, who just passed away this year, was owned and shown by the family for many years. He is now 8 years old.

This year, even with the shortened show season, the pair was able to take home blues at Inter-County Triple Point Show, Southern Saddlebred Spring Fling and Lexington Junior League. Then they headed to Louisville, where the pair put on the show of a lifetime in a very competitive class.

“He felt great the whole class,” Alexa said. “When I heard our number, the tears just came down. It was just an amazing feeling.”