I remember that often dreaded moment like it was yesterday; that was the day I aged out of being a junior exhibitor and knew I had finally hit the amateur ranks. It was back in November of 2015, at the American Royal, in the Junior Exhibitor 14-17 Five Gaited Championship with She’s My Justification.

As we stood in the lineup and then went to walk back up the chute and up the ramp to the top barns, I was thinking to myself “What’s next?” and “Where do I go from here?” Yes, there was that super obvious answer; you’re an amateur, duh. But I kept thinking more than that. Like do you stay remembered for all you did as a junior exhibitor? Or are you just this awkward in-between person – someone who has aged out but isn't an older experienced amateur yet? What actually does come next? 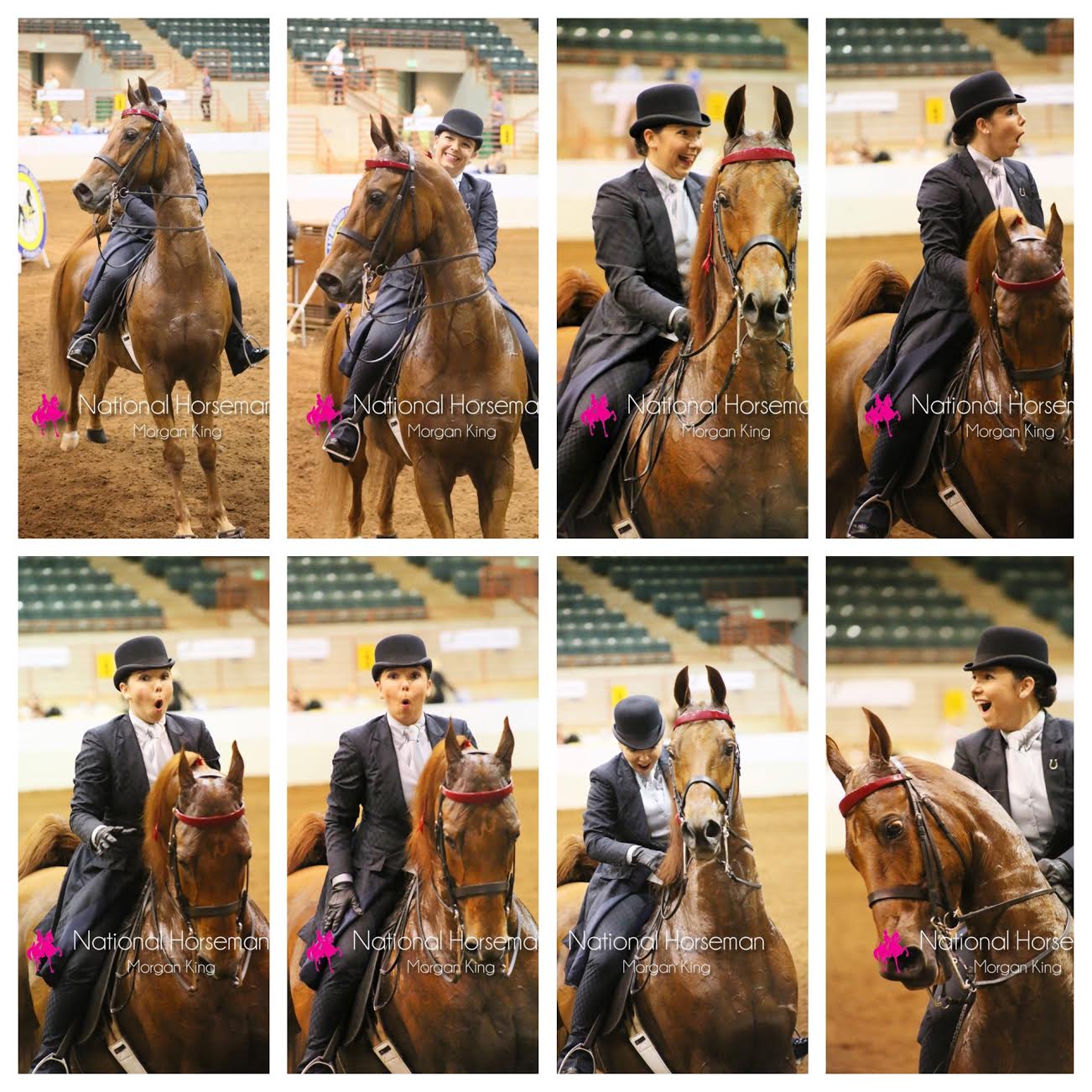 Here's what I've come to realize: it’s not a bad gig stepping up into that amateur division. Yes, I was switching from being a bigger fish in a smaller pond to the small fish in a very large pond. But I wouldn’t trade it. I found that the only upsetting thing to me was now I don’t get to watch all of those amazing amateurs I had always enjoyed cheering for in some of their classes anymore; I get to show with them now! But what an honor it is to show with some of the best in the industry and learn from them!

One of my favorite classes that I have shown in as an amateur has to be at Pro-Am Charity of last year in Perry, Georgia. I was showing Wrapped in Chocolate in THAT last class on Thursday night, the Amateur Five-Gaited class. I remember a few people asking me if I knew how many or who was going to be in my class, but I answered with my same, “I haven’t looked yet” response. I usually don’t like to check due to the fact that I can’t change it anyway. By the time we walked to the warm-up ring, I had already started to see horses I recognized and always loved watching, and I believe the number ended up to be around 8 to 10 horses in the class. I knew Junior had felt great that night and definitely hit a new level of “big” that I had never felt before, but little was I expecting to be announced the winner of the class. I proved to myself that wow, that whole age thing doesn’t actually define my horse, my ride, or myself. I actually really liked that feeling of being the underdog or the unexpected one.

Even after winning that class it still didn’t really hit me that this whole "you’re an adult" thing was real. That moment came at our first visit to Midwest Charity Horse Show. I went to show in the Five-Gaited Amateur Ladies class, and once again didn’t look at the list of numbers and names. Maybe it would’ve occurred to me faster if I had actually seen my name written next to all of the adults in the class list, but nope, I waited until far into my class for this.

I don’t think I will ever forget the moment we were racking down the rail and I saw this horse come up beside me and realized it was the great Nancy Leigh Fisher and her incredible horse WCC CH My Wonder. I know while showing your brain is working a million miles a minute, but I remember that my mind actually stopped and I thought, “wow, I’m really in this class and this is real, and that was her, and this is amazing!”

I’ve enjoyed every minute of the transition from junior exhibitor to amateur and wouldn’t change it back. There are definitely some moments when I question whether I'm good enough for this step, but my favorite part has been not counting how many years I have left. There is no worrying about a timeline, or even worse, a time LIMIT. I’ve always been a nervous wreck in the warm up ring (sorry David!), but I think most of those nerves stemmed from the immense pressure I felt as I aged higher and higher as a junior exhibitor – like there were all of these expectations for me and what if I didn’t meet them? I think I'll always be a little nervous, but it hasnt been nearly as bad once that weight was lifted off my shoulders.

Trust me, it may seem absolutely terrifying, but aging out could easily be one of the best things to happen to me in riding. I learned how to regain my confidence again.