A labor of love! That is what everyone should know when it comes to Michele Macfarlane and the tireless efforts she puts in to presenting the American Saddlebreds in the Tournament of Roses parade, on a yearly basis. I was so excited and honored that she wanted me to be a part of this year’s group, and as you can imagine, I had great expectations of what it would be like.

Carson Kressley, Nelson Green, my sister, Melinda and I were picked up at the hotel at 3 a.m. by Kevin Michaels and taken to the parade staging area for the horses. That alone was something to behold. Having lived in the Los Angeles area for nine years, I know that the freeway system has a life of its own; massive, confusing and crowed. So it was mind-boggling to find out that stretched alongside the freeway 210 extension was about ¾ of a mile of horse trailers and horses preparing to be presented in the parade.

We arrived at Michele’s staging area at 3:30 a.m. where it was very evident that the two semi-trailers, thirteen horses and about twenty-plus people had been there for many hours preparing the horses. The colorful array of spotted American Saddlebreds and a few solid colored Saddlebreds calmly hanging out in their parade costumes, while riders and helpers scurried around putting the final touches on each horse, is something everyone should see and appreciate. The horse vans were make shift dressing rooms and contained the beautiful jockey silks and helmets that were worn this year. Not to mention all the saddles, saddle pads, bridles, blinkers, polo wraps and blankets of flowers for each horse. 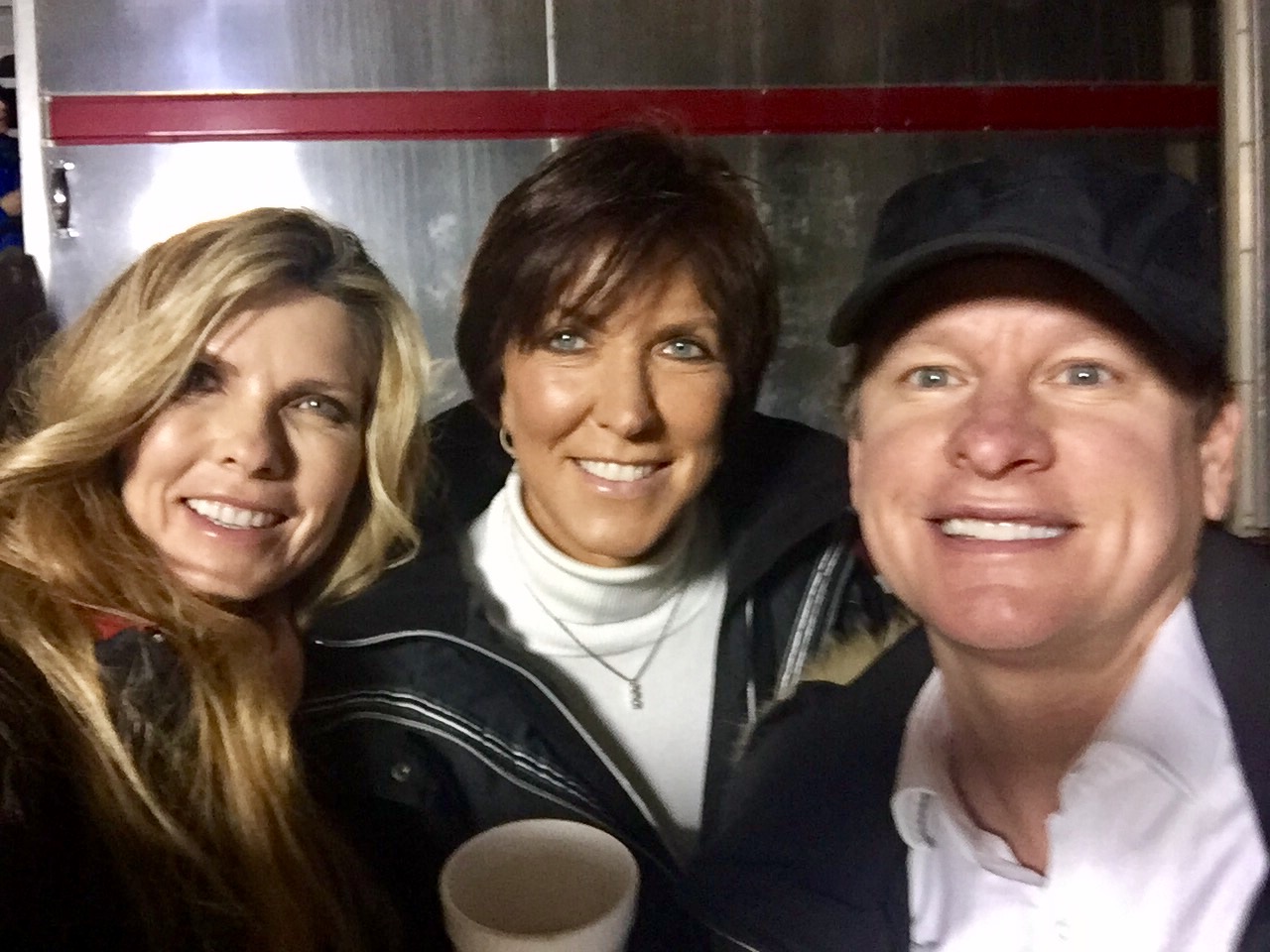 I was lucky enough to share the Rose Parade experience with Carson Kressley, my sister Melinda Moore and others.

It seemed liked minutes went by like seconds, and before I knew it, it was time to climb aboard my horse. I rode a beautiful spotted gelding named, How The West Was Won, aka “Tex.” It was 6 a.m. and the parade didn't start till 8 a.m., but to get thirteen riders on horses and headed in the right direction is not an easy task. Plus it's over a mile to where the parade begins, and you have to get in line early so everything goes off without a hitch.

It’s surreal to ride through the empty early morning streets of Pasadena on horseback. This year the Scripps group was 15th in line, right behind a marching band. The waiting was the hardest part for both horse and rider. Some of the horses were newcomers to parades and some had done many. Tex and I were doing our first Rose Parade together!

When we were instructed to get in line behind the band, you could feel the excitement of the horses. Even Tex Seemed to know how cool this was going to be. Thousands of people lined the streets – every age, race, gender and each one appreciating the hard work that goes into this event. People were smiling, waving and taking pictures, and many would yell Michele’s name as we were waiting for the parade to start. 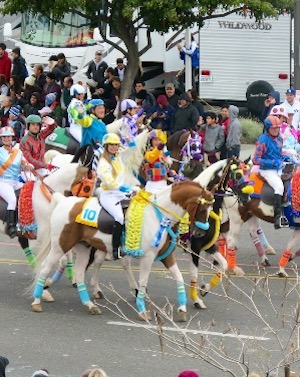 Tex and I (in the foreground) during the Rose Parade.

Then it was 8 a.m., and a stealth fighter jet silently streaked across the sky over the parade route which signaled the start of the 128th Tournament of Rose parade. What lay ahead I could only imagine. We waited our turn to make the big swing onto Colorado Boulevard where the parade begins and where all the TV cameras and network hosts are talking about each entry. And then it was our turn to show off the colorful display of equine beauty and human love for these animals.

We were lined up in three rows, and for the most part all the horses were not fazed by the cheering of the massive crowd. My horse, Tex, had about ten seconds of stage fright. Okay, actually it was the horrible timing of a parade worker shaking a black trash bag. But he quickly regained his composure and pranced beautiful. Going around that turn at the start of the parade is breathtaking, and I must say that I fought back tears of amazement and joy many times over the 5 ½ mile parade route. The sheer appreciation that the people had for the horses and the little kids whose eyes sparkled at the sight of these majestic animals made everything seems right with the world, if only for that moment.

Over a half million people line the streets of Pasadena and it’s incredible to think that they do this every year. Then to know that Michele Macfarlane has presented her Saddlebreds every year for over 30 years to this appreciative crowd, not to mention the millions that watch on TV, is something every Saddlebred enthusiast should give thanks for. 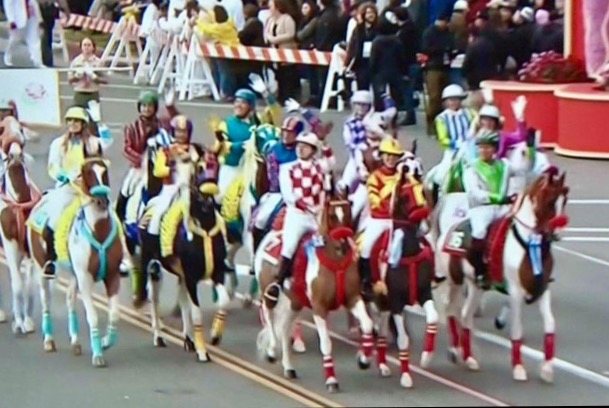 Our group included thirteen Saddlebreds.I’m in awe of the months and months of planning that goes in to the Rose parade. The organization of the riders, horses, costumes, flights, hotels, horse transportation, parades to prepare for the parade etc. Just washing thirteen horses (most being spotted) is an overwhelming thought. I can't even imagine the investment of time, not to mention the financial responsibility. I'm extremely grateful for the opportunity I was given to join this year’s riders in the amazing event.

The 2017 group of riders and their mounts were Carson Kressley on Flurry, Dena Lopez on Doctor Zhivago, Nelson Green on Sea Of Cortez, Melinda Moore on Gris, Don Trunk on Crosswind’s Hot Tabasco, Michele Macfarlane on Spotz Sensation, Savanna Miller on Dr. Doolittle, Kayce Reiner on Blue, Eric Antman on Connie, Theo Robinson on Spot, Alyssa Lopez Northcutt on Silver Lace, Susie Robinson on Gabriel’s Message (owned by Mary Miller) and Me on How The West Was Won aka Tex.

And our ground crew who kept the horse and riders safe included Craig Clapp, Kent Moeller and Wilber Amaya, who walked every step to make sure horse and rider were perfect! And those who helped get the horses ready and were right there when we needed them, I'm sorry if I don't mention you by name, but you are amazing. Additionally, photographer Rick Osteen spent half the parade walking backwards to catch great images of Michele’s beautiful display of horsemanship.

My life has been blessed by these amazing animals. I have met amazing people, been to unbelievable places, visited foreign lands and done some of the coolest things ever all because of the American Saddlebred. But I think riding in this year’s Tournament of Roses Rose Parade is the crown jewel of my life with horses! Thank you Michele Macfarlane!