Well, folks, I am happy to report that Slider is still alive and well. I write this because right during Louisville week, Iowa became incredibly humid and I came to the barn to lunge Slider. We didn’t work hard, but he broke a sweat, which he does not ever do when lunging. 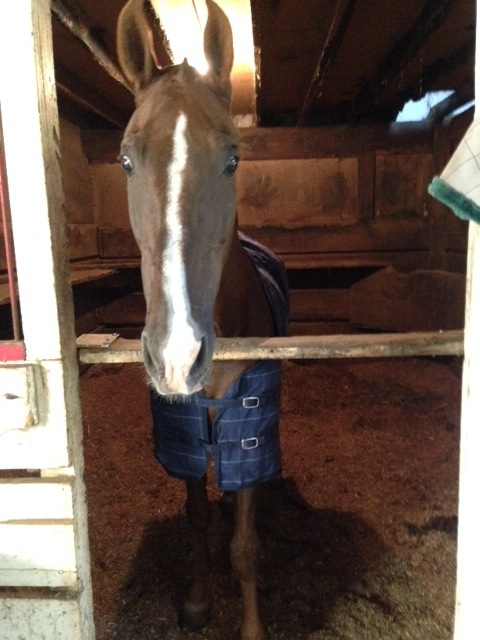 Though he gave me a scare, Slider was good as new after that night.

I gave him a warm sponge bath and let him stand, but he seemed more antsy than normal. His nostrils were still puffing after adequate cool down time, which I attributed to the heat. I turned him loose, and he immediately lay down and stayed down. No rolling. Just lay there and then ever so slightly turned to look at his belly. Then he got up, lay down again, and looked more and more uncomfortable. His breathing increased and he began to sweat more.

Oh no. Not again.

I hit panic mode. I can’t have two colics in less than six months. My dear love Caraman and now the horse I am growing more and more fond of. And of course, this was happening at a time when I also had a riding lesson to teach. We gave him a dosage of Banamine, and my mother, who had just taught therapeutic riding lessons, quickly got him up and moving, and hand walked him while I taught my lesson. I was a nervous wreck, but when the lesson had ended, Slider was in the back of his stall, munching on his hay, looking quite content. Whew! I breathed a sigh of relief and then told him, as though he was a kid, not to do that to me again. He didn’t care nor did he flick an ear. But it seems human nature to humanize our animals sometimes, and talk to them as though they are people and as though they will understand. I think the heat of the moment (literally and figuratively!) got to me. No more colic for me this year, thank you!

So he did come out of it, and we monitored it for a week, but no other signs of it came. We guessed it must have been a gas bubble or sometime minor, but I would rather treat colic symptoms immediately and have it be next to nothing than to ignore it and have to lose another horse.

In other news, the next week, I decided he has gained enough weight for me to ride him! I first took a lot of time lunging him to get some energy out. Who knew if he had some bucks in there, or if he would be cold-backed and feel like a camel when I got on? Plus I wanted to remind him of my rein cues with the long lines, and therefore did every single gait both directions with the long lines – trotting, cantering, walking, halt, and back. If he won’t do it from the ground, he probably won’t do it when I ride. Therefore, I lined him that first day. 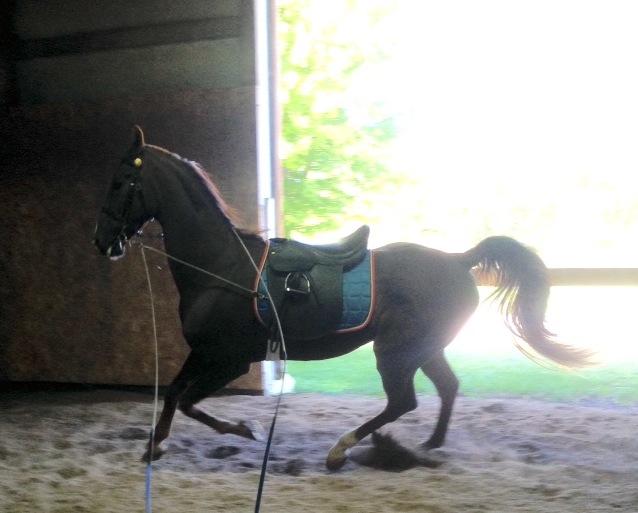 I decided to long line Slider before our first ride to work any bucks out.

For me, as a riding instructor, the hardest step for my students is often getting on, especially for the new beginner riders or someone who has fallen off. Similarly, when getting on a new horse, it is one of the hardest steps as well. There are a lot of factors that I took for granted with Caraman. I knew Caraman would stand there, not move, and wait for me. Caraman wouldn’t buck, take off walking, spin, or release his tummy so the girth was suddenly looser. He was just solid. But what about this horse? As a word to the wise, readers, always be cautious when getting on a new horse. Yes Slider long lines okay, and lets me groom him, and is becoming friendly. But what kind of past did he have in regards to riding and mounting? Would he stand, move, slide away, step towards me, spin around me, try to run? What about when my weight settled in the saddle? Always be safe. Not sorry. Take your sweet time.

As I learned from working at Reedannland, make them get used to the mounting block first, and don’t just set it down nicely. Gently toss it so it makes a rumbling noise. It will never touch them. It is just a loud rumble. The more you toss the block near where you need it, the faster they learn that the block is not going to hurt them. It is like lines or a bridle; just some more equipment they need to become accustomed to being around. This is part of the desensitizing training young horses have at training barns, as well as the therapy horses my mom uses, though therapy horses are desensitized to a greater extent due to the nature of their jobs and the riders they teach. 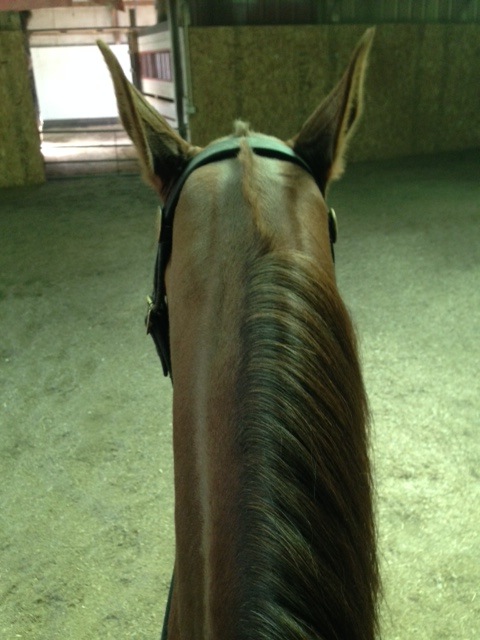 Here goes nothing! (This was after he walked off and I asked him to stop and stand.)

After a few throws of the block, Slider seemed to understand and stood still, softly chewing on the bit and giving me a sign of relaxation through his body language. I stepped up on the block, and he didn’t move. I grabbed the saddle and shook it around on his back. Again, he didn’t move, so I grabbed mane in my left hand and the saddle with my right, and swung up and over quickly. Slider walked off. I asked him to stop with a touch of the bit and “WHOA!”, which he did immediately. I was glad I was prepared for the worst and that it was only a walking off.

As I put him through his paces the first way, I was thinking, well this is pleasant. He isn’t pulling on the bit. The chambon worked! Hooray Erica, cookies for you! Goal accomplished.

It was soon time for the first way canter. I wasn’t wearing spurs, which I probably needed, because our canter depart on the left lead was a bit sticky. He trotted into it a few steps but then he got it. What a lovely canter! Rolling, head up, not pulling, even his ears were up every now and again. This is fun, I was thinking. What a steal. This horse rocks. We walked, backed up, reversed, and walked some more. Very pleasant, not wanting to pull on the bit. Our second way trot was even better. I asked him for it with a cluck and a squeeze of my calf muscles, and he obliged. We were trotting down the rail and I was pretending we were at Louisville (again I have never shown there but one can dream!) I was feeling really pumped about myself now. Wow, yeah, go me. I can train this horse and this is easier than I thought. Then it was time for the right lead canter.

It was something between a slow gait, a pace, and a right lead canter. A mystery gait, if you will. If it was a carnival ride it would have been a rickety roller coaster that throws you in ten different directions at once. We would alternate between a slow gait, and then shuffle step into a canter, and then amble our way into a gait that felt like the horse had grown a fifth leg. After about fifteen minutes of me stopping, re-cueing, circling, trying, and working my butt off, he stumbled his way into a “gah-lumpy” canter that felt like a camel running over the Sahara. We cantered a few laps this way, and then I stopped him and petted him for his attempt and hopped off.

I’m not sure who was more tired – Slider from all his failed right lead canter attempts, or me from trying new ways to get that canter. As I put him away I made a mental checklist of all my goals for him. The top of the list? Get that right lead canter. 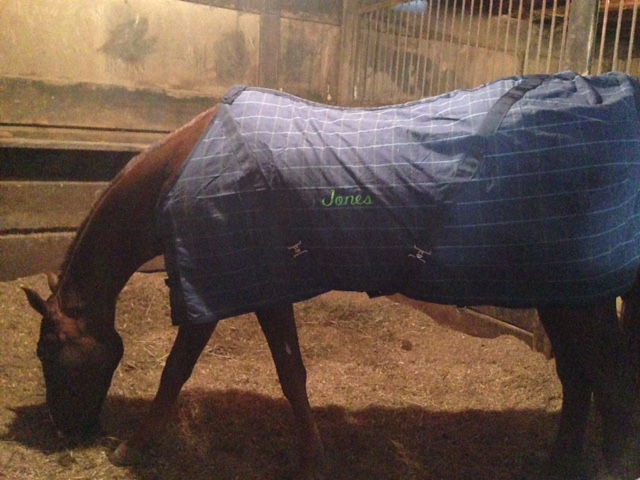 Slider's new blanket. He gets to be a Jones nine months before I do!

I am a very determined person. Sometimes I am overly hard on myself, as many of my friends and family can tell you. I have made it my goal to get that canter better and better each time I ride him. The game plan will be to wear spurs, help him determine which shoulder he needs to lead with by picking up on my inside rein as the leg is about to move, and cueing him right before that leg is to be picked up so his back left foot is initiated. I will research some dressage sites that have been helpful to me thus far and share them. I also plan to turn him in a small circle to unbalance him and make him pick up the correct lead, because he does it when he is long lining. Lastly, and most importantly, after he picks up the canter and we canter a few laps, I will halt, praise, dismount and praise some more. Therefore he learns that once he does his job and does what I ask, he gets rewarded in two ways: he gets attention and positive petting, and he is rewarded by being done because his lesson is over. By using positive reinforcement, I hope to help him understand what is asked of him. Good things happen to you, Slider, when you do good things.

Lastly, it is now the middle of September. The fall leaves are coming, and so are my engagement pictures. My fiancé and I had a small chat, and decided that even though Slider is part of our family, we are not going to include him in our engagement photos like Caraman was going to be. The only reason for it is because he is still so skinny. We want to take some professional photos later on, when he looks a little fatter. He has come a long way, but still has a ways to go. Maybe I will hold Slider’s bridle or something. Or if he has enough weight in two weeks we will, but it doesn’t look promising. I was looking forward to having Slider themed engagement pictures to share here.

Slider is losing his summer coat and is starting to get fluffier, too. Winter is on the way. He is styling his new sheet for the fall, with my to-be last name on it. I didn’t feel like ordering a new one next year, so Slider gets to be a Jones nine months before I do. Hardly seems fair!