Photo by Julia Shelburne-Hitti.Each day you arrive at the barn your horse allows you to stick your foot in the stirrup and swing up onto its back. At a horse show, your mount trots proudly into the show ring, often down an enclosed chute into bright lights and the sound of hundreds or even thousands of cheering people. To lifelong equestrians these events probably seem commonplace, but in truth they shouldn’t seem anything less than astounding, because both these examples portray an animal that is doing what its human asks, and actually dismissing some of its own instincts to do it.

What is it that allows horses to do things that should rightfully terrify them as prey animals? It’s another instinct, and one that trumps all others, including flight instinct: herd mentality. It is this deep emotional bond that has allowed horses to set aside their other instinctual fears and become – from the battlefield to the show ring – the greatest partner man has ever known.

Kerry Thomas knows this better than most, as he has spent twenty-five years researching equine behavior. While Kerry calls himself a sensory soundness and herd dynamics expert, he has also been called a horse psychologist.

“I’m the only one in the world that focuses on what I do, so there is really no title,” he said.

While most people focus on the physical soundness of a horse, Kerry chooses to focus on what he calls sensory soundness, which includes personality traits, how the horse handles stress, and their capacity to learn and assimilate to different environments.

“I do all kinds of work evaluating for breeding programs, racehorses and show jumpers,” he said. “I don’t usually get the easy cases because they don’t generally call in the horse psychologist for easy cases.”

He didn’t start off intending to study or work with horses. In fact, with an eventual goal of working for the National Parks Service, he began studying large predators in Montana and Wyoming, such as mountain lions and grizzly bears, and it was these predators that led him to the prey. 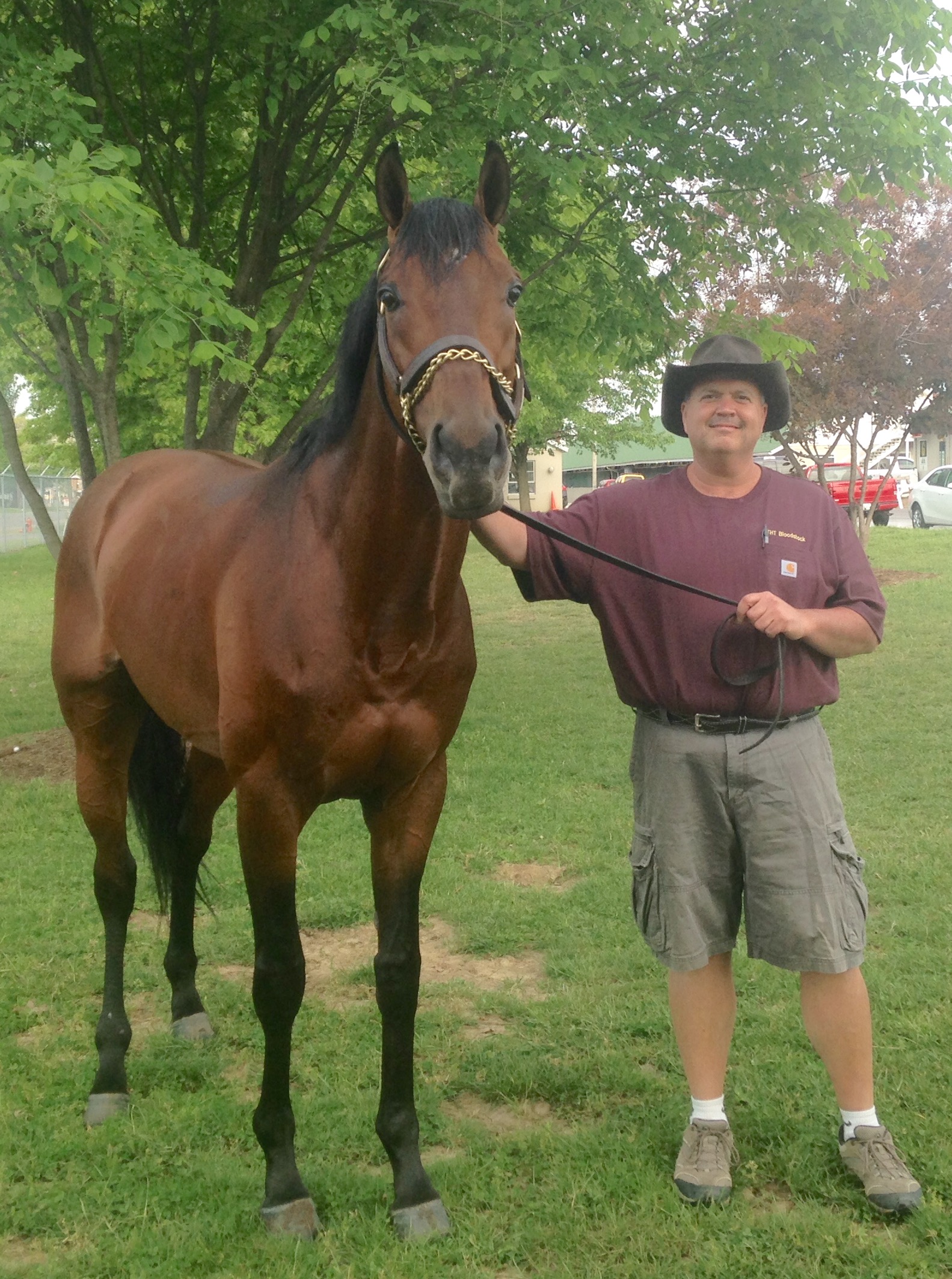 Horse psychologist Kerry Thomas evaluates horses for clients through his company THT Bloodstock. He says that herd instinct plays a large part in how willing a horse is to work with humans.

Some of his study subjects included nearby herds of wild horses. Growing up in Pennsylvania, he had been around horses his entire life, and over time he began using his research to answer one specific question: how does this wild animal blend into our domesticated world? What Kerry learned through his research was that it wasn’t the physical horse, but the mental horse that made the difference.

“It’s the horse’s ability to assimilate in the environment and herd hierarchy that has a lot to do with how they’ll respond to environmental changes,” Kerry said.

He founded Thomas Herding Technique in 2008 to share this knowledge with others, but when he found himself working a lot with racehorses (even Derby and Breeder’s Cup contenders) he renamed the company THT Bloodstock, to better reflect this focus on the equine athlete. He has minimal experience with saddle seat horses, but works with show horses in many other areas such as eventing and dressage, including some horses that compete at the Devon Horse Show. Regardless, his research applies to all horses.

“The work we do is for the horse; the discipline comes after,” he said. “The horse’s ability to adapt and assimilate is extremely similar across the disciplines.”

And when you’re asking a horse to do something that goes against its instincts, Kerry said what all equestrians already know – it comes down to a trusting partnership.

“In the wild they have to be able to tell the difference between a mountain lion and sagebrush,” Kerry said. “If they can’t figure it out themselves, they will depend on the partnership they have with their environment, i.e. another horse or the rider. The rider is one of the stress absorbers for the horse. As the rider you are not just part of the physical act, but the emotional act.”

That’s why three horses in a field might raise their heads at a noise, but put them back down once they realize another horse is continuing to graze, Kerry said. Horses look to their human partners in the same way. “It is far more natural than what you would honestly think,” he said. “They are herd animals, so they are going to go with you if you’re a good leader.”

“Horses are social animals, and that’s why they are trainable,” Smith said. “They will treat us as a member of the herd in a social way, and once we prove that we are worthy to be their leader, they will follow their leader. That’s why you see horses that will charge into battle or charge around the show ring or charge around the racetrack – because they feel well led.” 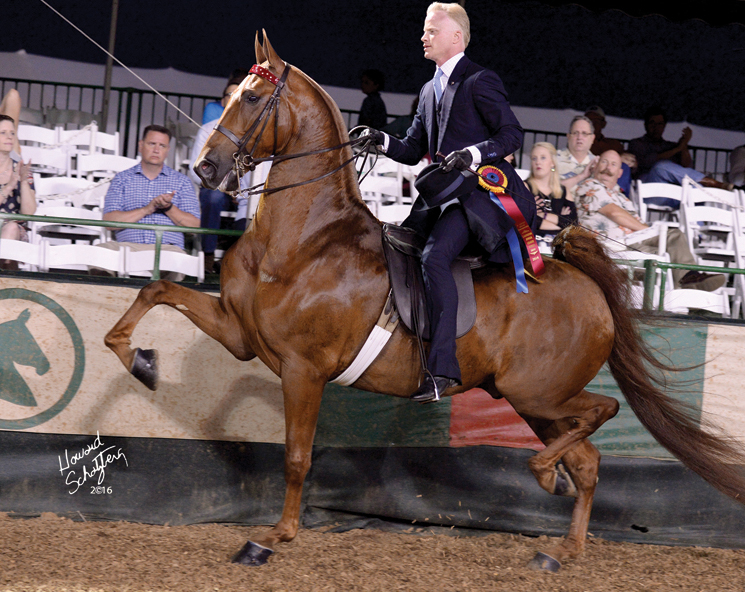 Smith Lilly of Mercer Springs Farm has trained numerous World's Champion horses and riders and believes that you become a horse's leader by earning their respect and trust. He is pictured here aboard World's Champion Tango's Token Kiss.

As prey animals with a flight response, horses should rightfully run from anything that scares them. Even the simple act of allowing a human on their back should seem like life or death, harkening back to their days in the wild when mountain lions would attack by leaping onto a horse’s back. But it is this emotional tie that allows horses to set aside this fear and do what their rider asks of them, no matter how out of character that request might be.

Many of those horses were American Saddlebreds, and for very good reason.

“We want our show horses to go through the gate with the cheering and the camera flashes and want them to thrive in that environment,” Smith said. “Saddlebreds are particularly courageous, and that’s why they were used in the Civil War, and why they’re good at being show horses.”

But to some degree, bravery is also a characteristic that can be developed.

“It’s really fascinating how horses learn and become assimilated to these environments,” Kerry said. “It’s not a shock to them; they know what’s expected of them.”

This ability to allow their relationships to override their other instincts is fairly unique to the horse. There are a few other prey animals such as camels and goats, which also live within a herd structure, that share a similar relationship with humans, but predators, which usually live alone, are generally incapable of this sort of relationship; dogs may be a notable exception thanks to their pack mentality and centuries of selective breeding.

“There are some other animals that do it, but horses are very adept at it,” Kerry said. “That’s one of the reasons horses have formed such a strong partnership with us.”

And, since the horse was domesticated seven thousand years ago, this ability has only gotten stronger.

“It’s genetically encoded in the horse now to be a willing partner with humans, because the ones that weren’t didn’t get bred much,” Smith said. “You’re left with horses that are generally comfortable and confident in the care of humans. Herd instinct and the instinct that has been bred into these horses to be cooperative comes out fairly quickly with good handling.”

Even so, some horses are still better at this than others. At THT Bloodstock, Kerry has found that there is a correlation between this ability and the horse’s natural level within the herd, or herd dynamic.

“One of the main services we offer in profiling and evaluating the horse aside from their sensory soundness, is their herd dynamic,” Kerry said. “This is a key element in determining the individual’s ability to optimize their physical talents, and their ability to have a more advanced relationship when partnering with their humans in new environments.”

Horses from the upper middle to upper herd levels generally make the best show horses, but regardless of where your horse falls in the herd hierarchy, it is important to establish that you are the “herd leader.” According to Smith, horses look for leaders that they can both respect and trust.

“If you’re the herd leader and run your herd into a pack of predators, the ones left over aren’t going to follow you too far,” Smith said. “If you have terrible workouts and your horse finishes miserable day after day, they’re not going to want to follow you.”

“You start with what’s easy, and you teach the horse the basics and get them comfortable with that,” Smith said. “Little successes make it easier to get the next one.”

During this process it is important that you never over face the horse, and reward him when he follows you correctly.

“You have to set yourself up as a leader by asking the horse to do something you know he can do,” Smith said. “Nothing bad happened and in fact something good happened because he gets a reward. And now you’re the leader because you led him there.”

Once you have established that relationship with a horse, your future as a team becomes virtually unlimited. From the barn to the show ring to the trails, your horse will prioritize your relationship even above his instinctual fears. For riders this should be both absurdly beautiful and slightly terrifying; even after a lifetime working with horses, it is something that Smith does not take lightly.

“When a person or a horse gives you their trust, along with that trust comes responsibility,” he said. “I think it’s a great responsibility to lead them well.”