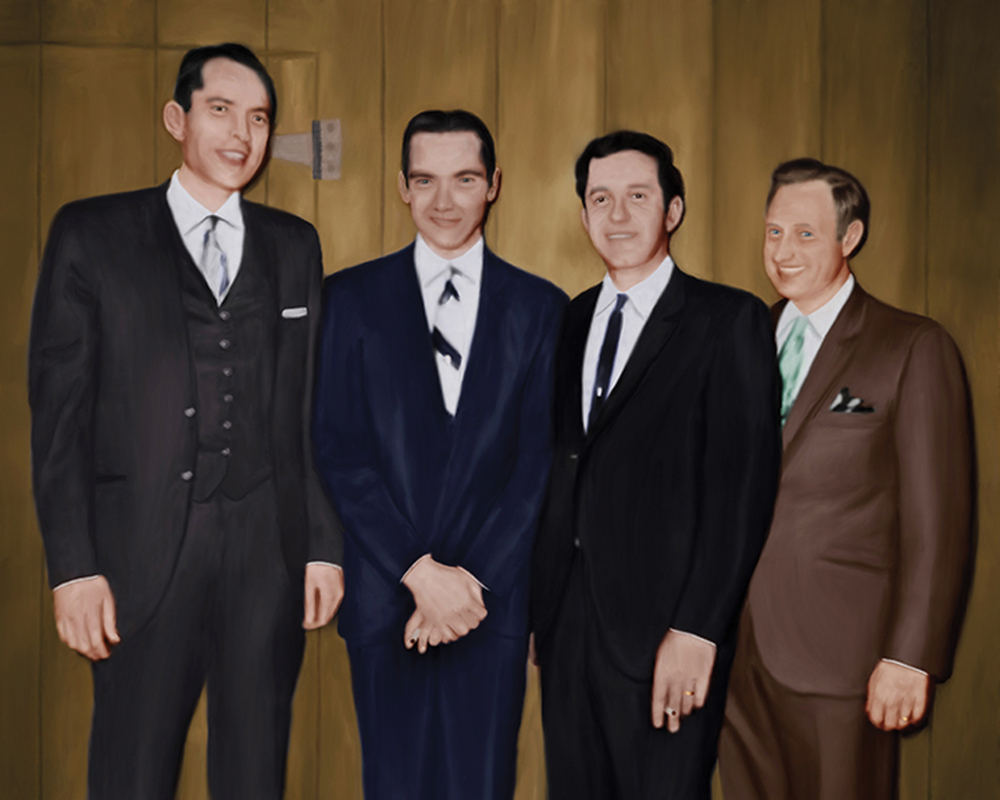 Like many great stories, the story of the United Professional Horsemen’s Association began at a bar.

Today, this professional organization works to improve horse show condi­tions, creates and funds various pro­grams and scholarships, and provides leadership, advocacy and vision across multiple saddle seat breeds. But in 1967, it was just an idea tossed around by a group that recognized its need but never quite believed it would work … until it did.

Its motto, “Horsemen Helping Horsemen,” had a lot to do with that success. From the very beginning, the UPHA has epitomized that motto, and, while the story of its founding is one of struggle, daring and vision, it is also one of teamwork. This teamwork is the thread that binds the UPHA’s past and present, and ensures that its story is far from over, even now.

Shirley Parkinson, of Rex Parkinson Stables, was among the group of trainers that gathered at the bar that fateful day in 1967, and she said the mood was one of dissatisfaction.

“We had just finished at a horse show where things were pretty bad,” Shirley said. “We got to talking about how bad it was, how something needed to be done about it, and how to go about doing it. That’s how it all came about — trying to make a better way for showing horses.”

There had been attempts at a professional horsemen’s association before, and they had all failed, so the group was dreaming big. The visionary behind these big dreams was trainer Tom Moore, and he continued to be a leading voice throughout the UPHA’s founding. However, Shirley feels that his wife and fellow trainer Donna deserves much recognition for the organization’s success as well.

“Tom has gotten most of the credit, but behind every man is a good woman pushing,” Shirley said.

When the group met again to finalize plans, they did so in Tom and Donna’s kitchen at Knolland Farm in Richmond, Illinois, but when it was time for the organization’s first official meeting on February 15, 1968, they went for something a little more formal — the O’Hare Inn in Rosemont, Illinois. At 8:30 p.m., a large group of professional horse people met in the hotel’s ballroom for, as the minutes say, “the purpose of discussing the advantage of a professional horsemen’s association.”

The meeting began with Tom introducing Sandy Sanders, president of the California Professional Horsemen’s Association, an organization that was four years old at the time and had found real success in working with show management for the improvement of horse shows. Sandy explained how his organization operated and organized itself, and took questions from those in attendance. After his presentation, the horsemen decided to form a similar organization to give a unified voice to horse professionals, address concerns and problems within the industry and improve conditions for all involved. 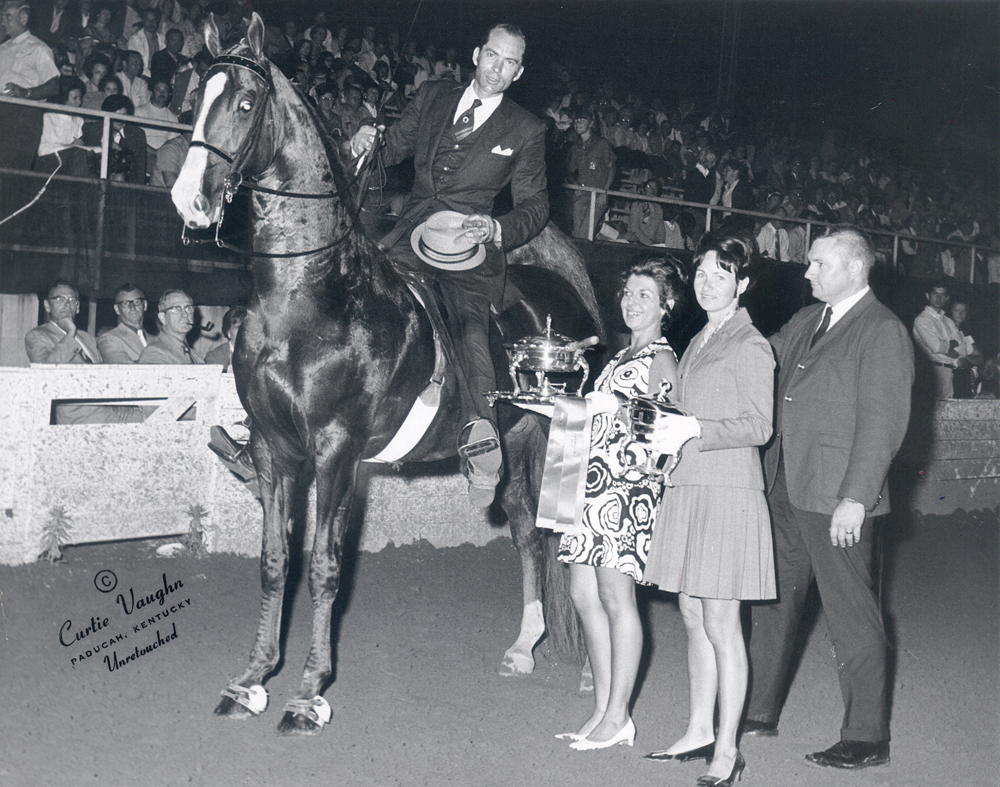 When it came time to elect officers, no one was surprised when Tom was chosen as the UPHA’s first president.

“He was nominated and there were no more nominations,” Shirley said. “He was elected unanimously. Everyone felt that he organized it and he had the mentality to put it all together, so he ought to be the leader.”

Chat Nichols was chosen as vice president, and Tom was allowed to appoint a secretary and hire a treasurer. He and Chat were also allowed to choose seven horsemen to form an organizing committee.

With the initiation fee set at twenty-five dollars and annual dues at fifteen dollars, the meeting was adjourned at 11:15 p.m.

It was at this organizing meeting that the UPHA name, constitution and bylaws were adopted. Ben Segalla was also appointed secretary-treasurer, but at some point in the future these positions would be separated and Don Brockman would be selected as the organization’s first secretary.

Though she was juggling the normal responsibilities of running a show barn and taking care of their small children, Richard Durant’s wife, Jeanette, remembers attending many of these early meetings with her husband, as they were both eager for improvement.

“Everybody wanted to promote the horse business and do the best that we could,” she said. “That’s what the UPHA was about. We were there to promote the saddle horse industry.”

The first chance to do so on a large scale was at the annual UPHA convention in January of 1969. Braving a tremendous snowstorm, approximately 139 professionals con­verged upon the Pheasant Run Lodge in St. Charles, Illinois. Despite the nine-degree weather and Donna Moore’s broken ankle, the event ran smoothly. 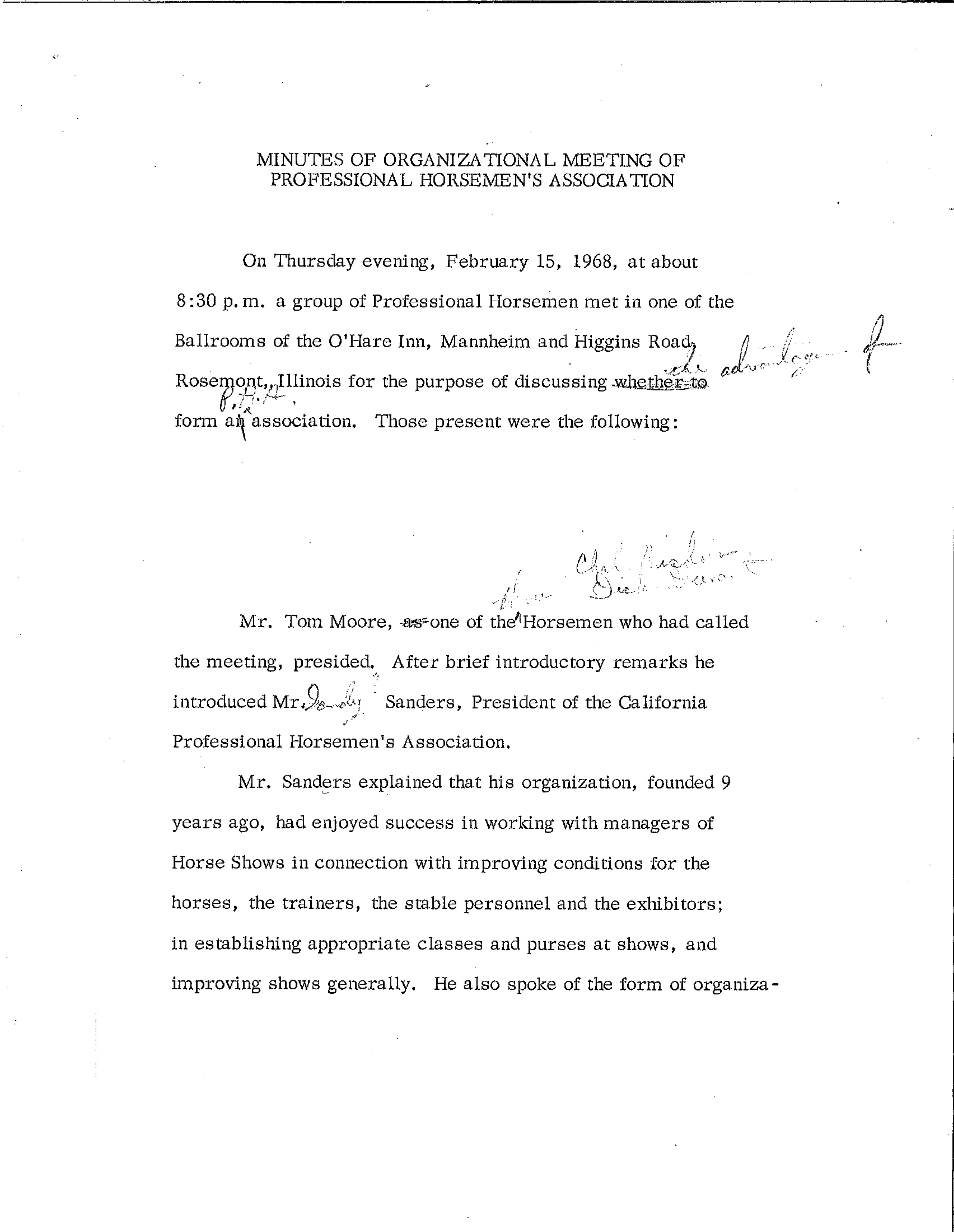 Minutes from the first meeting.Attendees began arriving early on January 7, mingling over coffee and doughnuts in the hospitality room and trading stories of their nightmarish travels, with the official meeting set to start at 1 p.m. Though it was a closed meeting, select members of the press were invited to sit in, and an account by Saddle & Bridle correspondent Maxine declares that Tom Moore kicked it off with the words, “Meeting come to order, and no selling horses!” Topics of discussion included the advent of a “most improved” horse show award, the pros and cons of an insurance program, the proposal of an Amateur Grand Championship show, changes to the “time-out” rule and more.

According to Shirley, the biggest difference between the first convention and the conventions of today was the lack of award presentations.

“They came along gradually,” she said. “Each year it seemed like we added a few more.”

But, just like the modern day conventions, the day still ended with a party; seven o’clock found the members gathered at the facility’s bar, the Hayloft, for drinks, dinner and dancing. Some members headed home the following day, but many went on to Chicago for the American Horse Shows Association meeting, or to visit the facilities of local trainers.

Shirley deemed the event a success, and she wasn’t the only one.

“Trainers were very much in favor of it,” Shirley said. “They knew it was needed. Facilities at the horse shows were not good for grooms, owners or trainers.”

However, that didn’t mean that people didn’t have their doubts. The older trainers had seen various trainer organizations come and go through the years, each one eventually succumbing to the same fate — failure.

But this organization had one im­portant difference — it had Tom.

“Tom was a good leader,” Shirley said. “We were trying to put together a group that everybody said would fail. Well, so far it hasn’t.”

In the forty-eight years since its founding, the UPHA has expanded to over two-thousand members and twenty-one regional chapters that include all fifty states and Canada. Today, the UPHA consists of three separate entities, the UPHA Membership Organization, Inc., the UPHA Foundation, Inc., and the Dewey Henderson UPHA Benevolent Fund Trust, a public charity.

The Membership Organization pro­vides services for the benefit of the members, continuing to improve horse shows by advising on everything from show scheduling to lighting and footing. It also helps sponsor the UPHA Classics Grand Championship each fall, and began the UPHA Classics Jackpot Sale to promote the breeding and sale of young Saddlebreds.

President Tammie Conatser is proud of the work it continues to do.

“UPHA, like other trade organiza­tions the American Bar Association and American Medical Association, to name a few, strives to improve the profession of horseman, instructor, and manager by educating and advocating for its members,” Tammie said. “I am proud that UPHA is a diverse, forward thinking leader for its members, both professional and associate.”

There is much to be proud of in the organization’s charitable branches as well. The Dewey Henderson Benevolent Fund provides funding to horse trainers in need, while the UPHA Foundation supports all aspects of the horse show industry. Through the years, it has provided educational scholarships to children of UPHA members through the Maria Knight Scholarship Fund, contributed to equine health research and numerous riding for the handicapped programs, and supports the American Saddlebred Museum, American Morgan Horse Institute and Building Funds, American Horse Council, and the horse pro­grams of the National 4-H Council. The UPHA has also raised money for other good causes through the Ribbons Of Service Program, which supports St. Jude Children’s Research Hospital and the Pink Ribbon Program, which raised money for breast cancer research, and it serves as the official horse wish granter of the Make-A-Wish Foundation.

Tammie believes that the UPHA organization came along at just the right time.

“In the 50s and 60s, the majority of professional horsemen worked for private farms or riding clubs,” she said. “As times changed and professionals opened their own businesses, UPHA has provided a unified, focused voice for advancing the profession and its practitioners.”

And — perhaps the best part — the UPHA is still growing. It is seeing increased foreign participation with its recent expansion to Canada, and is constantly striving to create more opportunities for its members.

“As agribusiness declines, our mission becomes more important and more focused,” Tammie said. “UPHA wants to ensure that better conditions and opportunities exist in the future.”

And, as Tammie sees it, the future is wide open.

“There is no limit to what the UPHA can become,” she said.