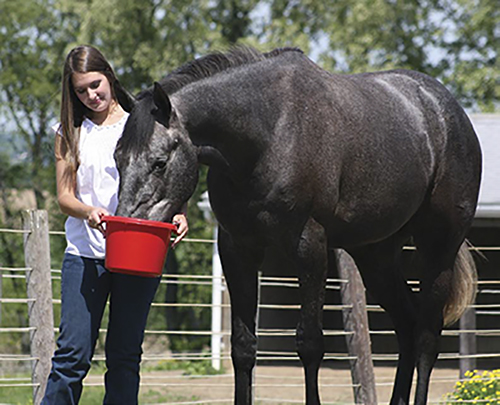 Some horses are fussy eaters and it can be difficult to find ways to get them to eat enough food. Some individuals don’t eat enough if they are confined (rather than out on pasture) and it’s hard to keep weight on them. This is a common and often challenging problem, especially in hard-working performance horses that need a high level of nutrition, according to Bill Vandergrift, PhD (an equine nutritionist who works with several feed companies, including Triple Crown).

“In my experience—looking at palatability of feeds and why horses become finiky—there is usually some reason. Usually the horse is already on a good diet and historically has been eating well, and then all of a sudden is not eating as much or doesn’t want to eat a new feed, especially if the owner, manager or trainer decides to add an additional supplement to the feed. The horse may be taking longer to eat or not cleaning up the feed,” he says.

“Any time we run into this problem, the first thing that we think of is some type of GI tract inflammation. This could include gastric ulcers, hindgut ulcers/inflammation,or small intestine inflammation. All three of these situations need to be treated a bit differently.”

So when a horse goes off feed or eats less enthusiastically, a person needs to find out if there’s a physical reason, and what it might be.

“Most horses that suddenly become fussy have some kind of physical anomaly going on, especially if you haven’t just changed feeds. Hard-working horses put a lot of stress on the digestive tract. Research has documented that physical exertion can be a cause of ulcers. It shifts the electrolyte balance in the gut and there are many kinds of physiologic changes when you put a horse into hard work, many of which will have a negative effect on digestion,” he explains.

“The rate of fermentation in the large intestine and the ecology of fermentation (the balance of microbes) have a direct effect on the horse’s appetite. If I have a horse in which the rate of fermentation has slowed down, for example, the bacterial population is just not functioning at the same rate it was earlier—and this will reduce his desire to eat. He won’t clean up his feed the way he used to, and won’t eat as much as you’d like him to. And if you add a new supplement, he may not even touch the feed. This also reflects what is going on in the hindgut,” says Vandergrift.

“There may be a shift in the rate of fermentation, but there can also be a shift in the ecology—a change in the pH, which changes the microbes. Generally if the pH in the large intestine drops below 5.9 (too acid), you see a big change in the horse’s appetite, attitude and performance. Likewise, if the pH gets much above 6.6 or 6.7 (too basic) this also shifts the ecology and fermentation. For optimal fermentation, the pH needs to be between 6.0 and 6.5. Due to the stress and electrolyte shifts that take place in some performance horses, it’s not uncommon to see the pH go too low or too high. When it does, it will have a direct affect on appetite—and this is just the hindgut.”

Gastric ulcers (in the stomach) are common in performance horses, and this has been well documented.

“A high percentage of performance horses have gastric ulcers, and a horse with ulcers will be a picky eater,” says Vandergrift.

The horse experiences discomfort while eating, because of the ulcers. The small intestine is caught in the middle.

Thus there are several physical reasons that can affect appetite. The challenge is to figure out whether the horse has gastric ulcers or not, or a hindgut that’s not functioning correctly.

“It’s a little tougher to diagnose a hindgut problem. We find that a lot of trainers, riders and veterinarians are not yet keyed in to picking up on when the hindgut is a little out of whack. The veterinarians basically look at it from the standpoint of more obvious physical problems. If they look at the hindgut with ultrasound and can’t measure any increase in thickness of the mucosa, and the horse doesn’t have diarrhea, they think the hindgut is OK,” he says.

But it may be a more subtle problem, and we need to catch it before it gets to be a serious problem.

“What we look for is attitude change or appetite change. Most of these horses will still try to give you what you ask, and do their job, but you’ll notice that they are not giving you as much as they did before; they are not at the top of their game. Sometimes you might find that when you tighten the cinch they become grumpy. The ears go back, they’ll flip the tail, and in severe cases the hind foot may come up, or they’ll turn around and bite you. In severe cases we have seen well-trained horses begin to rear and literally flop over backward under saddle due to severe discomfort in the large intestine,” says Vandergrift.

“When it’s the right dorsal colon, we often get a lot of comments from riders that when they put the right leg against the horse he gets grouchy. So this is another key thing we look for, to determine hindgut problems,” he says.

“Some of these horses tend to just nibble at their grain and then leave it and go eat their hay instead. They’d rather eat forage than the concentrate part of the ration. When we observe this, we are pretty sure it’s a hindgut problem, especially if the manure has a different odor and/or consistency,” he says.

“With gastric ulcers, by contrast, when the horse eats grain he suddenly acts like his stomach is bothering him. He might even act a little colicky and lie down, then get back up and eat some more. Just observing the horse may help you determine whether you are dealing with a gastric situation or a hindgut problem, but some horses have both,” he says.

“Another common situation is when a horse shows reduced appetite and the trainer thinks it’s due to gastric ulcers and treats the horse with Gastrogard or omeprazole and the horse improves—and then reverts right back to fussy eating again when the treatment is discontinued. When I hear this comment I know the horse has a hindgut problem. If the large intestine has a low pH (too acid) and you put the horse on Gastrogard, and reduce the gastric load from the stomach entering the hindgut, that horse will show improvement because you are bringing the pH back to where it needs to be. But as soon as you stop the Gastrogard and stop the inhibition of acid secretion, the pH drops back down again,” he explains.

“For horses with hindgut problems we use prebiotics and probiotics. We also use different dietary components. We are trying to do three things. First, we are trying to reestablish fermentation with the probiotics and prebiotics. Second, we try to improve the immune system of the gut so the intestinal tissue can heal itself. Third, we try to provide anti-inflammatory components in the diet to help resolve the inflammationin the stomach or in the intestines. You want something in the diet that will act as an anti-inflammator, and Omega-3 fatty acids work very well for that, specifically EPA that is found in fish oil” says Vandergrift.

“These are some of the physical things that can affect appetite, beyond the basic things we look at first such as teeth or some underlying health issue.”

CHANGING FEEDS—If the owner is changing feeds or adding supplements, the horse may be reluctant to eat the new food just because it’s different. If the new ingredient is added gradually, the horse is more likely to eat it. Many horse owners don’t take time to adjust the diet gradually, however. Feeding directions on the supplement might say one scoop per meal. But if you give the horse a full scoop the first time, he may not want to eat it because the taste, smell or texture is unfamiliar. It’s best to add just a small amount at first—if it’s a supplement—or mix just a small amount of the new feed with the old feed, and then gradually increase it as the horse becomes accustomed to the new flavor, smell, or texture.

“Another thing that often works is to just dampen the food, adding a little water. This can help, especially with powdery or granular-type supplements. This tends to minimize the odor and helps stick it to the feed so the horse can’t sort it out and leave it. It is amazing how well a horse can sort his food,” says Vandergrift.

“Some people add a little molasses or applesauce—whatever the horse really likes. This is fine,but in many cases all you need to do is simply offer a small amount at first, wet it a little, and after a couple days add a little more, until you get up to the recommended feeding rate. There are many supplements that if you wet them just a little, moisture will improve palatability, and I’m not sure why. It may change the odor, and may even change the taste,” he says.

You may need to experiment to find what works best for the individual horse, to figure out what he will eat.

“Horses are like kids, with adamant likes and dislikes,” says Vandergrift.