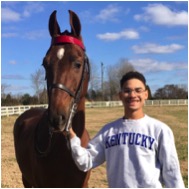 Goode is an enthusiastic rider and great ambassador for the breed. He started riding at age 10 at Cash Lovell Stables and won many titles including the 2018 National Academy WT Champion and the 2020 National Academy Alpha English Pleasure Qualifying Champion. During high school, he was a member of the National Honor Society and served as a cappella group director and received an award for best male soloist in 2019. Additionally, he is an Eagle Scout and was active in scouting.

Currently, Goode attends the University of Kentucky and is majoring in Equine Science and Management with a minor in business. In addition to his studies, he is a member of the UK Saddle Seat ISSRA team and an active member of UK’s MANRRS (Minorities in Agriculture, Natural Resources, and Related Sciences) group, where he works to create safe spaces and service activities for students. His work with the American Saddlebred and the community in general shows a great enthusiasm for the breed and the community.